The Man Who Turned Around the Royals

RUSH: How many of you were able to stay up for the entire 14 innings of the World Series game last night? That game ended about a half hour before I go to bed anyway, so I was in no sweat. I had no trouble whatsoever. But it was just a great game. The Kansas City Royals are just an amazing transformation over what they were just five years ago, and there’s a reason. There’s an absolute reason why the Royals have done a 180 and bounced back and become a real baseball team to get to the World Series. His name is Dayton Moore, the general manager of the Royals that came over from the Atlanta Braves. He was working with John Schuerholz, who used to work with the Royals back in the days I used to be in charge of ceremonial first pitches there — and National Anthem singers, too. I did that.

RUSH: Overland Park, Kansas City, where I used to have a shack and live — and there aren’t any shacks in Overland Park, except the one I had. Sarah, it’s great to have you here. How are you?

CALLER: Well, I’m great, Rush, and it’s great to talk to you again. I’m honored. Thank you for taking my call —

CALLER: — and about one of my favorite subjects. You are showing favor to the Kansas City Royals, and I expect you to watch tonight because we’re gonna do some more magic. But it’s been great.

RUSH: It’s a great team. They never give up, and you can’t count ’em out. If it takes singles and walks, they capitalize on every error. I mean, it’s such a marvelous turnaround that they have made. I mean, they were the joke of baseball for so many years, and it is a turn. Starting in 2006-2007, this team’s become — with nowhere near the biggest payroll in baseball — one of the best, solid quality baseball teams playing a unique kind of game that’s out there today. It’s a great World Series, too. It’s gonna shape up to be one. Yeah, I know. Kansas City is a town… Self-esteem in that town is defined by how well the sports teams do. When the teams are winning there, there’s no place in this country better to be than Kansas City, Missouri.

CALLER: That’s right. That’s right. It’s glued the town together. It’s brought everybody together, and everyone’s so excited about it. It’s a nice distraction from everything going on 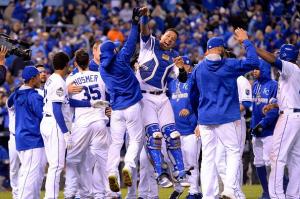 in Washington. I just love it that you love the Royals and talk about them. I’ve been waiting for you… I’ve heard you mention them a couple times, you know, this season in the postseason again, and we’re just so excited. They’re the definite underdog throughout the season. We won the division this year, and you’re right. You’re absolutely right.

RUSH: Well, you go back to the beginning of the season; the experts in sports media were predicting the Royals to barely finish fourth in their division. It was a fluke last year.

RUSH: They really weren’t that good.

RUSH: And all it did was motivate ’em. Look, they’re steady. They’re solid. As I say, I mean, it’s hard to credit one person for a team performance. But you can’t leave out the role Dayton Moore has played. Is a serious general manager, he came from a great baseball background Atlanta Braves, Schuerholz. And he’s really… If you have to say, “What’s the difference? What’s new?” here what’s different today, since 2006. Prior to that, it would be Dayton Moore.

CALLER: It’s right. You’re right. He’s an honorable man. He’s just brought everybody together. He’s made trades, you know, that at the time don’t necessarily go. What? You know, not big names.

CALLER: You don’t have tons of money.

RUSH: But, look, they put the scouting system back together.

RUSH: A bunch of stuff was gutted when “Mr. K” died, and the ownership had a whole different view of the existence and the purpose of the team. And Dayton Moore comes in and they put the scouting department back together, and all of the developmental things to find young players and develop them themselves. They put that all back into the process, and it took a while for it to come to fruition, but it has. And, Sarah, I’m out of time, but I’m glad you called. And I know. When the teams are winning in Kansas City, folks, there really is no better place to be.