Cruz Explains the Concept of Winning

RUSH: Brit Hume tweeted — I’m paraphrasing — “Ted Cruz going on and on about all these fights that he’s led. Well, that isn’t any big deal. How about the fights that you’ve won? The answer to that is none.” A Fox News commentator watching the debate Wednesday night and that’s what he noted.

So last night on Fox Special Report with Bret Baier, Ted Cruz was invited to appear. Ted Cruz showed up because Ted Cruz goes everywhere. Ted Cruz is not afraid to answer tough questions no matter who poses them. You have to hear this, folks. If you missed this show last night, you have to hear these sound bites. Bret Baier says, “You definitely have led fights against Obamacare, against immigration, against the EPA, but Obamacare is still around, immigration’s still exactly the same.” In other words, he picked up Brit Hume’s tweet and he’s basically saying, “Yeah, you’ve led a lot of fights. You haven’t won any of them. So what do you say about that?”

CRUZ: Must be very clear on immigration. I led the fight against Obama’s amnesty, against the Gang of Eight bill which was championed by Barack Obama, by Chuck Schumer and Marco Rubio. And I led the fight standing side by side with Jeff Sessions, and we defeated it in Congress. Amnesty did not pass. So you want to talk about fights —

BAIER: So a block is a legislative win.

CRUZ: Blocking something that is bad, that is harmful, is good.

RUSH: So blocking, you’re counting that as a win? We all did, I mean, we have the minority, we don’t have the majority, and we stopped the Gang of Eight bill. Ted Cruz led the fight against establishment. We would be living under amnesty right now if Cruz had not succeeded. But they said, “Well, that’s not a win. I mean, you’re calling blocking legislation a win?” Cruz said, “Blocking something that’s bad, that is harmful, is good.” And he continued.

CRUZ: Following the tragic shooting in Newtown, Connecticut, the Democrats came out with a massive raft of new gun control proposals. I led the opposition against it. I remember Chuck Schumer being on Sunday shows saying they were in the sweet spot, nothing could stop this. We defeated every one of those proposals on the floor of the Senate, defending the Second Amendment right to keep and bear arms.

RUSH: And he had another example, Israel.

CRUZ: I’ll give you another example of standing and leading a fight and winning. If you’ll recall, when Israel was facing rocket fire from Hamas and the Obama administration canceled all flights to Israel, and I publicly called them out and said, “Did the Obama administration just launch an economic boycott on Israel?” They haven’t done this for Pakistan, for Yemen, even much of Ukraine, and this was just months after a passenger airliner had been shot down with a Russian Buk missile. Why did they put discriminatory efforts on Israel, within hours the State Department’s being asked is this an economic boycott on Israel, the heat and light and pressure became so great that they lifted the flight ban within 36 hours.

RUSH: So you haven’t won anything. You’ve led a bunch of fights but you haven’t won anything, and he’s able to recite, rat-tat-tat without a single stutter, without forgetting where he was and what he was saying three different occasions where he has stopped the left in its tracks, which is what Republicans were elected to do in 2011 and 2012, although they didn’t win, and 2014. This is what they were elected to do was to go there and stop. Before you can reverse direction you have to stop the direction you are headed in, and Cruz has mounted the efforts. 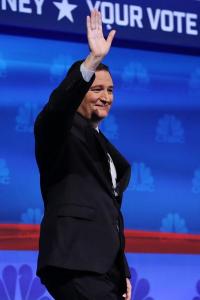 But I think it’s noteworthy that an effort was made to cast aspersions on his efforts, when he’s the only guy in the Senate, or one of the very few who is attempting to stop any of this agenda of the Democrat Party. There’s one more bite. Bret Baier said, “You know what? The big thing about you that they all say is that you’re divisive, Senator Cruz. You’re just divisive and this is not the way things get done.” The question actually was: “A lot of people look at you, Senator, as a bit divisive when it comes to working with the other side.” This is Fox News. Please do not bombard them, folks, do not tell ’em I told you, whatever you do, it’s not necessary. I’m just making some observations here. I don’t need my own crap sandwich with these people. It is what it is here. I’m just stunned that you can’t work with the other side, establishment on parade here?

Anyway, Cruz had a great, great answer to this, and that’s what I want to get to. “A lot of people look at you, Senator, as a bit divisive when it comes to working with the other side, and we see that in social media. We see it in people who characterize you up on Capitol Hill.”

RUSH: Exactly right, but the point — I need to restate this, because it’s just simple common sense. Senator Cruz, they say you’re divisive. “Yeah, well, a whole lot of people disagree with what’s going on here, and I’m standing up against it. The only way not to be divisive would be to sacrifice everything I believe in agree with this stuff. Is that what we’re here to do?” This is exactly what everybody thinks is wrong with compromise and working with the other side. That’s the definition of not being divisive. Getting along. 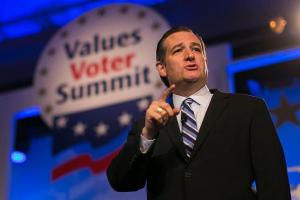 But you see what a dirty word it is. “Ohhh, we can’t have divisive figures! Divisive figures, what do they do? They anger the independents! Yes! And then what happens? Why, the independents, why, they leave immediately. They’re rock solid in the Republican camp for some reason, and then the Republicans disagree with what’s going on in Washington, and the independents don’t like it. And they cut tail and run over to the Democrats.” Is that how this works? “And you throw government shutdown in there? That’s the… (laughing) I mean, that’s a king-of-the-hill definition of divisive.

You can cause heart attacks in the Republican establishment.

I love to remind people: Mitt Romney got the vast majority of independents. You’re probably tired of hearing me say this. It’s broken record. There are facts galore to counter the supposed belief system that Republicans have developed inside the Beltway. Mitt Romney got 60% of the independents. It wasn’t even close. It was wasn’t even close, and he lost the election by millions of votes, but he did the right thing to get the independents. This is why I have said over and over, folks, that these things the Republicans think they have to do to win the presidency are really well-designed brilliantly executed Democrat tricks.

“Democrats Like What They Hear from Paul Ryan — Democrats are welcoming Thursday’s changing of the guard in the House, expressing optimism that newly elected Speaker Paul Ryan (R-WS) will have better luck managing the rambunctious chamber than his predecessor, Rep. John Boenher (R-OH). The Democrats say they’re buoyed by Ryan’s debut speech calling for more comity,” c-o-m-i-t-y — that means togetherness, “and cooperation, hoping the power shift will bring a new stability to the chamber and grease the skids for future legislative successes.”

Can I translate? Do I even need to translate that? Okay, let me translate this. (laughing) TheHill.com: “Democrats say they are encouraged by Ryan’s debut speech calling for more agreement with them, hoping that this power shift will bring new stability to the chamber grease the skids for future Democrat legislation to be signed by President Obama.” That’s what they mean. But, see, we out here, we’re supposed to react differently. “Wow, man, everybody loves Ryan! That is great. Democrats love Ryan, now we can get things down. Okay, cool. Now we’re going places.”

That’s the reaction they want us to have.

“‘It was an aspirational speech,’ said Rep. G.K. Butterfield (D-NC), head of the Congressional Black Caucus. ‘He seemed to suggest that he wants to work in a bipartisan way, and I believe if he delivers on that commitment we’re going to have a better Congress and a better America.'” Let me translate that for you: “G. K. Butterfield, Democrat, North Carolina, head of the Congressional Black Caucasians, yeah, Ryan seemed to suggest that he wants to help us pass our legislation. If he delivers on that, we’re gonna have a much better Congress and a much better America, and we’re not gonna be bothered by any Republicans ’cause their voters are gonna abandon ’em.”

“Rep. Rosa DeLauro (D-CT) said she’s hoping Ryan’s allusion to the struggles of the working class will reignite the congressional debate over the minimum wage, childcare benefits and gender pay parity — issues Democrats have long promoted.” No, issues the Democrats invented and hold hostage. “Rep. Joseph Crowley (NY), who entered Congress with Ryan in 1999, was quick to hail the message. ‘It sounded an awful lot like a Democrat speaking,'” and he loved it!

RUSH: Ladies and gentlemen, I’m serious. Please do not send Bret Baier any e-mails, phone calls, faxes, tweets, whatever you do. It’s not necessary. He’s a good guy. He’s a nice guy. I like him a lot, and he’s just a journalist. He was asking Cruz questions. He’s asking Cruz questions that the Republican establishment believes. They were hanging curveballs for Cruz. It was a good exchange. Do not get mad at Bret Baier. It’s a great thing that those questions were asked, and the way they were asked, Cruz knocked ’em out of the park. Don’t get on their case there about it, please. There’s no anger here.