Caller: Rush Revere Made My Nephews Want to Read for the First Time

RUSH: My adopted hometown is next. Sacramento, California, Sandy, your turn, hello.

CALLER: Good morning, Mr. Limbaugh. This is such an honor to talk to you.

RUSH: Well, thank you. Thank you very much. I really appreciate that.

CALLER: Yes. I called to tell you how much I appreciate you writing those books. I have two nephews that if you ever told me they would sit down and read a book, I would have never believed it. But they argue over who’s gonna have the book.

RUSH: Really? How old are these nephews of yours?

RUSH: And heretofore up to now they have not shown an interest in reading very much?

CALLER: Never. I mean, they didn’t even read comic books.

RUSH: Well, I can’t thank you enough. Sandy, I’m so appreciative you got through.

CALLER: I tell you, you getting my boys to read is an honor. I tell you what, there are parents and aunts and uncles up there that love you for this.

RUSH: Well, it sounds like a miracle out there.

CALLER: It is a miracle. I didn’t think they would ever sit down with a book and actually sit there and not even turn the television on or play their games. They’re reading your book.

RUSH: Well, let me ask you this, Sandy. What kind of efforts did you or their parents make in trying to get them to read before this? I mean, how did you learn that they’re not crazy about reading? They’re still pretty young. How did you figure that out?

CALLER: Yes, I understand that, but, well, when they don’t want to read their own homework assignments and things like this, that was a good inclination there. But they listen to you with me when they’re here on the radio all the time.

CALLER: And they heard you talking about your book. So I was able to go buy one, ’cause I didn’t think they’d really read it. But now they won’t even let me borrow it.

RUSH: — you only have one to go around for everybody?

CALLER: Well, I’m on disability, so I couldn’t afford to get enough for all of them.

CALLER: So I figure I can get one.

CALLER: Oh, that is fantastic.

RUSH: And I’m gonna send you — we just got them because of popular demand — some of these young people reading the books have literally been begging us for a stuffed animal of Liberty, the horse, a cuddly stuffed animal, so we commissioned one. We had I can’t tell you the number of prototypes. I can’t tell you the number of manufacturers we took submissions from. And we settled on one, and it’s now available at RushRevere.com. I’ll enclose a couple of those, too. Sandy, thanks. Don’t hang up here. Mr. Snerdley will get your address in my adopted hometown. I’m not kidding you. We get a lot of feedback from parents who say that until these books came along, their kids were not interested in reading. 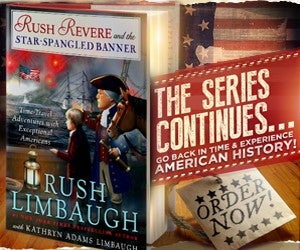 When that first started happening, I thought they were just being nice. You know, I just thought they were just being complimentary and all that. But we get so many of them, so many comments like that, “Your books are the first my kids have actually wanted to read.” There are so many of those that I actually now believe that it’s true. I’m not trying to impugn the people who have said it. People are complimentary and they say nice things, but we’re getting so much of that that I think it actually is a phenomenon related to these books. I think there’s something about them that these kids get into, and if I may say so, it’s the design.

I mean, this was the whole plan, was to write these books in such a way that the reader is not just reading somebody recite historical facts, but the way the books are written, the reader is taken back in time to these events via time travel with a funny, sarcastic talking horse and actually meets the people who made this country and they get to talk to them. Well, the students in the book get to. The reader gets to experience it. But they’re taken back to these events, and it actually is putting the reader in the story. And we have an added benefit in these books. The stories happen to be true, and they happen to be true about the founding of the country.

We get a lot of accolades, folks, not denying that, and we get a lot of praiseworthy reaction to these books. But one of the most meaningful is what Sandy here said, that her nephews didn’t have the slightest interest in reading until these books hit. And now they can’t get the books out of their hands and they want the next one to come out soon and so forth. It’s such a pleasant reaction that we’re getting from everybody who’s read this. Sandy, I thank you so much. I’m grateful that you were able to get through today.

Have to take a brief time-out now once again ’cause this is the fastest three hours in media, and it just rolls on.

RUSH: I know. It really is moving to me. I’m kind of speechless when I hear this stuff, but it’s amazing. We had a caller last week whose son was dyslexic, who just loves these books, and Sandy here, eight and 10 and they don’t like comic books, but they like these books. If you’ve got a young kid eight to 10 that doesn’t like comic books, you might think you’ve got a problem. But yet they like these books. And you know why, folks? I’m gonna tell you exactly why. This is the strategy that we had in putting this whole series of books together.

The point is to teach the truth about the founding of this country to young people so that they have a base knowledge and understanding as they’re going through school and hearing the opposite. These books, the Rush Revere Time-Travel Adventures with Exceptional Americans series, these books are immersive, which means it’s not just somebody reciting facts or trying to tell interesting stories. The reader is taken right to the events that we cover from book to book to book. And the reason I think these kids like it so much is when you’re young your imagination’s running wild. You don’t have any boundaries ’cause you don’t know yet what you can’t do. You don’t know yet what you want to do or don’t want to do, but everything in the world fascinates you.

So an adult reading a book about time travel, come on, get serious. To a young person, “Cool, man!” An adult, “What do you mean, a talking horse?” To a young person, a talking horse, sarcastic to boot, funny as heck. Even though there was a TV show once with a talking horse, Mister Ed, and it was pretty popular among adults at the time ’cause Mister Ed was kind of a sexist and it was okay to be back in those days. (interruption) (laughing) And his owner was a dork, you know, named Wilbur. The horse again was the cool one. But, no, they’re immersive, and since young people have these wild imaginations and incredible dreams about possibilities, all of this stuff to them is just really cool. I picked that up from some of the feedback as well.

So, anyway, thanks to everybody that’s sharing all that feedback with us. We’re immensely proud. A lot of work goes into these, and we really like them ourselves, too. So it’s great to get this kind of feedback.