Are Trump and Carson for Real?

RUSH: This is Ed, Mount Blanchard, Ohio. Great to have you. Glad you waited, sir. Thank you very much. Hi.

RUSH: Very well, sir. Thanks much.

RUSH: Well, it’s an interesting thing to me. I mentioned yesterday I heard this — a variation of your question — put to Newt Gingrich recently. It might have been on the one of the Sunday shows. It might have been Greta Van Susteren’s show on Monday night. I’m not sure where. But he responded to it this way. He said (summarized), “You know, it’s really curious about this. We’ve got these two guys, and they’re at the top, and in the case of Trump he’s been at the top since the beginning, since the day he got in.

“Ben Carson has been close to it or trending up and is now in the lead. Why is it…? And they’ve been in the lead more days than there are left until the Hawkeye Cauci in New Hampshire. Why is it that all the talk is about the two front-runners leaving, getting out, losing, and all the people at the bottom who are barely showing up being the real contenders?” He said he didn’t understand it. He’s never been in a race before where the people at the top are automatically just figured to be not real.

So I actually think that either one of them has a better chance at winning than a lot of people think they do simply because of the electorate’s — and it’s a silent majority. I don’t know how silent it is, but the genuine anger that exists over what happens in Washington inside the Beltway, the establishment all that. Yeah, I don’t think it’s out of the realm of possibility at all, to answer your question.

CALLER: We can only hope.

RUSH: What, do you think they can’t?

RUSH: Let me ask you this. If neither one of them can, if you are…? You’re probably not alone. You want one of the two of them to win, or do you want neither? 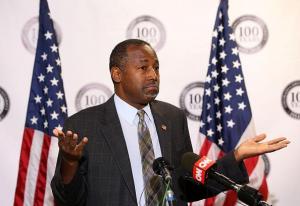 RUSH: You want Carson to win?

RUSH: All right, so you want Carson to win. I can understand. You’re thinking, “My God, this is so abnormal. This is so unlike anything we’ve seen before. It can’t be real.” And something’s gonna come along and slap everybody upside the face and normalcy is going to triumph again and Carson and Trump are gonna be either out of it or down at the bottom where, in a normal year, people think that’s where they would be. So you’re kind of afraid your team losing here. If that were —

RUSH: No, no. It’s a natural characteristic of human nature, I think.

CALLER: I just can’t see the establishment allowing either of those outsiders to win.

RUSH: Well, that’s the thing. If they had any say, what do you think…? You think they have been trying so far to get rid of either one of these two?

CALLER: Oh, yeah, but they got a year to go yet.

RUSH: Yeah, but there’s not much they can do.

CALLER: Bush is out, but they’re probably gonna go for Rubio or Christie. They’re gonna get an establishment candidate, is my thought. But I can hope for the best.

RUSH: If…? Let me just take it a step further, play a little hypothetical game here. Let’s say that Carson slips, somehow, some way. Something happens. Do you have an alternative? Do you have a second choice? Do you need to get that?

RUSH: You have a second choice if Carson somehow doesn’t make it all the way?

CALLER: Boy. Trump would be interesting. But my second choice would probably be Cruz.

RUSH: If you got Carson number one and then you want Trump, and if neither of those end up doing it, then you got Cruz. I think you just named the three most likely here at the top. But it’s hard for a lot of people to get their arms around this, because politics a business and people have been paying attention to it for their lives, and certain people always end up winning, and they are professional politicians who come from party organizations, and Trump and Carson are as outside that as anybody can be. 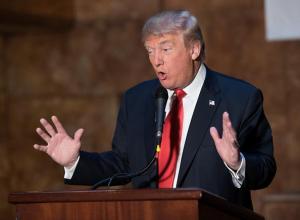 And here they are triumphing over all of it, and to a lot of people who love it, it doesn’t still compute. And so there’s some insecurity about it. Look at what you just said. “I can’t see the establishment,” the all-knowing, the all-powerful, whoever they are, establishment, “at some point is gonna come along and blow both those guys up.” You just know it. You’re just convinced of it because they’re your team, and be it the Super Bowl, the World Series, the Stanley Cup, everybody thinks their team’s gonna blow it. It’s a great fear people have even when sports is concerned when it supposedly doesn’t matter.

But I think Newt’s right. It’s a fascinating thing to listen to people talk about people who’ve done nothing but be at the top from the get-go to talk about them as illegitimate and they’re gonna fade at some point. Why? What’s gonna change? Is the electorate just making a statement now that they don’t really mean? See, people don’t think the electorate is in any way that coordinated, organized, or sophisticated. But you’re not the only one discombobulated by this.

The entire professional political business is upside down because of this.