RUSH: Here is Richard in Cleveland. Richard, thank you for waiting. You’re next. Your big show biz break here on the EIB Network. Hi.

CALLER: Good afternoon, Rush. Longtime fan of yours. Keep up the great fight.

CALLER: A few things I’d like to say here real quick. I work in construction, and I am 100% behind Donald Trump. Nothing is gonna shake me from Donald Trump. Carson is a good man, but I don’t think he’s an aggressive enough fighter. Romney was weak, McCain was weak, Dole was weak, and, you know, Bush and Kasich are weak, and they should take one for the team, do the right thing, and get out. I’d never vote for Jeb Bush, and, you know, we have to fight the Democrats aggressively as possible, and like I said I’m 100 percent behind Trump. Working in construction, me and my peers know that once the illegals flood in, that’s gonna destroy the wage scales, and we need a fighter to fight these Democrats as aggressively as possible.

RUSH: So just to pick up on a thing that you said, and I’m not taunting you. I’m genuinely trying to pick your brain.

CALLER: Well, I’m sure that the biased mainstream media is trying to overturn every rock they can find to try and dig up any little dirt on Trump. And the so-called self-anointed Republican experts like Rove and Krauthammer, and I’ll throw Brit Hume in there, they’re just absolutely —

CALLER: — befuddled and heartbroken that we haven’t fallen head over heels for Bush, who is a weak, losing candidate. Hillary would mop the floor with him, I think she’d have a good chance. And I certainly hope that mother Hillary don’t get in there —

RUSH: I mean, right there, it all is. 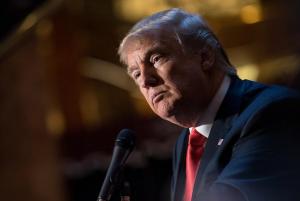 CALLER: I’m all in for Trump.

RUSH: I mean, for those of you trying to figure out what’s going on here Richard just pretty much bottled it for you. Here’s what I pick up from what Richard said. He has professed his unwavering support for Donald Trump. So I asked him is there anything that could cause that support to wane, vanish, or whatever. And you know what he basically said? No, because I’m not gonna believe any of it. If something comes along bad about Trump, I know it’s gonna be made up by these guys in Washington. So even if, if there is some magic revelation about Trump, his supporters aren’t gonna buy it. And I’m telling you, these people waiting for Trump, Carson, whoever to fade away are not understanding this. He’s in construction. He’s soldered.

RUSH: That’s why I say Trump is media proof. The media, well, they made him in some ways, but not politically, and therefore politically the media is not gonna be able to destroy Trump. And the same thing with Ben Carson. They are both where they are despite the media.