RUSH: Here is Trump talking about Rubio and Jeb this morning in Concord, New Hampshire.

TRUMP: Rubio is surging in New Hampshire. I don’t think so, folks. When you find out the truth about Rubio, you’ll check his credit cards from Florida, and you’re gonna find out, how does he feel about illegal immigration? And I will tell you, he’s totally — now, he’s since changed his mind a little bit. He’s still weak on it, but he changed his mind. There’s no way that plays in large parts of this country, especially in New Hampshire.

RUSH: And after that he took Jeb Bush apart. And I have that coming up after the break. There’s not enough time to squeeze that one in before the next obscene profit break here at the EIB Network.

RUSH: Everybody’s laughing here on the other side of the glass. It’s uncontrollable laughter on the other side of the glass. This is almost unfair. You’ve got a guy trying to be humble. You’ve got a guy from a family dynasty. I know about family dynasties, and I know what’s drilled into them. If they’re not the Kennedys, one of the things drilled into them: You will not tarnish the family name. You will at all times be humble. You will never, ever refer publicly or even think of us as a dynasty. You will always, always show other people respect. You shall always, always downplay your station in life.

That’s all Jeb’s doing here. He is just, “Hey, you know, I’m just like you, I’m not the best at this, I’m not the best at that, but I love my country and I want to fix it.” And the consultants advice is, “Look, Jeb, go out and admit that you’re just like everybody else and that you want to fix the country. You love it as much as they do.” I know exactly that’s what he’s trying to do. It’s the mark of a good character. It’s the mark of fine character, actually.

But in the political campaign, if it weren’t Trump saying this, do you think any of these other Republicans would say the things about Jeb that Trump is saying? I mean, Jeb’s out saying these things in one way or another. “Look, I’m not an entertainer. And look, I don’t particularly stand out as a debater.” I’m telling you, that’s breeding and the way he’s been raised. It’s an attempt to be humble. I know that. Don’t doubt me. 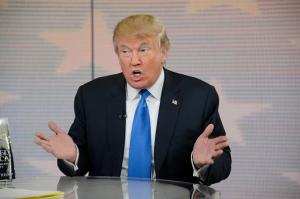 But you can take it too far. You know, if you start admitting or acknowledging shortcomings when you’re running for the most powerful office in the land, it may not be what people are looking for. People want a president to be better than they are. You really shouldn’t say anything self-deprecating unless you’re making a joke about yourself. And the only reason you self-deprecate in that sense is ’cause you have to be able to show you can laugh at yourself. But when you’ve got somebody with a killer instinct like Trump out there that’s gonna take what you say and throw it up against the wall and stack it up against common sense, “Jeb, why are you running then, if you’re no good at anything, if you’re admitting that you can’t do this and you can’t do, then why are you running?”

(interruption) What’s the question? (interruption) What, see okay, here we go. Another question. Here it comes again. Do you think Trump went too far in his attack on Rubio and his credit card debt? “Because Rush, look at all the people who are maxed out on their credit cards? Is Trump making fun of them? Is Trump saying that they wouldn’t be qualified? Has Trump gone too far?” Well, I don’t know how you want to judge whether he’s gone too far. Has Trump peaked and the Carson lead legitimate? Is Trump leveling or is he fading away?

Okay, but he’s leveling off. Do you think that’s why? I mean, the McCain stuff didn’t stick. I mean, he went after Carly Fiorina’s face, that didn’t stick. Not that we know. Well, he did, didn’t he? He apologized for it, and he told her he thought she was beautiful in the debate, and they didn’t accept that, but… (interruption) So you think he’s going too far with Rubio’s credit card debt? I don’t think so, no, but even if he is, he circled right back around and got to Rubio on immigration. And I guarantee you, if Trump sticks to his immigration stance and doesn’t — the only mistake I think Trump could make, well, not “the only,” but a big mistake I think Trump could make is if he reaches the point where he just assumes everybody knows his position on immigration and stops talking about it and moves on to other things. He’s got to constantly talk about it, ’cause when you stop talking about it, you run the risk of making people think you’ve stopped caring about it. But in Trump’s mind, he’s saying, I don’t want to bore people by saying the same thing over and over. He’s even referenced that.

You know, he goes out and he does these personal appearances, he says, “You never know what you’re gonna get with me ’cause I don’t have a stump speech. I don’t tell you the same thing over and over.” But that’s something he’s got to say over and over because that immigration stance of his is why he’s there. He can’t assume that people are gonna always accept it and understand it. He hasn’t done this. I’m just saying in the future, if he lets time goes by without saying it, he runs the risk of maybe some people thinking he doesn’t care about it anymore or what have you. So if he’s gonna rip Rubio on his credit card debt, he turned around and in the same statement pounded Rubio for his Gang of Eight stance, and he’s gonna get him on Rubio’s big donor on this. I would have to say, Mr. Snerdley, no, because none of those attacks on anybody else you can say have hurt Trump. (interruption) Why, do you have a lot of credit card debt and you’re offended? Is that it? (Laughing) I’m just kidding.

Well, you may think it’s an odd attack, but in Trump’s world, okay, here’s a guy running for president to control the budget and reduce the national debt and the deficit, but over here, in his real life, is this credit card thing. (interruption) I know, right? Well, people have come back at Trump. He made this statement that he started small. He had a million-dollar loan from his dad, and he had to prove — he’s been hit on that. I don’t know from Rubio, but media people have tried to say that this shows how out of touch Trump is. (interruption) Yeah, it’s like everybody’s dad has a million bucks to give ’em and it’s a big test in life and Trump passed his. No, they’ve tried all that. I think it’s risky to say that one of these individual things that he gets into is gonna take him out. Time will tell. Don’t need to bother predicting this stuff because it is or isn’t gonna happen, and it’s not gonna take that long to find out.

Two more here, because yesterday Trump had his press conference to announce the sale of his new book, and I mentioned that he had the media in the palm of his hand and I pointed out that he called on a reporterette from CNN named Sara, just praised her to the hilt, and I said the media, whether they admit it or not, they loved this. They loved Trump calling them out and liking them. They might write tough things later to make it look like it doesn’t effect them or anything, but they still like being called out. But he ripped her today. (laughing) He was praising her yesterday, rips her today. Let’s listen to yesterday. This is at Trump Tower, launching his new book, “Crippled America: How to Make America Great Again.” Sara Murray is the CNN political reporterette, and this is what Trump said. 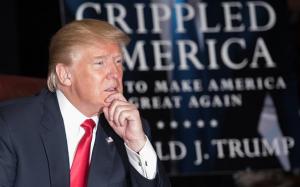 RUSH: They’re laughing on the other side of the glass. They’re laughing. Who does that? Can you hear George W. Bush, Jeb Bush, can you hear Christie, John Kasich? But that was yesterday. Today on CNN’s New Day, the host Chris Cuomo interviewing Trump, talking about his press conference yesterday.

TRUMP: You had me followed by Sara Murray, and she doesn’t know what she’s doing.

TRUMP: — and she doesn’t report what I say, nor does she report the —

CUOMO: Mr. Trump, you have to stop insulting people who do their job.

TRUMP: — energy, to use another good word —

TRUMP: — nor does she report the energy in the room.

TRUMP: She stands there like there’s 12 people in the room.

CUOMO: You were nice to her yesterday when you saw her at your book signing, but now you use this tactic of attacking her. 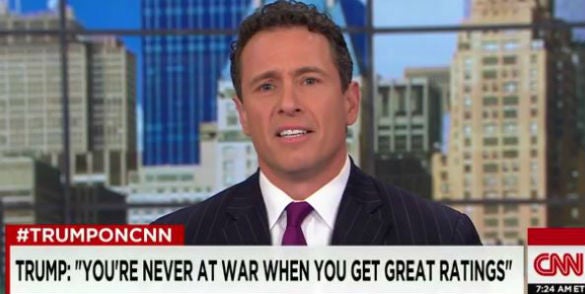 TRUMP: If you watched her, you’d think there were twelve people.

CUOMO: People know how many people were there. You tell everybody.

TRUMP: Excuse me. It stretched all the way down to Madison Avenue from the door, three and four abreast.

CUOMO: Have a good case that the media is mean to you.

TRUMP: The place was packed, and she gives us —

CUOMO: I just don’t think you have a good case.

CUOMO: You get the most attention.

TRUMP: Now, I don’t know if that’s because she’s incompetent or she doesn’t like me, or maybe she’s given instructions from up above. 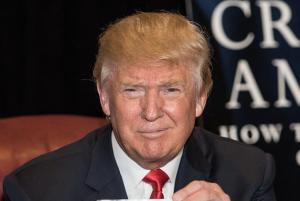 RUSH: (laughing) I love this! (laughing) I just… (laughing) “Maybe she’s been given instructions…” (laughing) So from one day to the next. Now, here, a couple observation. In the first place, Chris Cuomo has got to learn when Trump is talking, get out. You’re not gonna score any points in a debate by shouting Trump down. You’re just gonna tick off your audience who wants to hear what he’s saying. You gotta get past it, Chris. You gotta get past the fact that people would prefer to watch him than you, and when he’s talking, don’t interrupt him.

You’re just gonna irritate people. They’re watching CNN when Trump’s on to hear Trump. That’s a little professional advice. I’m just trying to be a nice guy here, help a fellow broadcaster get it right. Now, what Trump was saying is he called on Sara Murray or praised her, and apparently the report she did on his deal yesterday did not satisfy because she didn’t show all the long lines of people stretched down to Madison Avenue waiting to get into Trump Tower; she didn’t report the energy in the room.

She was reporting like there was only 12 people there. And Cuomo said, “But you were nice to her yesterday,” and Trump said, “I was nice to her ’til I saw her report the same night. She didn’t even show the lines of people.” And Cuomo can’t believe he’s that petty. “What do you mean, she didn’t show the lines? People know how many people were there. You tell everybody.” Trump said (laughing), “Excuse me. It stretched all the way down to Madison Avenue, three and four abreast, the place is packed, and she gives a very inaccurate story. I don’t know if she’s incompetent or she was given instructions from up above.” (laughing)