KARL: New poll out this morning. Four percent! I mean, did you ever think you’d be —

KARL: Is there any scenario that you would drop out of this race before Iowa?

RUSH: “No way. No how.” Jonathan Karl said, “Well, you recently hired a media consultant who’s gonna coach you on interviews and the debates. What is the consultant telling you?”

KARL: You need a consultant to tell you that?

JEB: Probably not. My problem in the debates: I have to untrain myself to answer questions that are asked. You have to pivot towards what you want to say, and, um, learn to interrupt in a way that doesn’t sound like you’re, um, just oppressively rude.

RUSH: I’m sorry, folks. It sounds to me… You know, Jeb Bush, strip away all this noise. Jeb Bush is a decent, nice guy. And it sounds to me like he really resents what he thinks you have to do. He is basically saying, “Yeah, they gotta teach me how to fool people, how to deceive people. You can’t answer the question that they ask you. You gotta take the opportunity of the question. You gotta say what you want to say. You gotta get your message out. You can’t allow yourself to be held prisoner to them.”

But he wants to be polite. 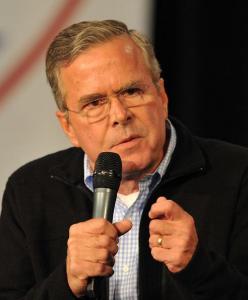 If they ask him a question about the Australian Rabid Bat, then he’s gonna answer a question about the Australian Rabid Bat, and he thinks he ought to get credit for doing that, for being honest. But this little reference here, “He’s telling me to be me, own what I believe,” and Karl says, “You need a consultant to tell you that?” Bush says, “Yeah, it’s amazing, huh?” That tells me that he may even resent the efforts they’re making, the consultants, to try to, quote/unquote, “fix it.” But it’s all speculation. I’m not there; I don’t know. I’m just telling you the way it seems to me from distance here.

RUSH: You know, folks, it just my little opinion here, but I think Jeb Bush’s biggest problem is gonna be a tough one to correct, and that is when he first said his objective is to win the nomination by sidetracking the base, to win the nomination by losing the primaries. I don’t know. Can a consultant teach somebody to be a conservative? I don’t know if there is such a person.