This Crap Has to Stop! Another Coordinated Drive-By Hit on a Republican

RUSH: This is not appearing in a vacuum today. Grab audio sound bite number three. This is a montage just this morning from ABC, CBS, NBC, and their attempt here to undermine Ben Carson, his character, his personality, and the assertions he’s made in his book.

TOM LLAMAS: New accusations claiming he made up part of his compelling life story!

JAN CRAWFORD: He is taking hits about whether he’s made up part of his life story!

AMY ROBACH: Carson acknowledges using fictitious names in the stories he told about his past.

PETER ALEXANDER: Meanwhile, Carson’s coming under new scrutiny for views of history, defending these past comments on the pyramids of Egypt.

DON CHAMPION: He still believes what he said in this 1998 speech that the pyramids were built to house grains.

JAN CRAWFORD: His 1998 remarks that the Egyptian pyramids were built by Joseph to store grain.

PETER ALEXANDER: Carson defended his lack of political experience, claiming every signer of the Declaration of Independence had no elected office experience. Not true!

PETER ALEXANDER : Launching a radio ad complete with a rap.

RUSH: Carson fired back calling this “a garbage smear campaign.” This is last night on The Kelly File. Megyn Kelly said, “I know you’ve said this feels like a witch hunt what’s happening over at CNN but let me ask you flat-out whether you stand by the claim as a young man as a 14-year-old boy that you attempted to stab another boy and attacked your mother with a hammer?”

CARSON: Those claims are absolutely true. I never use the true names of people in books, you know, to protect the innocent. That’s something that people have done for decades, for centuries. The person that I tried to stab, you know, I talked to today, said they would want to be revealed. They were not anxious to be revealed. And it was a close relative of mine, and I didn’t want to put their lives under the spotlight. This something that I’ve decided to do. None of those people decided that they wanted to do this, and the media is ruthless. So I would say to the people of America, “Do you think I’m a pathological liar like CNN does?”

RUSH: Next question: “Just to clarify, you’re revealing tonight that the person you attempted to stab — unsuccessfully — a story you’ve told many, many times was a close relative in your pineapple?” 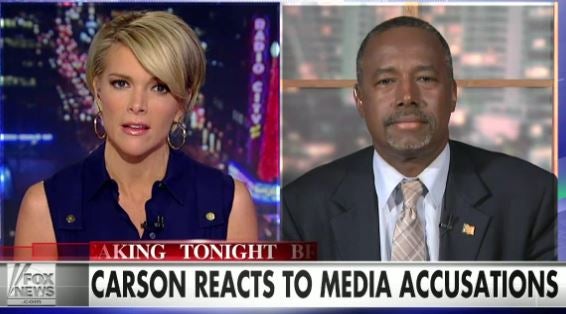 CARSON: It was a close relative in my family. You know, I really don’t want to get into the details of who that person was. But also, I want to point out how silly the CNN investigation is. When I would have flashes of temper, it would only be the people who were directly involved. And as far as the episode in junior high is concerned, none of those people that they talked to knew about what was going on at Hunter Junior High School. It’s a smear campaign. But, you know, I’m not gonna play that game with them. They can do it all they want. This is just garbage.

RUSH: And there’s another bite that I don’t have time to squeeze in now. But it’s Carson really reading the riot act to Alisyn Camerota at CNN this morning on New Day. So this Politico story about the fabrication, exaggeration of the whole West Point story is not happening in a vacuum, which adds even more evidence to my charge that what we have here is a coordinated effort. And The Politico story is clearly attempting to convince people that Carson has lied about much, much more than he has ever asserted or even exaggerated.

RUSH: Let me ask you a question, folks. Does any of this with Ben Carson amount to anything at all like Bill and Hillary and their abuse of their library foundation and their personal enrichment? Multimillionaires out selling influence on the come to foreign governments? Hillary’s involvement in the Keystone pipeline deal and Bill’s as well, where they are enriched from the decision? Does anything that Carson’s done get anywhere near that kind of corruption on the Clinton side?

RUSH: Mr. Snerdley, was it…? I’m trying to think back now. Was it The Politico…? And we could look this up. I just had the thought. I didn’t have a chance. I didn’t have the thought during the break, just now. Was The Politico the news organization tried to take out Herman Cain? Were they the first? Well, something tells me that Politico was at the top of the media food chain on the Cain thing, and here they are now running this story filled with exaggeration and innuendo itself on Ben Carson. But more importantly, remember who it is that the Republican establishment leaks to.

Is it not The Politico where we all learn what the Republican establishment thinks about things? Whenever there’s data, dirt, what have you, that they want people to know, it always shows up in Politico. It’s almost like The Politico is the official leak machine for the Republican establishment. (interruption) Yeah, okay, I was right. It was Politico that ran the exclusive on Herman Cain and all the affairs he supposedly had. It was Politico that led that story. Now, here’s John Kerry. Yeah, I don’t need it, but there it is.

“Exclusive: Two Women Accused Cain of Inappropriate Behavior — During Herman Cain’s tenure as the head of the National Restaurant Association in 1990s, at least two…” So The Politico has now two African-American scalps. The Politico has taken out two black Republicans now. They have taken out Herman Cain and they’re trying to take out Ben Carson today. And they always hated Westmoreland. They always hated Westmoreland. They hated him, too.

But I think, far as Ben Carson’s concerned, if you’re a young 19-year-old, or however young he was, and you’re the top ROTC graduate in your town, and Westmoreland starts plugging West Point to you — and as part of the conversation mentions how you get all your costs covered — a young kid like Carson coming from the ghetto might think, “Wow, they’re offering me a scholarship!” He might not have known how West Point operates. I don’t know. I don’t know if it’s interesting or not.

My point, folks, is we’ve got The Politico, and we’ve got CNN and the two of them are trying to take Ben Carson out. Who cares what CNN thinks and who cares what The Politico thinks? This crap has to stop. It won’t stop, it won’t stop, and we can’t ignore it and not talk about it when it happens, when the allegation is made. This is actually what I mean by way of what we do every day when we get up here. We’re minding our own business… Like I said, I was getting ready to have this run-of-the-mill, normal, everyday Friday.

The left is responsible for social issues being in the news because they are the ones launching attacks on the culture. They are the ones launching attacks on how we’ve always defined morality and civility. They’re trying to throw it overboard. They’re trying to upend it. Somebody’s gotta stand up and defend these things and that’s all I do, and we go in and we end up here being accused of going on the attack or bringing up the social issues.

That is exactly how it works. Now, let’s go back to the audio sound bites. Quickly, Ben Carson was on CNN today talking to Alisyn Camerota. She said, “You say that when you were 14 you almost killed your friend Bob with a camping knife. You tried to stab him in the stomach for changing the radio station. As you know, CNN’s been trying to find people who were involved in these incidents or witnessed them, and they’ve tried to find Jerry.”

CARSON: You go and talk to people primarily who knew me in high school, who don’t know anything about, for instance —

CARSON: — the lock situation that occurred at Wilson Junior High School. I — I don’t understand how talking —

RUSH: Camerota said, “Look, I know you call this tactics, but in politics, it’s called ‘vetting.’ And that’s all we’re doing, Mr. Carson. We’re vetting you.”

CAMEROTA: Well, yes! As a matter of fact (stammering) —

CARSON: No, you did not. Give me a break.

CAMEROTA: Don’t you remember that there was a whole question — 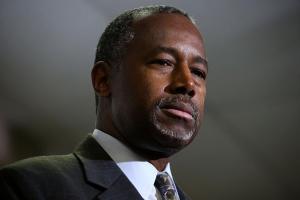 CAMEROTA: — about his girlfriend and that people went back to try to find the president’s girlfriend, and it turned out that she may have been a composite character, and that was revealed and the president had to talk about that!

RUSH: And then Camerota said, “Okay, look, it sounds like you don’t like some questions within that there’s some questions that you think are out of bounds, questions about your past.”

CARSON: I want you to ask Hillary Clinton the same questions you asked me. Will you do that? Will you promise that you’re gonna do that?

CAMEROTA: Yes of course! Of course we ask Hillary Clinton questions! All the candidates.

CARSON: You ask questions about veracity of what she’s done? I want you to go back and ask her some real questions about what happened at Benghazi. Will you ask her when did the time arrive in our nation when we said, “It’s too dangerous to go and rescue our people,” when in fact you had those two Navy SEALs on top of that compound shooting those machine guns, allowing their colleagues to escape. But I’m sure they were saying, “If we can just hold out, help is on the way. But help was not on the way.” Ask her why help was not on the way. Please ask her those questions. I would appreciate it.

RUSH: It doesn’t sound like he’s all that mild-mannered there to me. That sounds like almost an on-fire Ben Carson.