College Football Will Never Be the Same

RUSH: Here’s Rachel Nichols, by the way. She was also on Anderson Cooper last night, and he said to her, “There are obviously a lot of factors involved here, but it is undeniable the power that this team has. I mean, they bring in tens of millions of dollars to this school every year.” 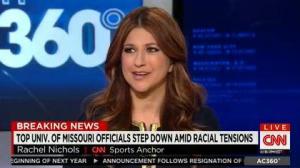 RUSH: Right, and they’re so excited. Rachel and her buds in the media are all excited. They’ve been hoping and praying to be able to get these athletes involved in the political process because they think they’re unstoppable. And they think, because of what she just said, more people watch football than go to church, if you worship an athlete and he comes out and says “Vote Obama,” that’s probably worth 10 million votes, so many people idolize athletes.

Up to now athletes have been reluctant to do that because kids of both parties happen to buy T-shirts or tennis shoes or sneakers or what have you, and athletes have been reluctant to alienate half of the buying public. But that hasn’t stopped the Drive-By sports media from trying to lure them in and get them involved in the political process, ’cause of course the Drive-By sports media is as liberal, if not more so, than the standard everyday Drive-By Media.

One last thing. Michael Sam, in a story found at NewsBusters yesterday said that he had personally experienced no racism at all when he played football for Mizzou. Claims to have personally experienced no racism whatsoever. “Michael Sam has a lot to learn about being a radical liberal activist. After University of Missouri President Tim Wolfe resigned on Monday,” Sam said (paraphrasing), “I didn’t experience any racial issues. It didn’t happen. Everything was fine. They gave me awards” and the left-wing activists could not let this stand. I mean, here’s this openly gay, award-winning linebacker for Mizzou, African-American, says he didn’t experience any racism, and that’s the whole reason all this hubbub is going on.

So they got hold of Michael Sam. They took him somewhere and they got his mind right and the next story that came out on Breitbart was: “Michael Sam, the openly gay football player who competed at the University of Missouri from 2009-13, tweeted his delight after Mizzou president Tim Wolfe announced his resignation Monday morning.”

Michael Sam said: “If Mizzou is truly a family, then WE all must stand by #ConcernedStudent1950!!!”

“Today was just one more step forward, that itÂ’s true we can still come together in any circumstance.”

So yesterday, hey, you know what, I didn’t experience any racism. A few short hours later, they’d gotten his mind right, he became victim number one, as he should have always portrayed himself to be and was off on the right path.

RUSH: By the way, one more thing about Michael Sam. You know what he did? He bombed out in the NFL. Then he went to the CFL and it didn’t work out there, so he left. You know where he went? He went back to Mizzou. He went back to this racist, sexist, homophobic institution. He went backward. Nobody feels safe. He went back where there’s anger and hatred all over the place. That’s where he went back. He wanted to finish his studies. He wanted go to grad school or something, wanted to try to get a degree of some kind. Why would he return to such a racist, filthy, unsafe, dangerous place when he could have gone anywhere else?