Halperin and Kurtz Admit the Media Is Ben Carson’s Opposition

RUSH: The Ben Carson story. “In an interview with BuzzFeed News on Monday, Curtis Bakal, an editorial assistant at the satirical Yale Record who says he helped write the fake test,” that the media says Carson made up. He’s actually taking credit for writing the fake test, “said he was ‘99% certain the way Carson remembers it is correct.’ ‘When I read about the story in the Wall Street Journal, I immediately said, to my wife and friend, “That was the prank we played at the Record! And Ben Carson was in the class.”‘”

That’s incredible! “We did a mock parody of the Yale Daily News during the exam period in January 1970, and in this parody we had a box that said: ‘So-and-so section of the exam has been lost in a fire. Professor so-and-so is going to give a makeup exam.’ We got a room to do the test in and one of us from the Record impersonated a proctor to give the test.” Carson fell for it, he wrote about it, the fake test, the hoax. The Wall Street Journal, “We can’t find any evidence this happened.” Well, the guy who made up the fake test has come forward, “Yeah, yeah, we did it. We didn’t know it ensnared Carson. This is great. This is cool.” They’re a bunch of satirists. I can relate to this. I did all kinds of pranks like this. I love reading about successful stuff like this. But the effort here to make it look like Carson made it all up.

TheHill.com: “Carson Now Most Favorable GOP Candidate — Ben Carson is the most popular 2016 Republican White House hopeful, according to a new poll. Over seven in 10 Republicans in a Washington Post-ABC News survey view the retired neurosurgeon positively. Carson earns a 71 percent favorability rating, pollsters found, with 39 percent of that total ‘strongly’ favorable toward him. CarsonÂ’s favorability rating is up from 68 percent in a similar poll six weeks ago.”

Thomas Sowell has weighed in on the Carson flap, and we’ve got some media audio sound bites coming up.

RUSH: Here’s Mark Halperin last night. Bloomberg TV, his TV show, All Due Respect that he cohosts with John Heilemann. They are discussing Carson, the presidential campaign and The Politico story that we exposed as an assassination attempt last Friday.

HALPERIN: Is Ben Carson in better shape or worse shape today than he was headed into the weekend when this story started to explode?

HEILEMANN: He’s in better shape. Most of these stories have burnt out. The base has rallied around him. He’s raising a ton of money. But on none of these stories has he been caught lying, not one of them. Did he shield people at his high school? What were the circumstances of a hoax involving a psychology course? All that stuff I just think is meaningless. And whether — why a vegetarian was eating at Popeye’s. This is not the stuff — this is not dodging the draft or Gennifer Flowers.

RUSH: Dodging the draft or Gennifer Flowers. Are you guys kidding me? You shielded Clinton from all that. What do you mean? What is this, none of these stories was he caught lying, as though the media gave it its best shot but Carson overcame. What is the point here? You guys are admitting that the media is an opposition force, and in this instance Carson overcame it. You’re admitting it. The media’s on your side. I think it’s a hell of an admission. Here’s Howard Kurtz on Fox News. This is The Kelly File, Megyn Kelly last night. She said, “What do you think are the stakes for Ben Carson at the debate tonight?”

KURTZ: This debate comes at an opportune time for Ben Carson who has been whipping the media’s butt on these questions about his biography. Fair to raise the questions, but too much overreaching within inflammatory headlines and places where you publish where you just ain’t got it.

RUSH: What does it mean, kicking the media’s butt? You know, stop and think of what these people are saying here for a second, folks. Ben Carson’s kicking the media’s butt. It’s an admission that the media is an opposition force. So it isn’t media. It’s the Democrat Party, Howard, come on. Can we just be straightforward? You guys call yourselves the media as though what you do is gather the news that nobody knows and then you report it. It’s not at all what’s going on here. You say that these were fair questions to raise? You accuse him of lying! There weren’t any questions. There were accusations. Fair? It’s like Mary Mapes trying to defend this stupid movie that they made of Dan Rather and his bogus forgery story. “They can’t stop us from asking the question, they can’t.” So that’s how they camouflage what they do. “We’re not alleging anything. We’re asking the question. Did Bush skip out on his National Guard –” No, there’s no evidence that he did. You’re raising the question because you want people to think he did. You’re lying about it so that you can shape public opinion. 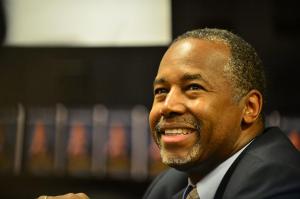 CRAWFORD: A CNN report last week found no evidence the incident occurred. But in a 1997 interview with Parade magazine Carson’s mother said, “Oh, that really happened.” Carson has provided corroboration for part of his story. West Point recruiting material that mentions scholarships, and PolitiFact rates his claim “mostly true.” The Wall Street Journal is questioning one of Carson’s anecdotes about a time he said he was pranked at Yale, but last night, BuzzFeed backed Carson’s account. It found a student there at the time who said it happened.

So Jan Crawford on CBS goes on CBS, admits three instances where the media was wrong and Carson was right. Carson wasn’t right. There wasn’t a contest. Carson wrote his autobiography. You people alleged he lied about it. You made it up. Carson’s not a factor here. This is all about you. Why isn’t the headline all over the place, “Politico Lied,” and then every other media outlet that picked up The Politico story and ran with it? I had a list of headlines I read to you. They all promulgated the same thing: Carson lied. Carson made it up. He never went to West Point.