Some Incredible News About Refugees, Borders and Immigration

RUSH: Speaking of Chris Wallace and Fox News Sunday, the most recent episode — actually this was on Fox News Channel’s Fox & Friends Weekend on Sunday morning. Tucker Carlson spoke with Chris Wallace, the host of Fox News Sunday, about the upcoming program. But in fact, Wallace talked about the previous Sunday’s episode on which I appeared. Tucker Carlson said, “What percentage of Syrian refugees would move here if they could?”

WALLACE: As opposed to being in refugee camps in Jordan? 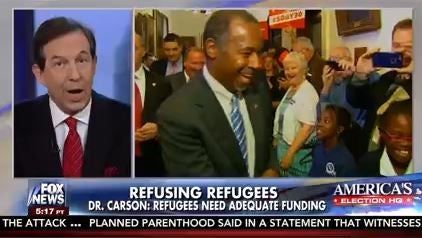 WALLACE: I think about 100% would like to be in this country. Let’s face it, this is primarily about Ben Carson who’s been under real fire in the wake of the attack on Paris and a new focus on foreign policy, national security, trying to show that he has some foreign relations chops, that he’s fit to be commander-in-chief. Last week on Fox News Sunday, Rush Limbaugh — who’s very praiseworthy about Ben Carson — said he doubted that he was ready to be commander-in-chief, and this is clearly Ben Carson trying to show that he is ready.

RUSH: Yes. So synthesize that. I did say that on Fox News Sunday, a couple Sundays ago, and what Wallace is saying here is my saying that is what motivated or caused Ben Carson to start taking his foreign policy trip here to Syria and talk to the refugees and so forth, which he did. I don’t know whether Wallace is right about that. I’m not… That’s not the point. The point is, Ben Carson was on the Today show today. Matt Lauer interviewed him, and he talked about his trip, Carson’s trip to in the Middle East, and Matt Lauer said, “You said that you want to bar them from coming into this country. You’ve spoken to some of them face-to-face, these Syrian refugees. Do you have the same opinion of that group of people now or have you changed your policy at all?”

CARSON: You say that I say I want to bar them from coming to this country, so I don’t accept that premise. What I have said is that bringing them into this country does not solve the problem, and it exposes us to danger. ISIS has already said that if we bring tens of thousands of people here, they will infiltrate them with their people. I asked them specifically, “What would you like to happen?” Two questions: “What would you like to happen, and what can the United States do?” And the answers I got were pretty consistent. They would like to go back home to Syria, number one. And what can nations like the United States do? They want support the efforts of places like Jordan and other places that might offer them a safe place to inhabit until such time as they can return home. 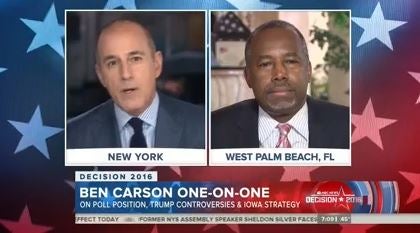 RUSH: So Carson goes and talks to these refugees and comes back and says what he learned is they don’t want to come here. They would prefer to be able to go back home. And until such time as they can go back home, Carson thinks neighboring countries ought to take them in. It makes far more sense for neighboring countries to take them in. They’re in close proximity, and if the circumstances in Syria improve, then they can go back home. Now, have you heard this anywhere else? I haven’t, either.

But I don’t think anybody but Carson’s actually gone and talked to them. You know, we’re hearing it from Obama, we hear it from the media, we hear from the Democrats, and it’s always compassion based. “Well, we simply we have to open our borders to refugees! We’ve always done it. I mean, that’s what our country is. That’s who we are; that’s what we’re about.” And the assumption is that anybody in the world would rather be here than in their home country, particularly a war torn area in the Middle East.

So Dr. Carson goes on and talks to ’em, and he says most of them have told him they don’t want to come here. They want to stay in their home country. They’d rather be able to go back home. Home is home, folks. I don’t care where you’re from, home is home. I don’t care where you go, you always look forward to getting back home. Well, there are exceptions to everything, but it’s pretty much standard human behavior. And it makes perfect sense to me. Regarding all of this, the border, some incredible news about borders and immigration from all over the place.

Let me give you an idea what I mean. The New York Times. The irony here, this is so rich. “New York Times Reports that Influx of Low-Skilled, Undocumented Immigrants Hurts Workers …. in,” dadelut dadelut dadelut, “Turkey.” (interruption) You saw it? “Many here in Eskisehir [a city in Turkey experiencing tough economic times] say that an influx of refugees from Syria and others without Turkish work papers is making the economy worse — even though Eskisehir is 400 miles from the Syrian border. ‘That’s a major problem,’ Mayor Byukersen said.

“‘The number of Syrian refugees is increasing by day and they are adding to our unemployment problem.'” Well, imagine that. And the New York Times, by golly, by gosh, acknowledges it in Turkey. I mean, it’s one of those, “Shazam! Who would believe this?” And so the New York Times is very sympathetic to Turkey and we must be very cognizant of the economic damage that these immigrants — or illegals, folks — could be doing to Turkey. The next story from the Wall Street Journal. And this is stunning, too, because the Wall Street Journal, you’d have to say, is part of open-borders coalition in this country.

You know, it’s a wonder the Regime doesn’t choke on all of its irony, and the open-borders lobbyists at the Wall Street Journal, they buried Turkey’s retort at the bottom of their long article. You know what Turkish officials said when Obama urged them to close their border? “Turkish officials pointed to Washington’s inability to seal off the US-Mexico border as an example of how difficult such operations can be. US officials chafe at the comparison. ‘If we were at war with Mexico, we’d close that border,’ a senior administration official said of Washington’s response.”

Wait a minute. So that’s it? We’re not sealing the border because the Regime doesn’t think that we are at war with Mexico, but if we were at war with Mexico we’d seal that border? What about the drug cartels? If you ask me, DEA operations look a lot like warfare. It seems to. But, anyway, the irony here is rich, and for the Wall Street Journal to be running the story is even better. So Turkey. The New York Times is worried that Turkey is having employment problems with this influx of illegal immigrants from Syria.

And now the American administration’s urging Turkey to seal their border to keep ISIS out, while at the same time we’re opening our borders to ISIS and whoever else wants to infiltrate the Syrian refugees (who, it turns out, do not want to be here), and that we’re not sealing off the southern border with Mexico, even though we’re telling everybody else around the world — particularly Turkey in this case — to seal their border. And then there’s this, folks. This is from Breitbart.

“The action-man (sic) mayor of Hungarian frontier town Asotthalom has invited ‘all active Europeans’ to visit the border fence his government created, so they can learn how to protect their own countries. Praising the remarkable success of the Hungarian border fence, which reduced daily illegal migrant incursions from some 10,000 a day to 30 in just the space of a week, Mayor Laszlo Toroczkai acknowledged the fence hadn’t actually solved the European migrant crisis. Instead, blocking Hungary off had just shifted the migratory stream westwards to Slovenia.” But at least it fixed for his country, his city. Shazam! Look at all these stories about what works. Got a border fence, and it’s working.

In a frontier town in Hungary where 10,000 illegal migrants a day were crossing the border, they build a fence and in a week, 10,000 becomes 30. And what do the migrants do? They just shift down the road to Slovenia. They don’t try to climb the fence because the fences work. So this is four stories in a row in the Drive-By Media, which totally destroy the administration’s position on illegal immigration and borders and fences. It’s amazing.

National Review Online Andy McCarthy back on November 30th. “In Europe, Muslim Refugees Recruited to Radical Islam.” It’s something he’s written about before, postulating it, theorizing it, now he’s documented that it’s happening.

“In my weekend column on the controversy involving refugees from Muslim-majority countries in the Middle East, I explained that even if our government had access to the background information necessary to vet them (it doesnÂ’t), we would still be inviting a national security catastrophe for two reasons: (1) we vet for the wrong thing (i.e., only for whether the immigrants have known connections to terrorist groups, not whether they are adherent to Islamic-supremacist ideology).”

We don’t ask them that, do you know that? We just ask them, “Do you have ties to terrorism?” Nope. “Cool, man, come on in.” We do not ask them what they think of ISIS. We do not ask them what they think of jihad. We don’t ask them if they’re tempted to do jihad. None of that. We just ask them if they’re a terrorist or if anybody in their family is terrorists or if they know any terrorists or if they Instagram with any terrorists. And if they say no, which of course what are they gonna say, they’re all gonna say “no.” And of course the main issue is not whether refugees are already terrorists, but whether they’re likely to become terrorists after they get here, and it’s now been learned and confirmed that Muslim refugees are recruited to radical Islam after they arrive in the United States.

And then this from back on November 27th, “More than 14,000 foreign nationals told to leave Sweden have gone underground. Police saying there is little they can do to enforce deportation orders ’cause they can’t find the 14,000. A total of 21,748 people have been given deportation orders by the Swedish migration agency at the end of October. It’s the largest number of deportations ever ordered. Of those, 14,140 are registered by police as departed or –” they’ve lost them. They don’t know where they are. They’ve gone underground in Sweden. They have disappeared. They can’t be found because they don’t want to be found.