RUSH: You people, regular listeners are well aware of the audio sound bite that we’ve been playing since 2008 periodically of Charlie Rose and Tom Brokaw on the Charlie Rose Show a couple days before the election in 2008 discussing amongst themselves how little they know about Barack Obama and yet urging everybody to support him and elect him even though they’re admitting to each other they don’t know a thing about him.

They don’t know who he is. They don’t know what he’s read. They don’t know who influences him, but he’d be better than McCain. Well, apparently Charlie has heard about this, because today — or actually it was last night on Bloomberg Television’s “With All Due Respect.” That’s John Heilemann and Mark Halperin. Charlie Rose was their guest, and they were talking about the presidential campaign, and Halperin says, “Here’s another attempt at a Charlie Rose-style question. Having just spent 45 minutes with Hillary Clinton, knowing her as you do, what do you wonder about her now, Charlie?” 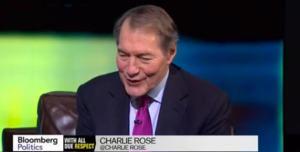 ROSE: I wonder — I once got criticized along with Tom Brokaw, my good friend, because we said we didn’t really know a lot about Barack Obama. My friend Rush Limbaugh jumped all over that for five years.

RUSH: Seven, Charlie. (laughing) It’s been seven years. But then he goes on to list all the things that he doesn’t know about Bill and Hillary, even though he’s known them for 30 years, and he says he doesn’t know her narrative for the race. Listen.

ROSE: Uhhh, I just — I think the thing I don’t know about her, uh, is, you know, she has moved to the left a little bit here, you know. I don’t — I’m not sure that I know — I think she is essentially and has been mostly a centrist politician most of her life, as has her husband. I don’t know where they differ. The thing I most wonder about is what his role would be as well.

ROSE: I don’t know what that narrative is. She may, but I don’t think I know yet. 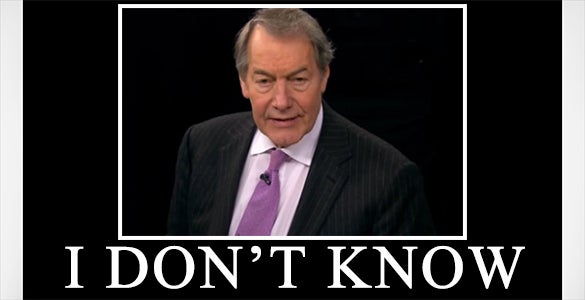 RUSH: This is just stunning to me! This guy has made a career out of saying “I don’t know.” It’s just the most amazing thing to me. (laughing) I couldn’t get away with this. He’s known ’em for 30 years. He’s voted for ’em every chance he’s got. He doesn’t know, after he acknowledges that I have had a little fun with him and Brokaw claiming they didn’t know anything about Obama, he goes and repeats it with Hillary. And then what he does know is wrong. She was a centrist most of her life? (laughing) She is Hillary Alinsky is who she is.

And this, in Charlie’s world, equals sophisticated brilliance. Folks, this is how you gain accreditation in this world. “I don’t know. I really don’t. I think that… but I don’t know. I’m just really not sure. I’ve looked long and hard and I’ve dug deep, I don’t know.” Man, you are so brilliant. Yes, I love Charlie. I’m having a little fun here with Charlie, but I’m telling you I marvel at this.

Here’s the first bite, Snerdley is demanding to hear audio sound bite number one again. So he’s asked the question here by Mark Halperin. “Having just spent 45 minutes with Hillary Clinton, knowing her as you do, what do you wonder about her now?” What a question. It’s the blind leading the blind. Anyway, here’s what Charlie said. 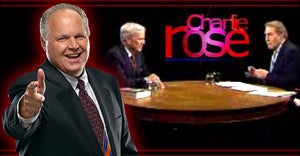 ROSE: I don’t know what Barack Obama’s worldview is.

ROSE: I don’t know how he really sees where China is.

BROKAW: We don’t know a lot about Barack Obama and the universe of his thinking about foreign policy.

ROSE: I don’t really know. And do we know anything about the people who are advising him?

ROSE: He is principally known through his autobiography and through very aspirational (sic) speeches.

BROKAW: Two of them! I don’t know what books he’s read.

ROSE: What do we know about the heroes of Barack Obama?

BROKAW: There’s a lot about him we don’t know.

RUSH: (laughing) I’m sorry, folks. You tune in to these shows to find things out and the people running these shows say they don’t know anything. “I don’t know what books he’s read. It’s an interesting question. I don’t know who’s inspired him outside of his aspirational speeches. It’s an interesting question. I really don’t know.” Well, what did Charlie say about San Bernardino? Well, we have that. That was this morning on CBS This Morning. It’s audio sound bite number four.

ROSE: There is nothing this morning to explain why a married couple carried out a deadly shooting rampage. Fourteen people were killed Wednesday, and another 17 injured. 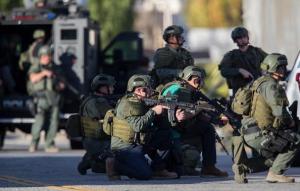 RUSH: I just don’t know why he did it. There’s just nothing this morning to explain why a married couple carried out a deadly shooting. That’s who they were, a married couple. I just don’t know. And then, move on now to sound bite number six. Later on CNN’s New Day, during a report about yesterday’s San Bernardino shooting, the cohost, Michaela Pereira reported this.

PEREIRA: Here’s the question on everybody’s mind. What would lead a young married couple with a baby to go on a shooting rampage?

RUSH: Okay, so Charlie Rose on CBS This Morning, Michaela Pereira on CNN this morning, apparently a memo went out to all of the early morning network shows, and the memo said the thing to say here is: “What would lead a young married couple to start shooting people?” So that was today’s gravitas. Somebody sent them out with the marching orders. Somebody told them that the narrative this morning was, what would make a married couple go on a shooting rampage?