RUSH: Now, this is an interesting little piece here. This from the American Spectator. Arnold Ahlert, A-h-l-e-r-t, used to write for the New York Post. Do you all remember when we first heard of the assault on the facility in San Bernardino, there were three shooters? Yeah, I remember that, too. And Arnold Ahlert’s piece here headlined: “Odd Man Out: What Happened to the Third Shooter?” His whole piece is premised on this whole thing stinks. The story we’re getting about all of this still doesn’t add up, to him. American Spectator, Arnold Ahlert. He starts it this way.

He says, “This is one American who does not have high expectations for our mainstream media. Yet, is it too much to expect a moderate level of curiosity about a critical part of a major story… even if it is not in line with the progressive agenda? Apparently so, as two nagging questions about the terrorist attack in San Bernardino remain unanswered. Worse, they remain unasked!

“First, what ever happened to the third shooter? Using several search parameters, one can find a substantial number of media reports on the day of the shooting indicating that police were searching for three suspects. In addition Sally Abdelmageed, an employee at Inland Medical Center where the attack occurred, insisted as much during an interview with CBS News. ‘I heard shots fired and it was from — you know — an automatic weapon,’ Abdelmageed stated, adding that it was all ‘very unusual. Why would we hear shots? As we looked out the window a second set of shots goes off [Â…] and we saw a man fall to the floor. Then we just looked and we saw three men dressed in all black, military attire, with vests on. They were holding assault rifles. As soon as they opened up the doors to building three [Â…] one of them [Â…] started to shoot into the room.'”

And I do remember the first reports, there were three shooters and they were all decked out in camouflage gear, all black, it was a professional hit. In fact, the original stories on this were how unlike terrorism this attack appeared. The three were professionally attired, they had vests on, they didn’t want to die. They came in, they shot the place up, and then they got out, and they escaped. And for a short period of time after the event, nobody knew where they were. And so the original stories were this could not have been terrorism. This could not have been Islamic extremism because they claim victory, they die for the 72 virgins, they martyr themselves, they die in the event. These people didn’t want to die. They didn’t want to get caught. They just ran around, they got away, very professional. That was the first substantive report that I remember getting, including with the third shooter.

Now: “In describing the assailants Abdelmageed admitted she ‘couldn’t see a face, he had a black hat on … black cargo pants, the kind with the big puffy pockets on the side … long sleeve shirt … gloves … huge assault rifle … six magazines … I just saw three dressed exactly the same.’ The [CBS] reporter then asked Abdelmageed again, ‘You are certain you saw three men?’ ‘Yes,’ she insisted. ‘It looked like their skin color was white. They look like they were athletic build and they appeared to be tall.’

“A second witness, Juan Fernandez, corroborated Abdelmageed’s account, telling reporters he also saw ‘three white men in military fatigues’ who ‘took off’ in a ‘black Impala or SUV.’ Moreover, after the police killed Tashfeen Malik and Syed Rizwan Farook [“Climate Change”] in a shootout, the media were still reporting the ‘house-to-house’ search for a third suspect being conducted by police. Since then? Nothing.

“Certainly eyewitness accounts are notoriously unreliable, but isn’t that precisely the reason one might expect the media to clarify the discrepancies between their original reporting and the current status quo? As bad as that lack of closure is, the second question is far more troublesome: why did the FBI abandon their investigation of the townhouse rented by the terrorists and allow media access to it only two days after the shooting — and leave shredded documents behind?”

You know, this is a question I had when I saw the media being let in this place. It happened while the program was on. I saw it up there on one of the monitors, and I said, “What is this?” We were told the landlord let ’em in and the FBI had cleared the scene. After two days, you clear a crime scene, and we’re still hearing reports of the mother was deeply involved, and the mother had all kinds of terrorist stuff they’re finding in her house or the room where she was living or whatever.

I mean, the evidence is now being piled on. This was a family deeply involved in terrorism. It could not have been spontaneous workplace violence. This was totally premeditated, and it was well thought out, and there were all kinds of Muslim assistance in the community helping the San Bernardino Two. And against all this we find out the FBI cleared their house in two days, and the media goes trampling through there and destroying all the evidence that was left inside.

“Former NYPD Det. Harry Houck illuminates the insanity. ‘This apartment clearly is full of evidence,’ he explained. ‘I don’t see any fingerprint dust on the walls where they went in there and checked for fingerprints for other people that might have been connected to these two. You’ve got documents laying all over the place — you’ve got shredded documents that need to be taken out of there and put together to see what was shredded,’ Houck added. 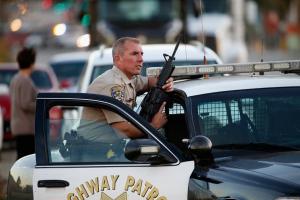 “‘You have passports, driver’s licenses — now you have thousands of fingerprints all over inside this crime scene.'” It doesn’t make any sense. It doesn’t. I never understood that, why they cleared this so fast and let the media in there. I mean, the media? You let them in? The media is a herd of cows you’re letting in there, and they’ll trample whatever they run across. They don’t care about preserving anything. It’s first come, first served. Get to whatever they can before anybody else does and get a picture of it.

RUSH: Look at this list of headlines here on Drudge. I just checked the Drudge page during the break, because this story here from Arnold Ahlert… This has really got me going. “What Happened to the Third Shooter?” And then the New York detective, the former NYPD detective, Harry Houk openly wondering why in the world the FBI cleared the crime scene out there — the loving couple’s home — for the media to go trampling through two days after. Why didn’t they preserve that crime scene? The detective said even when the media is going through there, he didn’t see any evidence of fingerprint dust.

I mean, he saw shredded documents laying around and so forth. And Mr. Ahlert concludes his piece, “Something stinks here. Given the track record of Islamic terror denialism embraced by the [Regime] — along with innumerable examples of media malfeasance protecting that approach — the unmistakable odor of a coverup, or an orchestrated disinformation campaign, hangs heavy in the air.” Arnold Ahlert thinks that we are being really led down the wrong path, and I’ll tell you, that night when we’re all watching the media and everybody knows the name Syed Farook, and the media won’t say it ’cause it’s a “delicate situation?”

This was not, you know, an oddball terrorist couple. This was a cell. They had a lot of people gathering ammunition, working on planning, driving other people around. It’s not what we’ve been told it is. It was not a couple “radicalized” who met on a dating site. The active theory now is that it was an arranged marriage by terrormasters and that they had, after the arranged marriage, a mission, and the San Bernardino attack was the mission — and it may have been more, we don’t know. Third shooter? Who, what, when, where, why? Is there one? Was there one

Two witnesses said they saw one. The media reported third shooter. But nobody’s had any interest in tracking a shooter down.