My Take on Apple’s System Upgrades

RUSH: I got an e-mail during the break. I check e-mails during the break. That’s why I give the e-mail address out, ’cause I check ’em. But, folks, it’s impossible. I had to get a spam filter ’cause we get, I don’t know, something like 5,000 spam e-mails just during the program, and weeding through all those, just tons and tons e-mails, it’s impossible to read ’em all. So I subject line scan, and who knows what causes me to stop on one and open it and read it, but I do it when I have time during the breaks. And I just read one.

“You know, Rush,” — I’m paraphrasing. I didn’t print it out. I don’t have it right in front of me. I’m just giving you the juxtaposition of it, the thrust of it. “There’s nothing it seems like you don’t know. Is all you do study? Do you do anything else? To know what you know and to be as up to speed on things as you are, I can’t imagine you have time to do anything else. Is all you do is read and study?”

I upgraded three watches starting at 6:30 last night, and then I found out that in iOS 9.2, if you have AT&T, if your carrier is AT&T, they just turned on a fascinating feature called NumberSync. It’s part of Wi-Fi calling. You have to have iOS 9.2, you have to live in an area where AT&T offers Wi-Fi calling. What that is, if you live in an area with a very weak cell signal, your call will be answered or made on your Wi-Fi network with exceptional quality, something like FaceTime audio or VoIP. And they added this NumberSync to it, and NumberSync is very simple. What NumberSync is, it allows Wi-Fi calls to be made and received on your Mac, on your iPads, on your iPod Touches with your phone turned off.

Your phone could be lost. Your phone could be in another room. It’s not tethered to the phone. It’s brand-new. So I read this, I said, “Why, this is cool.” So I went to the settings for the phone to turn on this feature, and it wasn’t listed. It’s the Wi-Fi calling section of the phone settings, but it wasn’t there. So I read further and I found out the blogs were all saying that NumberSync wasn’t gonna be turned on ’til the first part of next year. But then I found other blogs saying, no, no, it’s active now, users are reporting. Well, I didn’t have it. So I said, “Well, what the heck? How can I find out how to activate this?”

While I’m doing that, I got an alert on my phone, it was an alert for a carrier settings update. Do you know what that is? That’s when your carrier, in this case mine’s AT&T, said, okay, there’s settings that we need to upgrade on your phone. You want to do it or not? Well, I always want to do it, any upgrade, hit install it, it took less than a second, and they put NumberSync on my phone yesterday, on my primary phone. So I then set about hooking that up. You can do it for five devices, so I did my laptop, two iPads and one of my desk Macs, five devices all set up to do this. And then I tested it, and it works. You can make a phone call with your telephone turned off on your Mac, your iPad — I don’t have an iPod Touch, but if I did, you could.

But I have a backup phone, AT&T, and it didn’t receive a carrier settings update alert, so I said, “Hmm. How can I trigger it for the second phone?” And I kept checking it all night long and the carrier settings alert for the second phone did not come in. So I said, “Maybe I can trigger it with iTunes.” So I plugged in to iTunes here this morning, my secondary AT&T phone, bammo, there it was. Soon as I plugged in there was an alert to upgrade and install the carrier settings upgrade, and I did it, and turned it on. They’re rolling it out. I think it’s gonna take them some time to do it, but my point in telling you this is that none of this is in the release notes for 9.2. If you don’t read the blogs or take time to study this stuff, you’ll never know this feature exists, unless you spend time in the AT&T blog, and I don’t know how many people do that.

So my point in telling you this, if you installed 9.2 yesterday and if you have an AT&T phone, keep a sharp eye for an alert. It’s not a banner alert. It’s an actual little badge on the home screen, wherever you are on the phone when it comes in, it says, “Carrier settings update.” And don’t let it scare you, just hit install it or “yes” or whatever, and then go to Settings, slash, phone, slash, Wi-Fi calling if it’s available in your area, and it should be. And then you’ll see it underneath that. But you have to have Wi-Fi calling in your area, and you have to have that turned on before NumberSync will work.

Now, all of this is kind of crazy ’cause I don’t use the phone. (laughing) But to me it’s a fascinating bit of tech. And this is not much to do with the Apple continuity and extensibility features. This is strictly an AT&T feature that you can actually use a Wi-Fi network that you’re on, on your Mac or your iPad to make a phone call or answer one on your primary phone number where the phone doesn’t even have to be on or in range or the phone could be lost, in fact, and this would work. So they found a way to get your cell signal over Wi-Fi, which increases, expands the quality of the call and all that. So I tested it, and it did work.

So, yeah, I’ve got all kinds of time to do stuff besides study. (interruption) See, you just got your carrier settings, see? Plugged it into iTunes and bam, there was your carrier setting alert and you installed it and I’ll show you after the program how to do it. Have you set up Wi-Fi calling? (interruption) All right, cool. There you go. It’s easy, it just takes some time. But one thing with Wi-Fi calling, you have to put in an address because if you dial 911 on a Wi-Fi call your location is not registered. So you people afraid of the NSA, this is right up your alley. They can’t tell where you’re calling from if you make a Wi-Fi call. So if you got an emergency, dial 911 using Wi-Fi, they don’t know where you are. That’s why you have to register an address, strictly for emergency services purposes. So you put in your home address or wherever you are most of the day. It can’t be a P.O. box. Gotta give an actual street address and then you’re up and running.

Do you have your iPad with you, Brian? Well, when you go home tonight, just turn your iPad on and put your phone next to it and it won’t be long where you’ll get an alert on the iPad with a four digit code to authorize. And if that doesn’t happen, go the to the FaceTime app, that’s how you do it on your Mac. 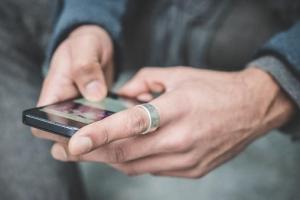 It all runs through FaceTime, so go to FaceTime on your Mac or on your iPad and that will trigger the way you activate that device from your phone. Okay. So, yeah, I got all kinds of time to do stuff besides study. But you see, folks, I love doing it all and they always say if you love what you do it isn’t work.

And staying up to speed on stuff, I mean, I love doing that anyway, and my process now is simply information gathering. I’m not in the process of learning things. I mean, don’t take that the wrong way. I’m constantly learning, but the point of studying not to learn things. I’ve got the basic foundation of my existence, my beliefs, my principles and all that, so what I’m doing is just information gathering. And then I have an organized system where I can recall it if I need to on a moment’s notice. It’s not flawless, but it works for me.

So I was playing with that yesterday, too, just searching, ’cause Siri searching and music is what’s new in the upgrade yesterday, able to search HBO, Netflix, Hulu, and Apple for television content. (interruption) You cannot search your own library yet. That’s coming. Well, that’s a major code write. That’s home sharing. You’ve got your iTunes library of music and TV shows, and your Apple TV gets that via home sharing, and they haven’t written search for that yet, but it doesn’t matter because every song you have in your library is on Apple Music. They got 30 million tracks there. It’s just whether you own it or not, want to listen to it. But that’s coming. At some point you’ll be able to search your own library with Siri as well. They’re working on it. They’re rolling it out slowly.