RUSH: You know, folks, our society doesn’t have much of a chance. Have you heard what’s going on with Scalia lately? Do you know the real story about this? Okay, Scalia, US Supreme Court justice, is having a discussion about an affirmative action case, and in this discussion he happens to reference others who have made the point in the past. 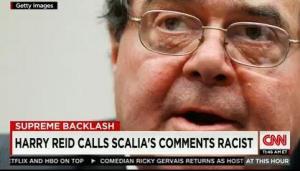 “Well, maybe it would be beneficial to African-Americans to send them to universities where they wouldn’t be pushed through as quickly and have to go as fast.” He was not uttering the philosophy or the belief himself! He was referencing it said by others. Doesn’t matter. The left has gone into gear. “Scalia, KKK! Scalia, racist! Scalia, anti-affirmative action! Scalia, bigot! Scalia insults blacks, thinks they’re stupid, unable to learn fast, shouldn’t get into University of Texas.” When this kind of purposeful my understanding — or the inability, maybe.

Maybe I’m giving these journalists too much credit for too much education and too many brains. Maybe they don’t know the difference. Maybe they’re unable to draw the distinction. Do you remember a city councilman in Washington, DC, some years ago, in a debate over the city budget, was forced to resign in shame because he used the word “niggardly” in discussing spending? All that is, is a word to describe a penny pincher, a tightwad.

But because it sounded like the N-word, there was an overwhelming national reaction and this poor guy was descended upon from every direction and forced out of office, and he hadn’t uttered one racial thought, word, concept, period. Neither has Scalia. But I don’t care where you go in the media, there wasn’t even an effort to understand what really happened here. All there was, was a mistaken report about Scalia offering an opinion on blacks and their ability to learn in the education system as it relates to an affirmative action case going on, and, bammo!

Because it fit a narrative, because it fit a template, it was reported as though it had happened, when it didn’t. Scalia was simply — as intellectuals do — talking about what other people have said. They talk about what other people think. They bandy it all back and forth. They either agree with it, mock it, make fun of it, or nothing. They discuss it. We’ve gotten to the point now where… By the way, this whole thing — this particular idea — was a serious proposal by somebody who was actually interested in African-American education being as good and efficient as it can be and coming up with ideas.

“Well, maybe it’s wrong to put them here, put them wherever, whatever.” It might have been offensive, but it was somebody oriented toward education, how to do it right, how to make it better. None of that matters. I mean, you don’t even have worry. There’s not even nuance here. This is just straight up and down, “Here’s what somebody said,” versus something they didn’t say. And that distinction is not even made. If our society cannot even be patient enough or understanding or educated or just downright smart enough to draw some distinctions here and to understand what actually is being said and what isn’t being said, we don’t have a whole lot of hope.

It just shows that there is an entire political class out there just waiting to jump on anything they think will enable them to silence others. Violation of political correctness or what have you. Furthermore, Antonin Scalia has a lifetime record. Antonin Scalia has written more words, articles, opinions, pieces, columns on what he thinks over the course of his life than most people will ever even ponder. And there’s not a word of racism or bigotry or any of the sort in Scalia’s opinions, writings, opinions, columns, you name it.

So this, I think, is the same kind of thing. Here Trump has proposed a moratorium on Muslim refugees until we get a handle on who the hell we’re letting in this country. We’ve got to have a way. We just found out from the administration that the whistleblower unveiled the fact that his investigation that would have revealed some things about the San Bernardino massacre was shut down because the administration didn’t want anybody to know what this guy had learned. Philip Haney’s his name, whistleblower. He was on Megyn Kelly’s show on Fox last night.