RUSH: Just released at 12 noon today: “Trump Hits a New High in National Poll — Donald Trump just got a little more vault in his ceiling. Nationwide, the polling-obsessed Manhattan multi-billionaire –” What is this nationwide the polling obsessed? Who’s polling obsessed here if it isn’t the media? What the hell? Why can’t you just report the number? Let me give you the number. Trump’s up to 41%. This is the Monmouth University poll.

Surveying voters identifying as Republican or independents leaning toward the GOP, Trump is at 41, nearly tripling the support of his closest rival, Ted Cruz. Ted Cruz, in the Monmouth poll is at 14%. Now, this is a nationwide poll. This is not Iowa. This is a national poll.

And there’s a Quinnipiac poll out released this morning. “Trump and Cruz in a Virtual Tie in Iowa.” CBS Eyewitness News 2 new Quinnipiac University presidential poll released today shows Trump and Cruz in a virtual dead heat in Iowa. The poll shows Trump with 28% support among likely Iowa cauci participants, Cruz 27%, Marco Rubio a distant third at 14, Dr. Carson is next at 10%, and is the only other candidate with at least 5%. So after you get to Carson at 10, nobody — Rubio, Jeb, Fiorina, Christie, nobody’s above 5% in the Quinnipiac poll.

Now, once again, you have something to consider here to show you this is nowhere near over. Trump has 41%. Now, if this poll is accurate, then this is getting close to wrap-up time. When Trump is at 28, 30%, the sum total of everybody-not-Trump is gonna be either that or more than that. So when you look at the Republican primary itself, you could honestly say that there are more people opposed to Trump than for him. Now, you may not want to put it that way, but that’s the way you’d have to slice and dice it.

If the sum total of all the other candidates is a number greater than Trump’s 30%, then you would have to say that the voters who supports somebody other than Trump is a greater number than what Trump’s is. So as the field winnows, as it will, it’s really important where those voters go. Say if Christie gets it. I’m just picking names here. I don’t know who’s gonna get out. If Christie gets out, Rand Paul gets out, if Kasich, Fiorina, where do their voters go? If their voters go to Cruz, big, go to Trump, also big. This we won’t know for a while, which is why I just found it extremely interesting the way Trump chose to go after Cruz, echoing the Republican establishment. I mean, one of the reasons Trump is doing so well is that he is perceived as the biggest anti-establishment candidate of the bunch.

I think also in this Monmouth poll that shows Trump at 41, you can’t take San Bernardino out of that. The fact that the San Bernardino thing happened and the Regime’s response to it has been pathetic, and Trump is the one guy who has stood up, and without any excuses, proclaimed what he would do. In fact, he’s got a new slogan out there now. Grab audio sound bite number nine. Fox News Sunday, Chris Wallace said, “This week you’ve been called a bigot. You’ve been called a fascist. You’ve been called a demagogue. I looked up the word ‘demagogue’ in the dictionary. It says somebody, a public official who seeks support based on appealing to people’s fear and prejudice. Is that what you’re doing, Donald?” 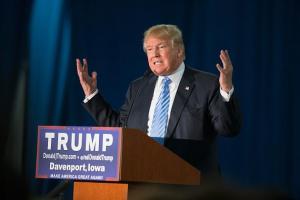 TRUMP: It’s the opposite. It’s called make America great again. It’s the opposite. I want to make our country safe. In fact, I want to add to it. Make America great again. Make America safe again. It’s not safe. We’re living in fear. I’m not creating the fear. People are living in fear. Look, there’s a problem. You don’t have to admit it, you never will ’cause you always want to be politically correct. Your father would have admitted it, okay?

RUSH: (laughing) That’s not necessarily true, but it’s still funny. He’s talking about Mike Wallace, Chris Wallace’s dad, for you Millennials out there. Anyway, so he’s got this new slogan: Make America safe, as well as make America great. He said something else on this show. He accused Hillary Clinton of being responsible for hundreds and hundreds of thousands of deaths.

And Chris Wallace, of course, was taken aback. “Well, what do you mean, she’s responsible?” He says (paraphrasing), “I mean, look at Benghazi. And I’m not just talking Benghazi. But look everywhere she and Obama have had their policies. Look what’s happening. There’s war everywhere. Thousands, hundreds of thousands, tens of thousands of people are being killed. It’s because of Obama and Hillary policies.”

There’s nobody else out there saying that, I guarantee you. There are tons of Americans who agree with it.