What Really Happened in 1964

Dr. Krauthammer, on The O’Reilly Factor last night on the Fox News Channel, O’Reilly says, “Trump at 41% nationwide. It is conceivable that Trump will run against Hillary. Is it not?”

KRAUTHAMMER: It would make the Goldwater result of 1964 look like a Republican victory. Hillary is an intrinsically weak candidate, not trusted by the electorate, who could in this year could easily be defeated by a half dozen Republicans. I don’t think that she can be defeated by Donald Trump. I still think he can win the nomination within the GOP, but when you go to the wider world and the wider constituencies, I don’t think that he has a chance of winning, and I also think that there is a chance of a complete collapse on the part of the Republicans that could jeopardize their hold on the Senate, and in an extreme case, even perhaps their hold on the House.

RUSH: All right, I want to take you all back to 1964. I realize many of you were alive then, but some of you might have been too young to be paying attention, and even if you were alive in ’64, you probably are unaware of much more than Goldwater lost in a landslide, and you’ve heard that the establishment hated Goldwater, they couldn’t take him out, and then Reagan came along, they took Reagan out. And Goldwater is where Reagan made a name for himself and launched. You probably know those basics. But there’s a lot about 1964 that people don’t know.

And Dr. Krauthammer, what he says reminded me of some of the things that went on in 1964 when Goldwater was that year’s Trump, meaning the establishment hated his guts. Now, they hated Goldwater because he was conservative, but after that, the reasons are pretty similar. He’s out of control. You never know what he’s gonna do. He’s dangerous, he’s irresponsible, you don’t want his finger on the nuclear button launch codes. The Republicans were saying this. So when it looked like Goldwater was going to win the Republican nomination, the Republican establishment convened a super-secret meeting to try to take it away from him at the convention, just as we heard that there was a super-secret dinner last week where members of the establishment were plotting ways to take it away from Trump if he wins it. 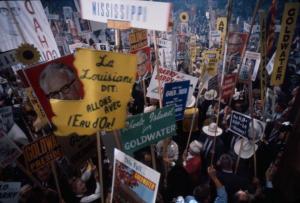 Now, back in 1964, the suspects were George Romney, Nelson Rockefeller, and I forget the third, but there were three of them that were attempting to have either a brokered convention or some other move designed to take it away from Goldwater. And they employed Nixon. They called Richard Nixon, who at the time was on the sidelines. And they said, “Richard, we want you to do what we need you to do to get rid of Goldwater.” And Nixon refused. Nixon refused to play the game and in fact became a bigger campaigner for Goldwater than Goldwater even was for himself.

But the point is, the same thing was said back then as being said today. And it became a self-fulfilling prophecy because the Republican establishment participated in torpedoing Goldwater. They didn’t want him elected. They didn’t want to win that election with Goldwater running. But because Goldwater ran, didn’t matter he lost in a landslide, because that 1964 election is what actually gave birth to what you now know as the modern conservative era, and nothing has been the same in the Republican Party since. Now, one of the things that’s consistent here, the establishment thinks that Trump can’t win, can’t beat Hillary.

They thought Goldwater couldn’t win, couldn’t beat LBJ. Didn’t matter. He couldn’t beat Kennedy if it was Kennedy. They didn’t want him to, and the establishment this year does not want Trump to beat the Democrat. They don’t want Trump to be the nominee. They’re not crazy about Cruz, either. But as I say — and I’ll find it in the stuff coming up — there are some establishment figures now beginning to speak a little bit more tolerantly of Cruz, just a couple of ’em. And it’s by no means universal.

My only point is that what is happening this year has happened before. It happened back in 1964 for different reasons. Goldwater was conservative. That’s why he was no good. Trump is considered no good because they don’t control him. He’s not part of them. He doesn’t have his power, he doesn’t have his support base by any mechanism they know and are accustomed to, so he poses a huge threat. He poses a huge threat to the very existence of the Republican establishment. And so does Cruz, which is why they’re all circling the wagons now.

This talk about how nobody can beat Hillary? You know why they’re saying that right now, among other reasons? Because Hillary is not saying anything. You know the old saw: The less she speaks, the higher her numbers go? She’s a horrible campaigner. The idea that Hillary Clinton can’t be beat is gonna be blown out of the water once the campaign begins and Hillary has to go out and speak every day. When she has to go out and speak, when she has to make public appearances, her numbers historically have dropped; in some cases, they’ve plummeted.

But she hasn’t been hurt from it. They schedule… They have a debate Saturday night. You know what else is going on Saturday night? New York Jets and Dallas Cowboys. What do you think people are gonna watch? Nobody’s gonna watch the Democrat debate Saturday night. Exactly as planned. Because the more people hear of Hillary, the less they like her. So, yeah, it’s easy to say now that there isn’t anybody who could beat Hillary because her poll numbers are up because she’s not talking. Wait ’til she starts talking.

Those polls numbers are not gonna stay high.

They never do in her case.