What Passes for Brilliance in Washington

RUSH: Speaking of crocks, here’s Obama. He tried to interrupt this program at one o’clock today, but we didn’t fall for it. He went to the National Counterterrorism Center, met with the intelligence guys, and came out and had a meeting with the media to talk about what we’re facing, what we’re doing, how everything’s okay; don’t sweat it. Here’s a portion of what he said…

OBAMA: With groups like ISIL trying to radicalize people to violence, especially online, part of our meeting today focused on how we can continue to strengthen our partnership between law enforcement, high-tech leaders, communities, faith leaders, and citizens.

OBAMA: We got keep on building up trust and cooperation that helps communities inoculate themselves from the kind of propaganda that ISIL’s spewing out, preventing their loved ones, especially young people, from succumbing to terrorist ideologies in the first place.

RUSH: Now, folks, this is just gobbledygook. See, this is what… We talked about “intelligence” yesterday, and Trump doesn’t have any, and all these intellectuals… This guy, Obama, passes for brilliance in Washington, in political circles, academic circles. “Well, part of our meeting today focused on we continue to strengthen our partnership between law and…” What partnership? What is this? Can you speak English? “Our partnership with high-tech…” You already are partners! Google is running everything you want to do.

“Partnership with our communities”? You’re at odds with communities. What is this “partnership business”? Faith leaders? Faith leaders don’t trust you, other than Reverend Wright. These are just citizens. Have you seen your approval numbers? And he gotta keep on “building up trust and cooperation that helps communities inoculate themselves from ISIL propaganda”? He means we have to inoculate Muslim communities from extremism. There’s only one way to do that, but you’re not gonna get me to say that ’cause I want to be here tomorrow.

RUSH: By the way, one other thing Obama said on his little meeting with the press when he came out after having met the intel guys at the National Counterterrorism Center: He again assured us that there is no threat against the United States. It’s exactly what he said shortly before the San Bernardino massacre. He also said that any refugee coming from Syria will continue to get the most rigorous screening of any screening in the world. He said, “Any refugee coming to the US will continue to get the most intensive scrutiny of any arrival.” There’s no way! It’s not possible. These people are not part of a database! The only thing we can do is interview ’em. 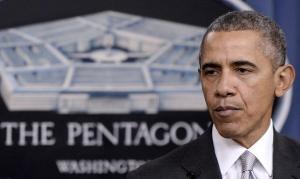 “Are you a terrorist?”

“No! No way! I have never blown up anything in my life, and I never intend to.”

“Fine, come on in. Next! Have you ever engaged in terrorism or have you thought about it?”

“No. No way. I’m insulted you would even ask. What would make you think that?”

That’s it! It isn’t much more than that. We ask ’em about their religion because we have to. If they’re fleeing religious persecution, we have to know what it is.