Will Trump Be Allowed to Win the Nomination?

RUSH: David in Pittsburgh, welcome to the EIB Network. Hello.

CALLER: Hey, Rush. Nice to talk to you.

RUSH: Yeah. It’s… Let me tell you something. It’s closer to reality than anybody ever thought, and all that has to happen is that he has to get a majority of the delegates, and the delegates are apportioned by virtue of the vote. And there’s —

CALLER: I just wanted to ask one more quick thing, Rush. Sorry to interrupt you, but a brokered convention. Could you explain that a little bit? ‘Cause I really don’t know what that means.

RUSH: Well, a brokered convention is basically where the powers that be get together and light cigars in the tradition. The old smoke-filled room. And then they start plotting ways to take the party and convention away from the voters and delegates, because they don’t like what the voters have done and the way the delegates are apportioned, so they get together. And brokering it means breaking it. They actually want to try to tear down the democratic process that has preceded the convention and relegate the democratic results to the ash heap instead.

While they then put the party back together as they want it. And we’re talking… It could be anywhere from 10 to 50 people in the smoke-filled room. Going by the bylaws currently, it’s not legal. It could not happen. A brokered convention is just a bunch of talk. I wouldn’t put anything past the establishment trying to save itself. But that’s essentially what a brokered convention is. But a Trump nomination here is clearly within eyesight. I mean, that’s the sobering reality. But I know where you’re going, and I have a keyword in this question I’ll explain in a minute.

RUSH: Okay, our last caller’s question: “Will Trump be allowed…? Do you think Trump will be allowed to win the nomination?” He’s bouncing off the fact that I once said, “The Democrats are no way gonna allow Bernie Sanders to be the Democrat nominee,” and so I need to clarify and explain what I mean. In the case of Bernie Sanders not being allowed to win, they’re not going to permit it. Like they’re doing. There’s no debates that anybody watches. There’s no opportunity for Bernie Sanders to grow and raise money, secure delegates within their process. I mean, the next Democrat debate’s Saturday night.

And you know what else is on Saturday night? The Jets and the Cowboys. Now, the Cowboys and the Steelers are the two most-watched teams in the NFL. The Cowboys could be 0-14 going into that game; it doesn’t matter. People are gonna watch that game. Nobody’s gonna watch the Democrat debate. Nobody’s gonna go out of their way to watch it. The last time they had a debate on Saturday night, it ended seven minutes early ’cause they ran out of things to talk about. This whole idea of a brokered convention actually stems from not too long ago.

A lot of people may not know this, but it wasn’t that long ago that nominees were actually not chosen until the convention started. There weren’t primaries. Some states had them, but they were not official in terms of assigning delegates. It used to be… This is why every night of convention night week was televised, and it’s why they went on for four and five days. It’s because the candidate, the nominee was chosen at the convention.

Speeches, votes, backroom deals, smoke-filled and otherwise. It wasn’t that long ago. So the idea of a brokered convention is actually just a link back to those days where powers that be don’t like what the primary system has produced and try to take matters into their own hands and get rid of it. But the way the rules, the laws that the parties have written to conduct their selection process go, brokered conventions are practically impossible to happen now.

And the primary reason is that a nominee is chosen by all these primaries, and there’s been a lot of money spent and a lot of delegates chosen. And to go in there and try to take that away and deny the democratic process would create more havoc and hell than anybody could imagine. Ben Carson talked about this yesterday. He said he’ll leave the party if they try any kind of shenanigans to deny the winner the nomination. So there’s not much… I mean, the question, “Can you see Trump actually being the nominee?”

Yeah. It’s right there in front of everybody’s face. But see, all this is gonna change once actual primaries and caucuses begin to happen. And one vote… Everybody’s going on polling data now. So we’re a long way from the nominee having been chosen. The Democrats’ is a lock. I mean, that’s done. They have secured the nomination for Hillary this time. They have made sure that no Obama-type figure joins the fray. It’s just Bernie and Martin. (snorts) So Hillary is already the lock. 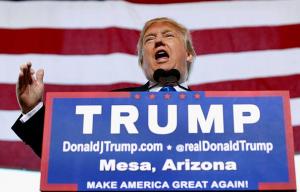 CALLER: Hey, I’ve been listening for 50/60 years to both sides screaming, “We have to get money out of politics.”

RUSH: Well, it’s not hard. They don’t really mean it when they say, “We need to get the money out of politics.”

CALLER: It’s absurd. And I thought that you could make sense of this to people out there. To me, you’re the Donald Trump of radio. You do it precise, and you speak to the people, and that’s why we love you.

RUSH: Well, I appreciate that. Thank you very much, sir. I think it’s more proper to say that Trump is the Rush Limbaugh of politics, but I’m not gonna haggle with you. I appreciate the nice words. By the way, Jeff, are you still there?

RUSH: Let me ask you a quick question. Vladimir Putin came out pretty much endorsed Trump. Does that bother you?

CALLER: Not a bit.

CALLER: Well, because I think that’s just Vladimir Putin trying to get Trump thrown out of the race. It’s just another pitchfork going after him.

RUSH: So you don’t think Putin means it?

CALLER: Of course, he doesn’t mean it! He wants Hillary in there. Somebody that can be bought. (laughing)

CALLER: (laughing) “Follow the money.” That’s what I’ve heard all of my life.

RUSH: Well, that’s true. Well, the reason I ask is Putin did come out and praise Trump as a smart guy, as a tough guy, as a no-nonsense guy. Unstated compared to Obama. And so I’ve found a couple places in the media where some Republican establishment figures were going, “Oh, my God, could this be it? Oh, let this be it. Let this be the beginning of the end of Trump. Trump voters are not gonna like it all that a Russian leader has endorsed him.” They’re hoping and praying that this could be the unsuspected, unknown little tidbit of information, and I frankly don’t think it’s gonna matter to Trump supporters that Putin came out.

Tom in Greenwich, Connecticut. Great to have you, sir, on the EIB Network. Hello.

CALLER: There’s been a lot of talk from the media and from the Republican candidates stating that “I can’t believe Trump would go after a terrorist or a radical leader’s family.” And in 1986, when Moammar Khadafy was the leader of Libya and was causing a lot of problems and blew up a discotheque that happened to kill some American soldiers that happened to be there, Reagan sent 30, 40 planes over, bombed Khadafy’s compound where he lives, and actually killed, I believe it was his young daughter. So it’s not something that leaders don’t do. If you’re at war, there is no target that should be taken off. So Ronald Reagan is our standard-bearer — well, next to you. But Ronald Reagan is our standard-bearer, and Reagan did it, so I’m all for Trump doing it, and if we had more presidents that had the guts to do it, ISIS might have been taken off the map already. 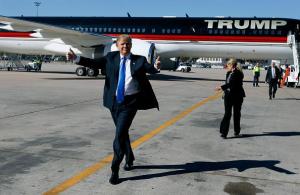 RUSH: Well, look, I understand quite clearly your point. This really revolves around yet another attempt to distort the point Trump was trying to make. And this is quite common. The Trump voter is a reasonable person with a decent amount of common sense. I’m convinced of that or they wouldn’t be as supportive as they are. So Trump comes out and says in the aftermath of San Bernardino, with everything in context here, knowing what we know, that the family of the San Bernardino Two were involved, Trump is saying we gotta go after them, too. His umbrella is we gotta keep America safe, and number two, we’ve gotta win.

You know, George Patton was right; the American people love a winner. Trump talks about two things: winning and preserving. He’s into safety, the defense of the country, protecting it, keeping us safe, and winning. And in that context, people know what he means when he says we need to go after these people’s families and so forth. People know what that means.

Then here come the efforts to try say that Trump is a wanton murderer who wants to open the doors of innocent family members and start gunning ’em down if they have any relationship to terrorism. And everybody knows that’s not what Trump means when he says these things. And in fact many in the common-sense view think that if we’re serious about fighting terrorism, we have to fight every avenue and every influence and everybody that’s part of a terrorist act. And, you’re right, it is in our history, the killing of citizens and civilians, that used to be how wars were won. That’s how you did it. Anyway, I don’t want to repeat myself. I’ve said enough here over the last couple of weeks.