More Evidence of the Trump Effect

RUSH: Here’s Kent in Sugar Land, Texas, great to have you on the EIB Network. Hi.

CALLER: Oh, Merry Christmas, Rush, to you and yours, and thanks for taking my call.

RUSH: You bet, sir. Happy to have you here.

CALLER: Thank you. The question I had is with Hillary most likely to be the nominee of the Democrats, do you think they’re going to have I guess a reverse Operation Chaos, where Democrats are going to be voting in our open primaries and or else registering for Republicans to mess up the Republicans’ primary?

RUSH: Well, let’s see. If they did do that, who would they be doing their own reverse Operation Chaos against?

CALLER: Well, I thought you’d ask that. Either Jeb, because everybody’d stay home, or else maybe Trump, because they don’t believe he has a chance.

RUSH: I don’t know that they would do their own reverse Operation Chaos, although it’s possible ’cause they were so bothered by it. They even made a movie about it starring George Clooney.

CALLER: I didn’t see it.

RUSH: Yeah, I think was The Ides of March or some such thing. The first third of the movie was how the Democrat Party was so blown out of the water by Operation Chaos. They were paranoid of it. So I think they probably would engage in something. But in truth, I think the greatest threat — well, hard to name one, I think the biggest problem, potential problem for Hillary and the Democrats and all those powerful forces is overconfidence. I think they’re gonna end up believing the polls that show right now the only Republican that beats Hillary is Marco Rubio. And that’s gonna change.

I think presidential preference polls right now are a little premature. They’re not that instructive because it’s too far out, and we don’t really have nominees now, so it’s just interesting trends and talking points for people that live and die with polls, but I don’t think it tells us a lot. As opposed to the polls now in Iowa and New Hampshire, they’re getting closer and closer to having results that you can trust, because we’re close now, and the people voting in those cauci and New Hampshire primary and so forth, they’re thinking about it more seriously now. And if we get into January it’s gonna be even more intense in that regard.

But I think if Democrats, if Trump’s the nominee, they think they’re gonna skate. And I think that they’ll largely go into a defensive posture, they’ll have all their PACs running oppo research trying to destroy whoever the Republican nominee is. But Operation Chaos, reverse Operation Chaos, I don’t know. I mean, if they tried it, we would spot it, you know, right off the bat we would spot it. The way Operation Chaos worked is the Democrats didn’t know until it was too late that it was happening, ’cause they don’t listen here.

From the Morning Consult: Why Donald Trump Performs Better in Online Polling. This is, I think, more proof of the phenomenon that I, El Rushbo, was the first to posit and name the Trump Effect. But I can’t take total credit for it because there is the Wilder Effect out there, which is much the same thing. And it is the theory that Trump has actually got stronger support than some of the polls indicate because the media has been so obvious in its opposition to Trump and so obvious in a disgust that when a pollster comes calling, the respondent will not say he or she is for Trump because they don’t want to be ridiculed by the pollster or they don’t want the pollster to think they’re one thing or another, so they lie. And that underreports Trump’s strength and the reason they think this ’cause online polling is where Trump just scorches it, and online polling is anonymous.

“Republicans are more likely to say they want Donald Trump in the White House if they are taking a poll online versus in a live telephone interview. And, if you’re a highly-educated or engaged Republican voter, it turns out that you’re far less likely to tell another human being you want Trump as president.”

Now, stop and think of that. If you are highly educated, engaged, if you’re an informed Republican voter and you are for Trump, it turns out you’re far less likely to tell somebody than other people are, because you believe that most of your friends couldn’t possibly be for Trump because they either say so or the media says that, so you don’t say what you really think. And I can provide anecdotal evidence to back this one up. The golf course, folks. I know some of you stick-to-the-issues people don’t like it when I talk about golf or the golf course. But that’s an excellent proving ground for this this this concept.

And the conclusion of this piece near the bottom: “How much this divide matters is hard to gauge. … What this divide does suggest is that some polling may be understating TrumpÂ’s actual level of support.” Now, you can hear the heads of the Drive-By Media exploding when they ponder this. And of course you can envision the heads of the Republican leadership exploding at the same time. This is the last thing they want to hear. This is the last thing they want to consider. They would like for the opposite to be true, that people are lying about their support for Trump ’cause they think it’s the cool thing to do.

They’re actually hoping that most people who say they support Trump don’t and that secretly there’s a bunch of support for Jeb out there that will show up when actual voting takes place. And if not Jeb, then Rubio.

Now, this next story’s from the Wall Street Journal. And this is something that — look, I don’t watch much cable news. I don’t mean that as a criticism, either. I’m just passing on information to you more than anything. And I don’t listen to much else either, and I never have, and that’s for competitive reasons. So I don’t know if other people have made this point, but I know that I have, and I haven’t heard it anywhere else. And that is, the makeup of the Trump coalition. 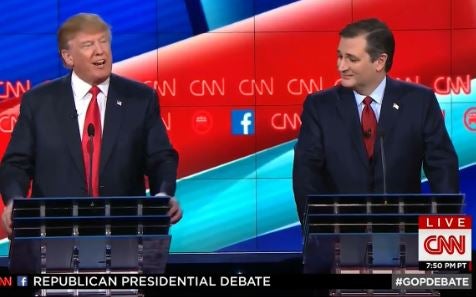 “The unique base of support that has pushed Donald Trump to the top of the Republican presidential field in national polls is also likely to give him boost this spring when the campaign shifts to the South. Sen. Ted Cruz of Texas has drawn wide attention for his own efforts in Southern states, many of which will vote as part of the big, March 1 ‘SEC Primary,’ when more convention delegates will be awarded than on any other day. Mr. Cruz, who is surging in the polls, is focusing on evangelical Christian voters and other social conservatives, which form the cornerstone of his support and are plentiful in those states.

“But a breakdown of recent Wall Street Journal/NBC News polling shows that Mr. Trump also has a likely base of support in those Southern states. And it comes with something of a surprise: Mr. TrumpÂ’s likely strength can be detected by looking at Republican primary voters who live in counties with large African American and Hispanic populations.

“Trump does particularly well in counties that the American Communities Project calls Minority Centers. Data from the last three polls show Mr. Trump has the support of 34% of Republican primary voters who live in those communities.”

Anyway, the point of all this is, the Wall Street Journal has done some investigation of its own deep polling data, and they have found that the Trump base of support is all over the place. The Drive-Bys will not admit a potential erosion in their base support. The Republicans won’t admit that Trump has finally hit the holy grail they’ve been seeking. But Trump is very strong in minority districts in the South. We just had a caller who made the point that 30 to 35% of the African-American people he works with support Trump, and the NBC poll internal data suggests that that’s actual data, not anecdotal.

Trump is also very strong with low income, lesser educated working people which used to be owned by the Democrats. The south is where the majority of delegates will be decided early in the Republican primaries, these SEC primaries. The point that I’m making here is that Trump’s support base is entirely unconventional. The Drive-Bys have their conception of it, the Republican Party has their conception of it, and they’re all wrong, and neither of them, when they’re faced with the reality, want to admit the coalition that Trump’s been able to put together. It’s all over the place.

It is exactly — I’m not exaggerating — It’s exactly what the Republican Party claims or says or thinks it has to do to win the presidency. You’ve heard ’em. They’ve gotta support amnesty ’cause they gotta reach out to Hispanics. They gotta reach to women ’cause of the War on Women. They gotta reach out to blue-collar working people. Well, Trump is drawing significant support from all of those groups just by being who he is. The Republican Party is trying to get those groups by agreeing with Democrats on policy, from amnesty, to contraception, bordering on some of the other social issues and immigration, may be even a little bit of Obamacare when you get right down to it. And that’s not working. 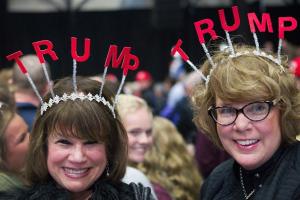 Trump is doing it, not by reaching out to anybody, just being himself. Trump does not have one plan, there’s not one specific plan or policy of Trump’s that’s aimed at a group. Trump is just taking his message out there. “Here’s who I am, we’re gonna make America great again. We’re gonna build a wall. It’s gonna have a great door in it. The Mexicans are gonna pay for it. We’re not gonna let any more terrorists into this country. We’re not gonna negotiate any more stupid deals, and we’re certainly not gonna make ourselves look like the problem in the world. We’re gonna be the solution.” Yay! It doesn’t matter where they come from, Americans are cheering it.

The political parties think you gotta go after group by group by group. You gotta have a message for this group, gotta have a message for that group. I have always said, I have always believed that the way to go out and actually put together a winning coalition is just go out and speak to people as though they’re Americans and to heck whether they’re men, women, Hispanic, Asian, black, white, gay, straight, it doesn’t matter, just go out and speak to Americans about their country. Now, granted there are a bunch of leftists out there who aren’t gonna be interested, but they’re still a minority, I don’t care what anybody says.

And it’s for this reason, by the way, all these polls that show Trump loses in an election to Hillary, I’m not sure you can say that yet. Everybody wants to believe it in both parties, interestingly. The Republicans want to believe it. The Democrats want to believe it. It’s way too soon to say. You see polling data out right now, Ted Cruz has pulled even with Hillary in some of these national polls. Six weeks ago, who would have believed that? Ted Cruz? I mean, Republican Party, Democrats, I mean, Ted Cruz, no more despicable, reprobate human being. You remember the image that Cruz had with these people.

Now all of a sudden he’s in a tie with Hillary Clinton in a head-to-head race for the presidency. Meanwhile, the biggest news about Hillary is she couldn’t get to the bathroom and back in one commercial break on CNN.