Sports Drive-Bys Conflicted on Odell Beckham and the Carolina Homophobes

RUSH: The Odell Beckham Jr., slash, Josh Norman story. There’s a backstory to this that actually starts with Rodney Harrison and the NBC Football Night in America pregame show on Sunday night. And the basics of this are that Rodney Harrison was a safety, and he’s gonna be in the Hall of Fame. Rodney Harrison was one of the greatest to ever play the game, one of the hardest hitting, one of the most penalized. I mean, the guy was just a beast, as they say in inside circles, tough as they come, just a great, great player. He started with the San Diego Chargers and ended with the New England Patriots.

And the past two or three weeks on that Sunday night NBC pregame show, Rodney Harrison and Josh Norman, the cornerback, number 24 for the Carolina Panthers, have had a little back-and-forth involving a wide receiver for the Atlanta Falcons named Julio Jones. It all started with Rodney Harrison suggesting that Josh Norman is not as good as Josh Norman thinks he is, but he’s gonna be if he keeps his head on the straight and narrow. I don’t want to get into too much of this, but the point is there’s a back-and-forth, Rodney Harrison dealing with Josh Norman.

There’s a generational difference there. Their ages are not that great, but there’s still a generational difference. Harrison has one way of playing the game, and these young guys have another way. Harrison has one way of respecting the game, these young guys a different way. And Harrison has been warning Norman (imitating Harrison), “Hey, you know what, you’re gonna be good, but you’re not that good yet. I was you, bud. I was you. I know, I’ve been where you are. I’ve made the mistakes you’re making. Don’t get so cocky off the bat here. You got a long way to go, pal.”

And Norman’s been saying (imitating Norman), “Who are you? You’re lousy at your job. I couldn’t care less what you say about me, Harrison, screw you.” Essentially those are paraphrases. So that’s a backstory that just involves Norman. So Norman’s had his talent questioned. He’s been talked down to by a vet and a retired player who is reputed to be among the best. Then you bring in this Odell Beckham situation on top of that. The only reason this backstory with NBC and Rodney Harrison is relevant is that it’s already amped Norman up, and Norman already thinks that all eyes are on him because of the back-and-forth he’s had with Rodney Harrison on this Sunday night NBC show. 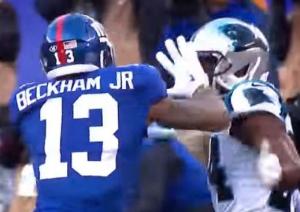 Josh Norman, number 24 with the Panthers, was judged to be a guilty party, too, but nowhere near as out of bounds and over the top as Beckham was. The real coup de grace for Beckham was in the third, maybe the fourth quarter, Beckham is a decoy wide receiver on a running play for the running back Shane Vereen, and after the play is over, Beckham doubles back and launches himself helmet-to-helmet into the head of Josh Norman right there in the ear hole. No penalty was called. It was headhunting, I mean, it was blatant what it was. He should have been thrown out of the game at that point, 15-yard penalty, you name it. Nothing happened.

Okay. So Beckham gets suspended. They announce the suspension yesterday, one game. He can appeal. The appeal’s gonna be tomorrow. The Beckham-New York Giants PR machine has gotten into gear since the suspension was announced, and the first thing that came out was, “Well, hey, you know what, the Panthers are not innocent players here. You know what Panthers did? They brought a baseball bat or two out to the pregame and they were saying the baseball bat’s part of the way they fire themselves up, saying, ‘bring the wood.’ Well, you don’t take a baseball bat out and you don’t start taunting the other team with a baseball bat.”

They were swinging the bat around. They didn’t threaten anybody with it, but just the very fact that they’re out there swinging a baseball bat. Black bat, relevant, too. The color of the bat matters, folks. It does. In our culture today, it’s a black bat, it matters. And then the media and the sportswriters all say, “Well, wait a minute now, that still doesn’t excuse what Beckham did.” So then the Giants and Beckham PR machine got into further gear.

Snerdley, have you heard the latest? Apparently in pregame warmups, the Panthers were making fun of Odell Beckham Jr.’s sexuality. Yes, indeed, they were intimating that he’s gay. They were calling him a ballerina. They were saying he’s got a cute bunch of dance moves, and this was preceded by postgame comments from Josh Norman who said (paraphrasing), “Yeah, he’s a little feminine out there. The kid’s a little bit over the top, acting a little feminine. This Michael Jackson routine he’s got going, that’s not football, that’s not how you play the game.”

So now the Panthers, according to the Giants PR — well, I don’t know who’s putting it out there, but obviously somebody trying to level the scales, and this has thrown the media for a loss now because if, indeed, Odell Beckham Jr. was a victim of homophobia and blatant homophobic comments, the media is caught. Oh, no, does that change everything? Does that explain why Beckham lost it all afternoon? Does that explain why Beckham was doing what he did? Does it excuse what Beckham was doing?

Now, some sports Drive-Bys who are as liberal as their news buddies, say it doesn’t matter, doesn’t excuse what he did, but it changes the thing greatly. It explains a little bit more why Beckham was do what he was doing before anybody knew that there were taunts, gay, homosexual, sexuality orientation taunts at Beckham from many on the Panthers team during pregame warmups. There was no penalty thrown on any of that, that was pregame. But it would if they did throw a flag on pregame stuff, which they have done. I mean, people have been kicked out of the game during pregame warmups. Joey Porter for the Steelers got thrown out once in Cleveland for it. And he’s not the only one. But, yeah, I guess you’d call it a hate penalty.

So, anyway, Beckham’s appeal will be heard tomorrow. A lot of people thought it would be today ’cause Wednesday is the first practice day of the week in the NFL. Tuesday is players day off if the game is on Sunday. So it remains to be seen now with the baseball bat, the taunting, the gay taunts, the homophobia taunts, all these other things. Plus now the specter is, wait a minute, now people are asking the question about Beckham. See, I mean, this opens a whole new window, a whole new can of worms. Why were they saying those things about Beckham? Oh, gee. Oh, oh, oh, oh. So people in the Drive-Bys are now really conflicted. And I love it when Drive-Bys get conflicted, folks. I’m sorry. I just love it.

RUSH: No, no. I’m not kidding you. And you ought to read the Drive-Bys. They’re reading how horrible it was that they called young Beckham names. The league needs to look into this. You should see the sports Drive-Bys on this. Okay, folks, for those of you that have never played football or have never been in a baseball locker room at the major leagues in the NFL, it’s brutal in there. There’s all kinds of teasing. There’s hazing, even on the closest teams, and particularly with rookies and young people and so forth, opposing teams to boot. These are men, and these are testosterone-laden young men. 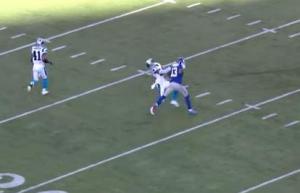 I guarantee you there isn’t any political correctness running around these locker rooms, but the sports Drive-Bys, who are imbued with left-wing Democrat Party political correctness, they’re outraged that players and the Panthers would call Beckham names. That’s just mean. And you know, many of the Drive-Bys are calling for an investigation into the Carolina Panthers to find out if indeed there were slurs being stated about Beckham. There are slurs, there are insults about half the time on the field during an average NFL game. These are men!

You know, it’s one of the last refuges of manliness out there. It’s one of the reasons the game’s so damn popular. There is nothing metrosexual about it. There’s nothing politically correct about it, although there’s pressure being brought to make the game PC. But, yeah, they’re all, “Oh, he called him names. The league really better look into that. That’s something we can’t tolerate. There needs to be an investigation.” I tell you, these people are gonna be the death of backbone. They’re gonna the death of strength. They’re gonna be the death of toughness. These metrosexual left-wing guys.

RUSH: Oh, yeah, the sports Drive-Bys, some of them, are now pushing for Odell Beckham’s suspension to be lifted and replaced to just a fine, since it might be that he was a victim of gay bashing, he might have been the recipient of gay insulting comments, they called him names and so forth. Well, that can explain. It doesn’t justify it, you understand, but it could explain Beckham losing his cool and going nuts out there and therefore lift the suspension and just fine him. There’s a movement on for that.

I have to tell you something here, folks, I don’t know where this comes from, everybody’s assuming that it’s Beckham’s people, the Giants’ people putting out the news that the Panthers were calling their player names. Stop and think of that. You NFL fans, can you imagine this happening back in the era of Stabler and Dave Casper and Al Davis? Can you imagine the news of the week about the NFL, a player being called names by the opposing team?

But anyway, here’s the deal. Here’s the thing. Whoever put this out, whoever is launching this story that they were harassing Beckham with insults of his sexuality and calling him a ballerina, making fun of his hairdo and his hair color, calling him Michael Jackson and flitting around out there and that that’s not football, I mean, they have just sent an engraved invitation to every opponent from now on out that that’s how you rattle Odell Beckham Jr.

The Giants have slim playoff hopes remaining. They gotta win out, and they want Beckham. They feel they don’t have a prayer without Beckham so I guess they’re willing to run the risk of turning Beckham into an every week target in exchange for having him this coming weekend. They play the Vikings. Oh, yeah, Sunday night game, Minneapolis, late December. Right. So that’s next to the Giants schedule. So there’s a lot of things here that just — I don’t know how many of you people read the sports Drive-Bys out there, but it’s a sight to behold. I mean, you would think that the Carolina Panthers, they’re all Donald Trumps, and they’re all out insulting everybody and it’s just unacceptable, and the league needs to investigate.