RUSH: Now, I mentioned Bill Clinton earlier. He made his first solo campaign appearance for Hillary in New Hampshire today. Now, I mentioned I wasn’t able to listen to the whole thing. It was rambling. It was not compelling. You know, the idea that Bill Clinton has this magic and this charisma and so forth, and I guess to Democrats he probably always will, but this was not vintage Bill Clinton.

Now, granted I didn’t hear it from the beginning, and I didn’t listen to the whole thing. That’s the point, I couldn’t. I had the chance to. It was before the program started. I’d listen to a couple minutes, I’d say, “I don’t even know what this is about or where this is going.” So I would turn it off and focus on show prep, other things. Then I decided to check back in with it later, you know, some few minutes later, and again, I could not tell what he was talking about even by listening to a two-minute segment.

One thing I did note. He did not lash out at Trump per se. He took an indirect swipe at Trump, and he did something that has become a popular technique that is employed by Obama all the time, predominantly Obama, but Democrats as well. Clinton essentially said how great it is that we have always been an open country and that we should not do anything to compromise our values, and that we must always stand up for our values.

You know, Obama’s always talking about this. His line is, “That’s not who we are.” Whatever he’s talking about Republicans want to do, “That’s not who we are. We have got to show our values.” And it always seems to manifest itself, in order for us to show our values, we must compromise them. We must abandon, in order to show the world — we don’t have to prove ourselves to the world anymore.

This is another thing that kind of burns me up. The world already knows what we are. That’s why they all want to live here. We don’t have anything to prove to anybody. We don’t have to prove freedom or liberty. We are it. That’s why people want to come here. We’re not some new country trying something that’s never been done before and we gotta go out of our way to show it and prove it and live it by example. We’ve done that for over 200 years. We’re not a mystery. And yet to listen to Obama and Hillary and now Bill Clinton today, somehow it is a mystery and the rest of the world can’t figure us out. We have got to show constantly our values. We cannot succumb to whatever it is the Republicans in this case might be proposing or Trump. Be it on immigration or refugees coming into the country or spending or whatever.

And, folks, it frosts me. You know, we do not have to commit suicide in order to demonstrate that we are an open country, or a nation of immigrants or whatever. And that’s what they’re trying to get us to do. There continues to be a record number of undocumented children that now have to be housed and fed, and that’s more spending, and no effort’s made to stop it, because that would be violating our values, being an open country. Well, just as it’s said the Constitution’s not a suicide pact, well, neither is any of the rest of this.

We do not have to commit national suicide in order to show the world our values. We’re not in a contest with Iran or Saudi Arabia when it comes to liberty and freedom. That’s already been decided. The rest of the world knows where they’d rather live. This idea that we have to keep proving ourselves, even if it means watering ourselves down and diluting ourselves. And there’s Bill Clinton talking about it, how we gotta remain an open country. What he means by that, anybody that wants to come in we gotta let ’em ’cause that’s who we are. 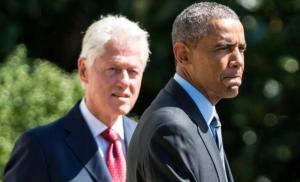 Well, it isn’t who we are. It’s never been who we are. We have always controlled who got in and what happened to them after they got here. We have asked them their religion, we have let them in or not based on that, we always have. To listen to Obama and now Clinton talk, that would be discrimination, we couldn’t do that, that’s a violation of our values. It’s not. Maintaining who we are is priority number one, not allowing that to be watered down, diluted, or destroyed. These people want it to be watered down, diluted, and destroyed, who we are, in the name of preserving our values.

It burns me up. And they act like at all costs we must do that ’cause every day we’re the ones who have to prove to the world our values. We’re the ones who have to show the world that we’re not what people think of us. It just burns me up, when the rest of the world already knows. The rest of the world, you know what they’re really doing? They’re wondering what in the world is the United States doing to itself, is what they’re asking. How in the hell can the United States be permitting itself to be attacked and dismembered this way. That’s what many responsible people around the world are asking.