RUSH: Here’s me on this program yesterday talking about Trump in Biloxi, Mississippi, on Saturday.

RUSH ARCHIVE: There were 15,000 people at this event in Biloxi, and Trump — now, this is an indication. Nobody else does this. Trump spotted a CNN photographer, and he had the presence of mind to know that the CNN photographer was not showing the entire crowd. And from the stage, Trump called this guy out and challenged him to show the entire crowd. (imitating Trump) “You get your camera, you aim it, you show everybody who’s here. You show the size of this crowd,” because they weren’t. He called ’em out on it. That’s something that doesn’t happen. The crowd stood up and cheered; they loved it. Because many of the people of this country know you’ve also gotta beat the media if you want to win an election. It’s not just the Democrats. You gotta beat the media because they’re one and the same.

RUSH: So here is Trump last night in Lowell, Massachusetts. And, by the way, I’m looking for the — I wonder what Stack I put this in. Here it is. Chris Cillizza. Our old buddy at the Washington Post. He’s starting to change his mind, a lot of leftist reporters. Remember, I told you yesterday that a lot of people reporting on Trump in the Drive-By Media are saying, “Well, yeah, yeah, yeah, he’s got a lot of crowds. I mean, these crowds are showing up, big crowds, but I don’t think they’re the kind of people that are gonna vote. I mean, Trump supporters, they’re showing up ’cause he’s a reality TV star, or because he’s celebrity. But I don’t know how many of ’em are gonna go vote.”

This has been a standard inclusion now in the last two or three weeks in every Trump story. It is a way the Drive-Bys are attempting to defuse the importance of the size of the crowds gathering to hear Trump. “Well, yeah, of course, but most of them aren’t gonna vote, and Trump doesn’t have a get-out-the-vote effort, he doesn’t have any ground game, so I don’t think it’s gonna be big.” Now they’re starting to change their mind because the media is showing up at these events and standing in line to get in, and they’re finding out that people are standing in line in 19- and 20-degree weather for hours, and they’re not even assured they’re gonna get in. It may fill up before they get in there, but they’re willing to brave that.

So now some reporters, “You know what? Maybe we have change our thinking on this. Maybe Trump’s people are committed enough to vote.” When Obama was drawing these large crowds in 2008, was anybody saying “Yeah, yeah, yeah, but these are not the kind of people that are gonna show up and vote”? How unique that is with Republican primary crowds. But Chris Cillizza here in the Washington Post: “This crowd shot from Donald TrumpÂ’s Massachusetts rally is absolutely mind-boggling.”

He was in Lowell, Massachusetts, five miles south of the New Hampshire border at a big arena rally last night and it holds 8,000 people. It was at the Tsongas Center arena, named after Paul Tsongas, well-known Massachusetts politician, Democrat candidate for president. Eight thousand people is capacity. It was overflowing. People lined up unable to get in, 20 degrees. There was a picture of the crowd. Cillizza saw it, that’s what his piece is about. This crowd shot from Trump’s Massachusetts rally is absolutely mind-boggling. And these crowds are nothing new. Trump’s been drawing these crowds for months now but to the Drive-Bys they’re all of a sudden noticing it.

And you know what else they’re noticing? Hillary doesn’t come anywhere near crowds this size, nor the crowds that show up for Hillary have anywhere near, not even half as much of the enthusiasm as Trump’s crowds. Bernie Sanders attracts bigger crowds than Hillary does. Bernie Sanders’ people are more enthusiastic. Some Drive-Bys, by the way, I saw it today in doing show prep, some Drive-Bys are now thinking that Bernie Sanders may actually do better in Iowa than the polls indicate. They’re really starting to get worried about Hillary. And you know something else that’s worrying about Hillary? Bill yesterday in New Hampshire was a bomb. Exactly as I thought. He was rambling. It was almost incoherent. 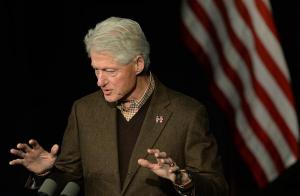 And there are stories today about how women in the audience were rolling their eyes as though they couldn’t believe what they were hearing. There were looks of boredom all around on the faces of women. At the first event, Bill Clinton shows up solo to campaign for Hillary, and they make the point that Bill is afraid to attack Trump because that’s a nonstarter. When he was asked questions about Trump going after his peccadillos with women, Clinton’s answer was, again, incoherent and off subject.

You couple that with stories that we had yesterday of a rising fear in the Democrat hierarchy that Hillary is not a shoo-in, is not automatic as they’ve believed all this time. So if they are reporting what they are about concerns with Bill and concerns with Hillary, then I guarantee you those concerns are at least twice as serious as they are being reported. Meanwhile, here’s Trump at the rally in Lowell, Massachusetts, last night.

TRUMP: I’ve never seen so many cameras in my life. We have a lot. Look at all the cameras here tonight, and all live television. You’re all on live. Wave. Hi, folks!

TRUMP: And I wish… You know, I always do this. I wish they’d turn the cameras and show the audience.

TRUMP: But they tend not to do it.

TRUMP: They tend not to do it. We won’t do it too much tonight. But —

TRUMP: Wow! They’re doing it! Wow! That is so amazing. They did it! They turned the cameras.

RUSH: Exactly right. Right after I called ’em out on it yesterday, the Drive-Bys turn the cameras and showed the crowd at the Lowell arena, the Tsongas arena in Lowell where Trump was. Hey, I’ll give you a little anecdotal story here. I was on the golf course Sunday, and it’s not far from PBI, Palm Beach International Airport. I’m on some fairway. I’m getting prepared to lace a 3-wood 240 yards, second shot on a par 5 going for the green. So I’m totally focused on the shot. When I hit the ball, nobody comments on my shot.

They said, “My God, Rush, you just missed Trump! You just missed Trump!” I said, “What?” “Yeah! The Trumpster!” They pointed to the sky. Trump’s plane had just taken off and flew over the golf course. These are guys that six months ago couldn’t have cared less if Donald Trump had driven by on a golf cart, but there’s Trump’s plane! It’s big. It’s a Boeing 757. It’s black, TRUMP in giant gold letters on the fuselage. You can’t miss it. It’s parked next to mine when he’s here in Palm Beach. So these guys say, “You just missed Trump’s plane! Trump just took off! Wow!”

My point is the excitement over seeing Trump’s plane take off. And this was Sunday, so he was… I don’t know where he was headed Sunday. Maybe back to New York from the New Year’s weekend; I don’t know. But he had been in Biloxi Saturday night, so he had obviously flown back here Sunday. This had to be in the afternoon about three. I don’t know where he was going, but maybe up to Massachusetts or New York, ’cause his appearance in Lowell was last night.