Trump, Cruz, Rubio Duke It Out

RUSH: As I was saying, a sound bite of Donald Trump last night during his event at the Tsongas arena in Lowell, Massachusetts.
TRUMP: I don’t read the speech. I don’t do the teleprompter thing, which would be so easy. Wouldn’t that be easy? I watched Hillary the other day. She has the biggest teleprompters I’ve ever seen. In fact, if you’re sitting on that side of the room, you can’t even see her. Because when they’re outside, they’re painted black, so you can’t even see her! But she’s got the biggest teleprompters.

We don’t need four more years of Obama, and that’s what you’re the getting with Hillary.

TRUMP: I believe it might be even worse if you want to know the truth. It. Might. Be. Worse.

RUSH: She’s got big teleprompters. Her teleprompters are so big, you can’t even see her. And Trump took after Cruz. He went after Ted Cruz last night in Lowell, Massachusetts.

TRUMP: He says, “We’re gonna build a wall.” Now, here’s a good thing: He’s a politician, so he wouldn’t know where to start. You know, I know how to build a wall.

RUSH: Right. Donald, Ted Cruz has said that when he’s elected president, he’s gonna put you in charge of building the wall. He knows. He knows that you can build a wall. But Trump went after Cruz last night. Here’s Ted Cruz last night NBC Nightly News, correspondent Hallie Jackson interviewed him. Question: “The race appears to be still between you and Trump.”

CRUZ: That seems to be an indication that something has changed in the race. Politicians behave a certain way when they’re panicking, and they engage in attacks. They engage in personal attacks. That’s human nature. I understand that. I’m not gonna get drawn into that muck. 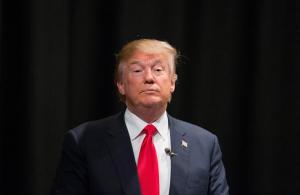 They all think they’re gonna have a shot at Trump’s voters. Marco Rubio was in Hooksett, New Hampshire, yesterday — this is good — and he was also on Fox this morning. Rubio’s coming under a lot of attacks on this immigration Gang of Eight bill, and the back-and-forth he’s having with Cruz. But this is the kind of thing that we remember Marco Rubio for months and months ago.

RUBIO: A man was elected who condemned America for having, quote, “arrogance” and “the audacity to dictate our terms to other nations,” a man who apologized for America and bowed pitifully to foreign leaders, a man willing to abandon our allies and make concessions to our enemies — and, worst of all, willing to make historic, devastating cuts to our military and to our intelligence capabilities. Now, for a while many thought this was just the result of him being naive. But it wasn’t. What became abundantly clear was this: Barack Obama was deliberately weakening America.

RUSH: And he picked up on that. This is the kind of thing Rubio hasn’t been saying in a while. He’s gone back to it and it’s only gonna help him. And he really expanded on that whole theme — what Obama’s doing is on purpose and by design — earlier today on Fox.