RUSH: Theories abound as to what Obama was doing yesterday at the pep rally on gun control. The first thing he was doing was attacking the Constitution. Make no mistake. I sit here and I have an objective — I’ve had it for a long time — and that is to educate as many people as possible about liberalism and how it operates, how to recognize it, what it is. It’s an ongoing thing; it will never end. It’s an ongoing educational process, and then after people learn it, there’s something about socialism that just attracts people.

I mean, socialism is the biggest fraud, one of the biggest frauds ever perpetrated to humanity. It’s been demonstrated to be a fraud time and time again. It has never, ever worked, and yet it still seduces people. And the reasons for that are psychological in large part, but they’re also financial: The promise of Santa Claus, the promise of equality and sameness and fairness and how that feeds into human nature. It just works, even though it’s demonstrated to be a total lie. Socialism has never even gotten close to working.

By illustration, we can have eight years of robust economic expansion, robust job expansion, eight years that actually led to a total of 20 — at least 15 — years of job expansion, wealth accrual, people’s incomes going up, deficits being reduced, debt being reduced, the number of jobs created expanding left and right. This was the Reagan eighties. People lived through it. And by 1992, all who had lived through it had been convinced that none of what they lived through had actually happened, that it was all smoke and mirrors, that it was fake.

And Bill Clinton’s elected. Now, one of the reasons is that the Republican Party stopped explaining why things were working so well in the eighties, and that’s its own bottomless pit because the Republican Party is not conservative. It never really has been, so it doesn’t tout it. So the effort is ongoing to try to get people to understand how liberalism is the fraud, how socialism is the fraud, empty promises and so forth, and how everything that liberals do is political.

Like gun control. It’s not about compassion. It’s not about saving lives. And that’s why the tears are phony. It’s not about any of that. It’s all about amassing and accruing and cementing more power for people in the Democrat Party at the highest levels of government. That’s the purpose of liberalism and socialism as far as they’re concerned, and so nothing’s real. Everything is spin. And I will expand on that when we get back.

RUSH: So, look, very briefly: That whole thing yesterday is an example. Obama’s pep rally, the whole thing was spin. And by that I mean none of it was real. It was all designed to present an emotion, an attitude that is not real. Liberals, by definition, cannot be honest about their true objectives. They’d never get elected. They would never win arguments. So they have to mask and camouflage everything, and they usually do so under the auspices of compassion and equality and fairness, sameness, kindness, and so forth, when they’re actually some of the most vicious, mean-spirited extremists among us.

Yesterday was a classic example. So I said, “The same guy who told you you could keep your plan and your doctor as he was preparing to deny you the right to do so — the same guy who told you your premiums would be coming down $2,500 — and who told you yesterday, ‘Oh, no. We’re not getting guns out of people’s hands. No, no, no, no,’ most certainly was.” The long-term purpose of that was to stigmatize legal gun ownership. That’s the objective. Now, they can’t come out and say that’s what they want to do. Who’d support them?

Obama can’t do a pep rally and say, “We’re aiming for legal gun owners. We are aiming for people who are not committing crimes. They’re the people we’re focusing on. They’re the people whose guns we’re gonna go after.” They can’t say that, but everybody knows that’s what they want to do. So how do they go about it? Well, they can’t get anywhere near honesty on it. So they have to cast this as something entirely different, something rooted in love of children, love of people, compassion for the innocent or what have you.

A little tear here or there proves and demonstrates the compassion. And then you set about to stigmatize the very group of people you’re targeting as the problem. Yesterday it was guns. One day it’s doctors. The next day it’s the rich. Whoever the targets are. The next day it’s Big Oil. After that it’s Big Pharmaceutical. The targets keep rotating; the attacks never end. And the purpose is to create, in the minds of as many people as possible, that all of these groups are the enemy of average, ordinary Americans — and that people like Obama are there to protect you and defend you from these vicious enemies. 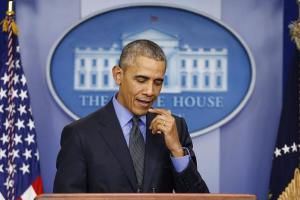 Yesterday it was guns. Who knows what it’s gonna be tomorrow or the next day. But it’s gonna be something else. We don’t have time to take a breath. It’s one crisis after another. It’s climate change, global warming, you name it, and there are always enemies that have to be tamed. The left is never even close to honest about what they want to do. And that’s why I say, “Everything’s politicized,” and spin is the best way to explain that.