RUSH: One other thing to clean up. We had the conversation yesterday about the Steelers-Bengals game on Saturday night, and when we started taking calls yesterday I was kind of surprised. I should not have been, but I was. The first two or three calls were from disgruntled Bengals fans who wanted to disqualify everything I said because they thought it was coming from the standpoint of me being a Steelers fan, and so that I was looking at and commenting on analyzing everything from the standpoint of being a Steelers fan. And I just want to assure you, my commentary on that game yesterday had nothing to do with being a Steelers fan.

Folks, to be honest with you, that’s an embarrassing win. To win a game like that, it is embarrassing. To win a game on 30 yards of penalties, 15 yards dead ball foul to put you in field goal range when you have been unable to move the ball in the fourth quarter ’cause the quarterback’s injured. I mean, we’ll take it, don’t misunderstand. But the Bengals lost that game, and my commentary yesterday was all about how they decided to lose that game. The players decided there were things more important than winning it. And I was just totally taken aback by it, and my commentary had nothing to do with being a fan of the Steelers and not liking the Bengals.

It was nothing more than purely 100 percent objective commentary and was really another in a long line of attempts and efforts to try to point out how there is politics in everything. How you can spot liberalism or the results of liberalism, such as cultural decay, in every avenue of life in this country. It has been a long-stated objective of mine, and there is no question in my mind that the breakdown in civility and the attitudinal problems that were on display by a number of players in that game are a direct result of the effects of liberalism on them when they were growing up, on their childhoods, on the formative influences in their life.

There’s no question in my mind. Liberalism is entirely destructive. It destroys things; it destroys people. It’s in the process of doing great, great damage to our country, and it has to stop. And the evidence is everywhere.

So all I’m attempting to do here, whether it be a football game or a political speech or something happening on the screen — a TV or movie or some other pop culture event — is simply attempting to point out to people that virtually every destructive thing happening has links and roots to a political philosophy called liberalism that is the official ideology of the Democrat Party. And I mean that. And I’m not exaggerating.

And I’m not trying to create any kind of anger or outrage. I’m not trying to make anybody mad. I’m just telling you the way I see it. That’s what I saw on that game Saturday — and, by the way, I’ve been seeing it in the NFL long before this game. This game is simply the latest development in a slow and steady decline in the culture, the National Football League, and our country at large.

CALLER: I called to talk about the Cincinnati game.

CALLER: Rush, that had to be the ugliest football game I’ve seen since watching the old Oakland Raiders. They weren’t trying to beat ’em. Cinci was trying to mug ’em. That one dude tried to break that dude’s neck. And those Cinci fans, they’re as bad as the Philly fans throwing Santa Claus and throwing snowballs at the ref years ago.

RUSH: Well, the whole game wasn’t. The fourth quarter was. And there were indications. You could see the pot was boiling from the get-go. Folks, I don’t know. I didn’t mention this to you and I don’t know how many of you know it, but during pregame each team gets one half of the field to warm up. They had a veritable military cordon at the 50 yard line to keep these teams separated for the one hour, the 45 minutes of pregame. It wasn’t military people, but officials, referees, giant security people straight down the 50 yard line making sure the teams did not interact during pregame.

It’s tough to single out any football game as worse than anything I’ve ever seen, and then you say since the John Madden Raiders. I know it’s a reference to George Atkinson and Jack Tatum. Back then, you know, Chuck Noll, the coach of the Steelers, after Lynn Swann had been taken out of a playoff game with a forearm shiver to the head, and he wasn’t even in the play, it was by Atkinson, in a postgame comment Chuck Noll talked about there being a criminal element in the NFL.

I think it’s tough to single out one game and say it’s worse than ever. It was just bad in its own right and in and of itself. It was bad. It was stupid. I can’t get over how stupid. I’ve never seen a game lost this way. I have never seen it. There may well be many games, I haven’t seen nearly every game played, but I’ve never heard of a game being lost in this fashion. And it was done purposefully.

All of it could have been avoided. None of it needn’t have happened. None of it was provoked. And even if it was, walk away. You are 14, 25, whatever it was, seconds away from the next step in the playoffs, when your team hasn’t been since 1991. Anyway, I appreciate the call, Eric.

We got a quick time-out. We got more people that want to talk about this. I’ll tell you, it’s a big deal, folks, culturally in ways that people may not even be able to specifically say, but they understand, they get it.

RUSH: So Snerdley tells me that people from Cincinnati are calling him just in a rage. I’m not coming at you people today as a Steelers fan. I told you at the outset, this is kind of an embarrassing way to win the game. I’m not gloating at all here. I’m worried. Look, there’s some things I just can’t come out and say. I gotta hope you people pick up on it. Would you work a little harder?

RUSH: Gabriel, Riverside, California. It’s great to have you with us, the EIB Network. Hello, sir.

RUSH: All right, I’ll explain this to you. There are answers here. You may still object, but I can tell you the reasoning behind it. He’s a lone Carolina Panthers fan out there in Riverside, California. He’s talking about the game between the New York Giants, Carolina Panthers where Odell Beckham lost it and went nuts and incurred three separate personal foul penalties against number 24, Josh Norman, cornerback for the Panthers.

And in one instance, after a play was over, or, for the most part, Beckham had run a pass pattern out on the right seam from the slot. The ball was not thrown to him. He turned around, and, with a 15-yard flying start, launched himself helmet-to-helmet into the head of number 24, Josh Norman, right into his ear hole of the helmet there, which is a particularly vulnerable spot. Flags threw. It was the third time that flags flew against Beckham. People were asking, “Why didn’t Coughlin take this kid out of the game? Why didn’t the refs throw this kid out of the game?” The announcers even, who try not to comment on this stuff ’cause they want to protect the league, even they were overwhelmed at what Beckham had done.

The next day Beckham was suspended one game. And what old Gabriel here wants to know is how come that guy only got one game when Vontaze Burfict of the Bengals got three. Well, it’s because those were isolated incidents for Beckham and first time occurrences, Gabriel. But Vontaze Burfict has been fined nearly a half a million dollars over the course of his career. He was fined for three separate hits, illegal hits against the Steelers in their last meeting in December in Cincinnati. One of them was an illegal hit — flag was not thrown, by the way — at Roethlisberger’s ankles.

The week before this game, Gabriel, Vontaze Burfict tried to decapitate a tight end for the Baltimore Ravens, who was also not involved in the play. The play was over. Helmet-to-helmet, not shoulder-pad-to-helmet. Got fined 50 grand for that. So there is a, shall we say, pattern of behavior where Burfict is concerned, and the league has decided that the fines are not having an adverse effect on his behavior, meaning they’re not helping him. The guy is willing to pay tens of thousands of dollars in fines.

So the next step is the suspension, which is the first three games of next season. Do you realize this guy was not drafted because of this? He was this kind of player in college. He was not drafted. He’s a great player. That’s the thing about this game against the Steelers. This was a career performance. This was the greatest game of his career maybe, and he blew it up, threw it away. So there are problems here, folks.

Look, as I said at the top of the last hour, there’s some things I just can’t… I can’t go all the way here. You people are gonna have to work a little harder at understanding what’s at stake here and what’s going on. I’m not coming to you from the standpoint of being a Steelers fan at all. This thing goes way beyond fandom. This is symbolic. It is representative of things happening culture-wide, the way it’s dealt with, the way it’s handled, the authority figures saying they can’t do anything about it.

RUSH: You people in Cincinnati: Would you get off of this?

For the last time, none of this has anything to do with me being a Steelers fan. None of it. And if you want to hear me criticize Joey Porter, “What difference does it make now?” as Hillary Clinton’s famously said. Okay, so Porter shouldn’t have been out there. The thing is if you know that a coach is gonna go out there to provoke your players and if you’re a player knowing that Porter’s coming out to provoke you, walk away! What kind of an idiot knows full well that a coach is coming off the sideline to provoke you, and you fall for it?

And this Mike Munchak business, that little thing that happened in the sideline. The pulling of the hair. I don’t know. You know, there’s no penalty for pulling the hair in football. Did you know that? You can tackle somebody by their hair. If you’re gonna wear long hair, it’s fair game. But that pushing and shoving, that’s not any big deal in the big scheme of things. And, by the way, by the way, here’s the big thing for you Cincinnati fans. Now, I’m gonna put on a little fandom hat here. You people Cincinnati all upset over Ryan Shazier’s hit on Gio Bernard? 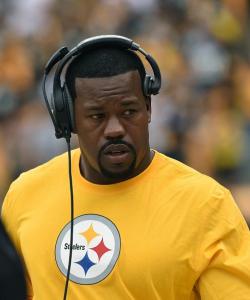 There’s nothing about that game recommends itself in the big scheme of things.