RUSH: Karen, Pensacola, Florida. It’s great to have you with us here on the EIB Network. Hello.

CALLER: Hey, Rush. First-time caller, long-time listener. I gotta shout out to my dad and my sister who I’m sure are listening. I’m calling because I’m from a conservative little town, Pensacola, Florida. It’s a military town. We get political rallies all the time. Everyone wants to come here to conjure up votes, but I had never gone to one. My degree is in government and politics from years ago. I’ve always been interested but never gone to a political rally. I was not going to miss Donald Trump.

And I went to this rally — and Rush, I listened to your last caller and I have to disagree. I don’t think the mainstream media is a fan at all of Trump’s. In fact, at this rally, he proved a point to all of us it wasn’t. There was not even standing room in our convention center. It’s never been full like that. In fact, the word was that he had to turn away 5,000 people. He was on fire, and he pointed at the camera people in our little section, said, “Come on, show all of these people! Show how people care like I do about our country,” and the media would not even turn their cameras.

RUSH: I know. I know. I watched all this; I saw the camera. They were rock solid.

CALLER: The next day in the newspaper, it didn’t make any mention of the overwhelming crowd and how excited our town was. So I just have to say, I never thought I’d say the mainstream media and the Republican Party would be in the same place. And having that in common, what they have in common is they’re in denial of Donald Trump.

RUSH: Well, wait just a second now. You might be a day or two behind things. In the first place, they finally have published pictures of the rally from the rafters to get in there. I’ve seen a couple of pictures from inside the arena that show it was bursting. I knew about the 5,000 people that got turned away, and the Drive-By Media has examples here all over the Stacks of Stuff today. The Drive-By Media and the Republican Party are reported now as being more and more willing to acknowledge or open to the idea that Trump could win. And I found this.

This ran on Breitbart. You know Joe Scarborough, who was a member of the House Republican freshman class in 1994, and now he hosts the Morning Joe show on MSNBC from 6 to 9 every morning. And he’s from Pensacola. The Trump rally is on Wednesday night. Thursday morning on MSNBC Scarborough says that it was unprecedented, that he has never, ever, seen anything like that in Pensacola. He said it was unprecedented for Pensacola to draw such attention for a presidential event.

He said, “I was at George W. Bush’s campaign rally in 2004, the final stages of that presidential race, early November. I saw Reagan come to Pensacola twice in 1980. I saw those crowds. I never saw anything like Trump and his crowds in my hometown before.” Scarborough said it was absolutely staggering. “Here we are in early January,” he says. “I’ll be honest with you: I guess seeing it in your hometown… I didn’t get it as far as the size of these crowds go. It’s like nothing I ever saw with Reagan, nothing I ever saw with Bush. It’s nothing I saw with any political candidate, what I saw come out of Pensacola last night.”

What he’s saying is, there have been a lot of these rallies that Trump’s had all over the country, and they’ve all been same. Whatever the size of the venue, they turn people away. If the venue’s 15,000, they turn people away. If the venue’s 2500, they have to turn people away. Everywhere Trump goes is filled to the rafters and people are turned away. What Scarborough is saying is, “Yeah, you know, that stuff? It didn’t really make an impression on me. You see it reported and big deal.” But the minute he saw it happen in his town where he has seen all kinds of rallies before, finally he’s saying, “It hit me.

“We’ve never seen anything like this.” Perot didn’t draw crowds like this. He says that Rubio showed up and 150 people showed up at his rally sometime in the past. He said if anybody goes — presidential candidate, sitting president, ever came — to Pensacola and got 300 to 400 people, it was considered a success. And here they had whatever that arena held, 12,000, 15,000. So I think it probably… It might even be a wake-up call. Plus, a day after Obama’s State of the Union show (which had the lowest ratings of eight years of State of the Union shows), here’s Trump the next night out Pensacola. 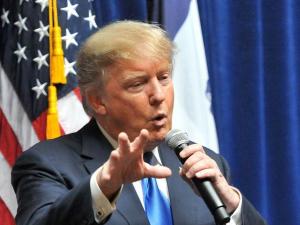 Scarborough’s saying, “Look, you know, I’ve got experience in that town. This town doesn’t show up for people. They’re not that impressed. I’ve never seen anything like this before.” A lot of people are in denial. You wouldn’t believe the number of people that still think Trump’s gonna implode. He’s gonna say something that’s so wacky, embarrassing, he’ll have to quit. The Bush people… You know Lindsey Graham endorsed Jeb today? (interruption) Did you see that? (interruption) Well, but the point is it happened, and that means that somebody, somebody over there in that camp thinks that it can still happen.

There’s no evidence that Trump has hurt himself at all with anything he said. Despite any evidence, there are still a lot of people who think that is going to happen. There are people… (interruption) Well, not just Jeb. I mean, a whole bunch of ’em, a lot of people in the politics class, the donor class, the consultants, all of ’em think that when people show up and vote or caucus, that’s when it gets really serious — and they’re not gonna vote Trump. “They’re gonna come to their senses and realize there’s so much more going on, it’s far too important. It’s been a game up to now, but when it gets real, Trump isn’t gonna matter a hill of beans.”