The Establishment Sidles Up to Trump?

RUSH: So as I was saying last week, we had the establishment, who’s been upset at me for not taking on Trump, all of a sudden now deciding to sidle up to Trump. That’s the story, or that’s the news. There were stories left and right about how the establishment’s decided that it’s gonna be Trump, and they want it to be Trump. They don’t want to it to be Cruz, because Cruz is conservative. That’s why they don’t like him. They also don’t like Cruz because he’s better than they are. They don’t like Cruz because he’s smarter than they are.

They don’t like Cruz ’cause he’s committed to it.

When they say — and this is what they’re saying. The establishment’s saying, “Yeah, yeah, yeah. We can make deals with Trump. We can coexist with Trump.” What they mean by that is that they think they can peacefully coexist with Trump because they can moderate Trump or make deals with him that are not ideological in nature. But they know, they are fairly certain, that Cruz is not gonna compromise what he believes in order to strike deals or have peaceful relations with ’em, to have a relationship. That scares them.

It’s a personal dislike of Cruz and resentment; he’s smarter, he’s more consistent, he’s unbending on the core beliefs and things that matter. And then I think it was the Daily Caller last week, there was a story about how the establishment was deciding to step up and get in bed and do business with Cruz. I mean, it was… I saw both stories last week. The predominant one seems to be that the establishment has decided Trump would be the lesser of two evils for them. But now it all may be out the window with Bush in South Carolina.

The donor class is who they prefer to listen to, for the most part, and the consultants who are every bit members of the establishment as well. They have been doing their best… Well, they’ve been doing two things. They’ve been hoping that everybody would eventually see Trump the way they see him. And they see Trump as a pretender, a charlatan, a Barnum & Bailey Circus act who’s unserious, maybe not even a Republican when you get right down to it. But more importantly than that, somebody they can’t control and can’t do business with.

They’ve been doing everything they can to undermine him, thinking it’s gonna happen, trying to urge it. And over here they’ve got Cruz who they literally despise because he’s principled, conservative, and they can’t deal with that. They don’t want to deal with that, and they are intimidated by it. Make no mistake about that. So that’s why the hateful comments come about Cruz, his personality and so forth and so on. But in the midst of all this, like I was saying just in the last hour — and I commented on Friday, in fact — how the establishment’s now decided that Trump may be inevitable.

And so they are going to sidle up. They are going to… In an effort to keep this all away from Ted Cruz, they are going to make an accord, so to speak, with Trump on the theory that Trump is nowhere near as principled as Cruz is and thus would be open to making deals with them as they wish to deal with the Democrats and other accredited members of the establishment or ruling class. When it comes to Cruz, they don’t see there’s any way of Cruz bending and shaping to them. So they’re thinking maybe they have a better shot at having a coexistence where they run the show here or there with Trump.

Now, I’m not gonna whether they’re right or wrong. It’s not the point. The point is that in this campaign, as you let your emotions get ratcheted up in one direction or another, don’t forget that, at the end of this process, there is still the Republican establishment to deal with. And maybe in the in the midst of it, in the midst of the process, in the midst of the primaries. Trump, they think they can deal with as of today. If it’s Cruz they probably would do what they could to — well, you’ve heard ’em say they’d vote for Hillary.

I mean, you’ve seen it; I’ve seen it. There have been numerous stories out there — some of them have even allowed themselves to be quoted — that if it’s Cruz (and some of them have said it about Trump), that they would vote Hillary. Now they’re moderating in their attitudes about Trump. And that’s only because they haven’t been able to stop him and they don’t see… Jeb’s certainly not rising to the task, and you see Rubio with some problems here. So they’re at their wits’ end.

My only problem is just keep your eye on them during all of this as you do with the two candidates or three or however many you think are viable.

RUSH: Steve Schmidt ran McCain’s campaign. Normally huge, big, anti-talk radio, pro-establishment guy. He’s on Meet the Press, and Chuck Todd says, “Is this fight, the one between Cruz and Trump, is this the fight the establishment’s been waiting for?” 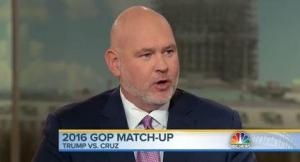 SCHMIDT: Look, right now you look at Trump’s strength across the country and the national polls, all these establishment candidates — Kasich, Rubio, Bush, Christie — they need Ted Cruz to beat Donald Trump in Iowa. If Ted Cruz doesn’t win the state of Iowa, Donald Trump is gone. He’s gonna win New Hampshire. He’s gonna be very, very tough to catch as this race moves south and moves into the bigger states.

RUSH: Fascinating. We analyze this one, too, when we get back.

RUSH: Okay. So what Steve Schmidt was saying here, the establishment right now is rooting for Cruz in Iowa because they think if Trump wins in Iowa, he’s gonna run the table and it’s over. And yet there are stories about how the establishment is now thinking they’ve gotta pretty much get in bed with Trump. But don’t forget what I think is the blockbuster of last week. This guy’s last name, his last name is O’Connell. He’s a young Millennial. He’s a Republican consultant, strategist, advisor. He’s at their retreats and so forth. He’s the guy who wrote and believes that if Cruz is the Republican nominee, that’s the worst thing that could happen. No, that’d be the second worst thing. Then the worst thing that could happen would be Cruz elected president.

This is a Republican fundraiser, consultant saying that Cruz winning the presidency would set the Republican Party back a generation in the modernization it must have if it’s to survive long-term. The Republican Party must make peace with the gays, he said. We must make peace with the LGBTs. We’ve got to get serious about climate change. And what else did he say? Oh, yeah. We have to understand once and for all that the Reagan fetish is over and done with. We’ve got to cast it aside and never, ever go back to it.

Now, he’s not alone. There are a lot of Republican establishment types, that’s why I’m telling you, keep your eye on them. No matter how this primary works out, because they’re still gonna be there after we have a winner and thus a loser. If they don’t get what they want here, don’t be surprised if they undermine… this is, this is… well.

RUSH: Yeah, that’s the guy. Ford O’Connell. He is the author of that piece we quoted Friday, maybe Thursday, late last week. But he’s not the only one. I want you stop and think of that. And if you didn’t hear this last Thursday or Friday, whenever, I want you to hear this now. Ford O’Connell is a Republican establishment Millennial — young guy, fundraiser, strategist, whatever these guys call themselves. But he goes to the establishment meetings, the retreats and so forth of the party leadership and actually has written that for the party to succeed long-term…

It’s exactly what you’ve heard them all say.

We have to do comprehensive immigration reform. We can’t any longer stand in the way or oppose this. We’ve got to get rid of this fetish that some of the old Republicans have with Donald Trump. We’ve got to broom that. As long as we keep having this “fetish” with Reagan, these ties to the eighties, we’re gonna forever remain a backward minority party. We have got to “modernize,” and this guy went as far to say that if Ted Cruz — or take your pick of any other conservative nominee. If any conservative nominee wins the nomination and wins the White House, that will set the party back.

Now, stop and think of that.

If a conservative Republican wins the White House, this guy and others like him think it will set the party back and bring to a screeching halt this much needed modernizing. You know what this is? This is a bunch of newfangled Republicans (and I use the term very liberally) who are deciding the Republican Party consists of A, B, C, D, and E. And within that A, B, C, and D is conservatism. Let’s face it, the Republican’s number one identity is conservative, small government, less intrusive. Now, we know that hasn’t been in practice for a long time, but that’s the imagery.

They want to broom that.

So they don’t really want to become Republicans. What they are trying to do is redefine what “Republican” is under the existing umbrella of the party and have it change. You can call it a silent coup d’etat, so to speak, if you will. Some people look at conservatives as running a coup against the party. I don’t think that’s what’s going on. The party, to one degree or another, has always been known as the party of low taxes, pro-entrepreneurism, pro-innovation, pro-liberty, pro-freedom, freedom, Constitution, all of that, smaller government, smaller taxes, less intrusion, fewer regulations.

This new bunch wants no part of that.

Why don’t they just become Democrats?

Wouldn’t it just being simpler to join the Democrat Party? That stuff that you want’s already there. And if that’s how you want people to think of you, that you don’t like Reagan, that you’re very much into gay marriage and all that, just become a Democrat. I’m sure they’d love to have you! But no. They want to come in, and under the theory of “saving” the Republican Party, they want to modernize it and turn it into something it really has never been. And that’s the battle that’s been going on here the past 20 years, and you could even take this battle back and say it was being fought during the eighties with Reagan.

But it’s really intensified. I don’t know why they don’t just sign on to the Democrat Party and be done with it. Because it is they, actually (if you ask me), who are trying to take over the Republican Party. It looks like it’s conservatives trying to, but we’re actually being pushed out, or marginalized. And we’re at a point now where the establishment, the people we’re talking about, don’t like either of these two front-runners, because neither of these front-runners take the party where these brainiacs think the party needs to go. Trump doesn’t for whatever various reasons, and Cruz doesn’t because he’s a conservative.