RUSH: Let’s start the audio sound bites. This is a montage of media trying to say that all of a sudden they have become biblical scholars and Trump doesn’t know what he’s talking about when he starts reading scripture at Liberty University yesterday.

SUNLEN SERFATY: Wrongly referring to it as Two Corinthians instead of Second Corinthians.

ANDERSON COOPER: Plenty of people who know the Bible chapter and verse have been weighing it.

CHARLES LANE: Going on about Two Corinthians, which didn’t represent the Bible correctly.

RUSH: This is a joke, folks. These guys don’t know what they’re talking about. Here all of a sudden the Drive-By Media, which hates anything to do with the Christianity, wants to try to pass themselves off as scripture experts? So they have read somewhere where one person says, “Hey, Christians don’t talk about Two Corinthians, it’s second Corinthians.”

It’s just funny to listen to the Drive-Bys here who probably wouldn’t know a Bible if somebody put it in front of them, acting like they now know the distinction between Second Corinthians and Two Corinthians. Here’s David Brody. This is CBN network, Christian Broadcast Network. He’s the chief political correspondent there, and he’s interviewing Trump, and he said during a discussion of Trump’s purported slipup yesterday, “Two Corinthians instead of Second Corinthians,” and they had this little exchange about it.

BRODY: Already on Twitter they’re — you know, and even some of the campaigns are — saying “‘Two Corinthians’?” You want to clear any of that up?

Well, I’ve actually over the years heard it both ways, but I would say probably I prefer saying “Second Corinthians.”

TRUMP: But I’ve heard it, as you have, both ways.

RUSH: (laughing) This is so… Folks, did you see this yesterday? You know, I just have to laugh. A lot of people get mad at me for not getting righteously indignant and offended when Trump does what he does. But this is why I asked you yesterday, “Does it not bother you devout believers that he talks, ‘The Bible slams it’? That doesn’t bother you?” He’s getting ready to read “Two Corinthians,” as he said, and he’s got an audience here at Liberty University. “Okay, this is it. This is it. This is what you all really believe, right? This is the thing. In a nutshell, this is it for you, right?”

I mean, he’s got an audience of Christians there, so it’s time to relate to ’em. “See, this is it for you, right? I mean, this is all… It’s all wrapped up right here. I mean, this is it. The Bible slams it. The Art of the Deal is a close second, but this? This is it, right?” And he reads it. And halfway through it he stops and says, “Am I right? Am I right? This nails it, right? This is all it, right?” Yay. So he treated biblical scripture as though it was just a, you know, quote from a Thomas Sowell column or something else.

I just sit here and I marvel at it. Remember, I come at this from a little bit different angle than everybody else. Everybody thinks that the only way to judge this is from the rigid dictates of political ideology. I study this as performance art as well. And it is great performance art. Here’s what Trump continued saying, because David Brody said, “You’ve said in your book and you said just a few days ago that you have a great relationship with God. How do you see that relationship, Mr. Trump?”

RUSH: Okay. I’m not… It’s out there. There it is. (interruption) What are you laughing at, Snerdley? (laughing) But he’s not… Look, here’s Obama. Let’s go back to December 9th, 2014. This is in Nashville. Obama held a town hall event on immigration, and during the event he tried to quote the Bible.

OBAMA: The good book says, uhhh, y’know, don’t… uh… don’t throw stones in glass houses, or make sure we’re looking at the log in our eye buh… Before we’re pointing out the mote in other folks’ eyes.

RUSH: Now, nobody in the Drive-Bys said, “What the hell is he talking about?” Nobody said, “Who…? What… what … what … what verse is he citing here?” But he came off as totally illiterate here on a verse on the Bible. “The good book says, uhhh, y’know, don’t… uh, don’t throw stones in glass houses…” No, that’s “People with glass houses shouldn’t throw stones.” This is… This is… I don’t know, folks. It’s just.

RUSH: Okay. Here’s one of these sound bites where my inclusion in it is deceptive. The editing here is deceptive. It’s ABC’s Good Morning America. The correspondent is Tom Llamas and he’s got a report here about Trump’s “Two Corinthians” slip yesterday instead of “Second Corinthians” or “Second Letter to the Corinthians,” if you want to really, really drill down deep. It ended up in this, and here’s how it sounded.

LLAMAS: And now Rush Limbaugh issuing this warning to voters.

RUSH ARCHIVE: There are a lot of conservatives who think that he’s a wolf in sheep’s clothing, that he’s a traditional, lifetime New Yorker — and that means something.

RUSH: Okay, so, yeah. I said that but not during this episode. I said that during a discussion of Cruz’s strategy in going after Trump. And when I said, “There are a lot of conservatives who think that [Trump]’s a wolf in sheep’s clothing, that he’s a traditional, lifetime New Yorker — and that means something,” I did that in a context of what Ted Cruz is trying to do. It was not part of the Corinthians thing, but they’re trying to make it look like that I am adding fuel to the fire by saying Trump’s a fraud because he also didn’t know “Two Corinthians.” 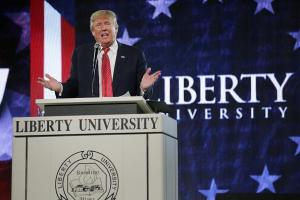 Not only that, he’s not a traditional conservative, a lifetime New Yorker!

This is how these guys do this. Now, I don’t think Tom Llamas has the slightest idea. A producer put this thing together, put the script in front of him, put him into a studio, and said, “Read it,” and Tom Llamas read: “On Monday, Donald Trump quoted scripture at Jerry Falwell’s evangelical Liberty University…” He does the bit, comes out of the booth, they put it on the TV show, and that’s it. (interruption) Well, you think I’m making it up? Listen to it again. Listen to this guy. Play sound bite number five. “On Monday Donald Trump, quoting scripture at Jerry Falwell’s evangelical Liberty U… Listen. (replaying of sound bite) Okay, that’s enough. Up next, Good Morning America, George Stephanopoulos talking with Jonathan Karl about the battle between Trump and Ted Cruz.

STEPHANOPOULOS: What about this factor now, these talk radio host like Rush Limbaugh weighing in?

KARL: We may have reached a pivotal point in this campaign where those influential voices on talk radio are starting to turn on Donald Trump. Until now, these have been some of Trump’s most reliable cheerleaders. But in this latest fight they are siding with Ted Cruz. And it’s not just Limbaugh. That “New York values” attack from Cruz drove people right back to what Trump himself said 20 years ago. As you know, he was pro-abortion rights, open to gay marriage, because he is from New York, not from Iowa. This is the attack that could really hurt.

RUSH: Right, and “it’s not just Limbaugh.” That’s what Cruz… His attack forced people to go back found Trump said that on Meet the Press back in 1999 with Tim Russert, which sound bite we also aired yesterday. So, well, Jonathan Karl says (summarized), “We may have reached a pivotal point in the campaign, these influential voices on the right from talk radio starting to turn on Trump! Until now, these have been some of Trump’s most reliable cheerleaders, but in the latest fight they’re siding with Ted Cruz. Trump was asked about this and said…”

Did you hear the joke? “Two Corinthians walk into a bar and one of them said, ‘Did you hear what Donald Trump said?'”

RUSH: I just got an e-mail. “Dear Mr. Limbaugh: I am much more worried about 20 million illegal aliens and a hundred thousand Syrian refugees than I am Two Corinthians. Could we please stay focused here? Trump hasn’t lost focus, and I don’t want you to.” (laughing) People are indeed able to look at this with a sense of humor.