Bernie Sanders is not gonna be this party’s nominee. And all of you Bernie-ites out there, you Democrats that are getting on board the Sanders campaign and thinking, man, it’s almost gonna be utopia, nirvana time. Remember, that’s what you thought back in 2008 when we indoctrinated Obama, and look how badly that’s worked out. And it isn’t gonna be Bernie. You guys are being played for the saps that you are, you Bernie supporters.

“Are you saying that Hillary’s not in trouble?”

No, no, no, I’m not saying Hillary’s not in real trouble. I’m telling you, you look at what Debbie “Blabbermouth” Schultz has done. They’ve done everything they can to keep this party operating behind the curtains so nobody knows what’s really going on. What do you think Hillary out there praising Obama all night in that debate was all about? She hasn’t been doing that. She’s been trying to distance herself from Obama. Let’s call it what it is here. From the earliest days of the Democrat campaign, we made the point here, and Hillary came through that she had to differentiate herself from Obama. And in the early days, she was criticizing Obama. Remember our reaction here was, wait a minute, you’ve been there. You’ve been running this country for seven years. How in the world can what Obama has been doing not have been good?

Now, I don’t know if she’s reacting to that or what’s going on, but all of a sudden that debate Sunday night she and Obama once again are best friends. Total 180. And it’s not fear of Bernie Sanders. Beware the media mantras, the narratives, the templates, the conventional wisdom. I just chuckle when I read stories here or there about Bernie Sanders could win Iowa and New Hampshire. Bernie Sanders is outraising Hillary. Can we remember who we’re talking about here? We’re talking about the Clintons. And do you really think they’re gonna sit around — I mean, I saw a story where, see Bill the other day, his hand shaking like the onset of old age. Poor old Bill, he may not be able to hang in this campaign. He may be fading even as we’re speaking. Might not have the strength. All of this stuff. 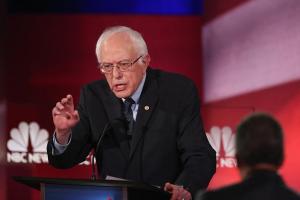 You look at Bernie Sanders, really? Bernie Sanders, crazy Bernie? We’re all being played on that. But, anyway, Molly Ball acknowledges that the Democrats have their own problem. And they do. None of their stuff works. The Democrat Party’s an absolute mess if people ever got the true story figured out. Everything the Democrat Party’s implemented is bombing royally. Health care is an absolute mess, the national debt, spending, you name it, immigration, transformation of America, the cultural rot that this administration has introduced. It’s a mess.

This country is hanging by a thread, all brought to you by the Democrat Party. There isn’t a single happy, smiling, laughing Democrat. Even Madonna can’t handle it. Madonna is showing up at her concerts overly served in adult beverages. She’s showing up two and three hours late for concerts, the National Stadium the latest place. Nobody out there on the left is happy, certainly not crazy Bernie. So they do have their own problem.

RUSH: So Senator Dick Durbin, Illinois, is out there saying that Bernie Sanders could easily win Iowa and New Hampshire. Let’s play a little game. If Bernie Sanders wins Iowa and New Hampshire, then I predict you are going to see panic and rats scrambling around in the Democrat Party like you haven’t seen before. I mean, when Obama made it clear he was gonna beat Hillary back in 2008 — and remember, Hillary benefited from Operation Chaos being orchestrated and run from right here at the EIB Network. She’d have been out of that race three months earlier if it hadn’t been for Operation Chaos.

But with Obama coming on, that was new, fresh, African-American, historical, it was cool. It was, wow, I mean, oh, wow. But with Bernie Sanders, an aging 81-year-old Brooklyn socialist upsetting once again the applecart of a Clinton coronation, I guarantee you that it may not take Hillary losing South Carolina after that for that race to be over. But I just don’t see it. I have to remain true to my proffered opinions, not that I’m inflexible and can’t come off of them.

I just, for the life of me, I still think what’s going on here is a well-orchestrated campaign to make it look like Hillary had to fight off this major, big, huge, unexpected challenge. The powers that be thinking much, much better picture of Hillary Clinton fighting off and surviving a big challenge and overcoming the odds and proving that she can do it, as opposed to a coronation to her, top to bottom. So we will see.

RUSH: This is Steve in Bear, Delaware. Great to have you, sir. Hello. 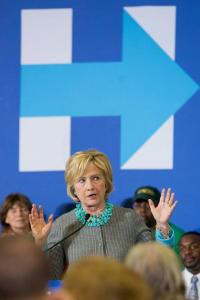 CALLER: A real thrill, Rush. Real thrill. Hey, after Hillary’s indicted, I want to make a prediction that the Beltway’s own Crazy Uncle Joe Biden will reluctantly agree to be the candidate for the Democrat Party.

RUSH: Well, there have been others who have advanced this theorem. There’s two schools of thought on this, and one is that there will be no indictment of Hillary because if there is… Don’t forget there’s Bill Clinton involved here, and Bill Clinton’s played a lot of golf with Barack Obama. On the golf course, Bill Clinton would be perfectly fine saying (impression), “Hey, now, Barack? I just want to tell you something, Bud. Heh, heh. You know, I may be a little older than you but that doesn’t mean I don’t know the game.

“I mean, if you even think of indicting Hillary, you’d better be prepared, ’cause I happen to know she’s not the only one that’s been doing stuff, and I got the goods. (sigh) So I hope you have great tee shot. Keep it in the fairway next time. Let’s keep playing.” Or Obama doesn’t want Hillary or Bill Clinton anywhere near his agenda and this drip, drip, drip, drip, dripping all this stuff out about the investigation and the 150 FBI agents and the leaking news on how much evidence they’ve got and that he is indeed gonna have ’em drop the hammer and she is gonna be indicted.

And Joe Biden, the way he said he wasn’t running? I’ve never seen a guy who said he wasn’t running and announce his agenda at the same time, which is what Biden did. And Obama would totally trust Biden with his agenda. Biden has shown 110% loyalty here. So both schools of thought are out there, and you can take your pick as to which one. I don’t discount the fact that Bill Clinton’s lurking out there, and anything done to his wife that would have a negative impact on him, he’s gonna come, jump in, and do something about it with his own version of threats.