Trump’s Unique Response to Me

Cruz is going after Trump as a secret member of the establishment. Cruz is trying to highlight Trump’s past liberalism, “New York values,” what have you, and say, “You people are really… You’re falling for a really well-packaged joke and trick because Trump is the establishment. He is every bit the establishment that you don’t like and oppose.” And what I’ve detected is that Cruz… Now, we’ll see if this works. Cruz, as opposed to trying to say that Trump is not a real conservative, is going to go after his populism. The theory that Cruz has and a lot of people have, is that Trump is not a conservative Republican; he’s a populist.

And that’s the area you have to go. You have to discredit his populism. Cruz’s theory on that is to blow it up and say, “He makes you little people think he cares about you. He makes you little guys think he’s on your side. He can talk like you and he can relate to you, but he really isn’t that.” That’s what Cruz’s objective is. Not to try to disqualify Trump as an illegitimate or legitimate conservative, but rather to go after his populism. We’ll see how that manifests itself.

I gotta take another break here. I got phone calls lined up and the aforementioned audio sound bites. Including this one. Go ahead. Grab sound bite number 24. It just came in, just came in over the transom. Winterset, Iowa, at the John Wayne Birthplace Museum. Donald Trump spoke, and during the Q&A, an unidentified reporter said, “Mr. Trump! Mr. Trump! Rush Limbaugh and Senator Cruz have warned voters that you may not be a real conservative. What do you say to this?”

TRUMP: Well, I am a real conservative, and Rush has been terrific to me and Rush has really been amazing to me, and I actually read what he said, and he’s still amazing to me. So I appreciate everything Rush has done for me a hundred percent.

RUSH: And we’ll be back.

RUSH: I think we have time to squeeze this in. This is unique in that most people asked about me do not even acknowledge having heard what I said that they’re being asked about. Trump… Well, here, listen to it again.

TRUMP: Well, I am a real conservative, and Rush has been terrific to me and Rush has really been amazing to me, and I actually read what he said, and he’s — he’s still amazing to me. So I appreciate everything Rush has done for me a hundred percent.

Snerdley said, “Wow! That just doesn’t happen. These people are asked about you and they say, ‘I haven’t heard what Rush Limbaugh said. I didn’t hear what Rush said.’ They’re afraid to critical. But very seldom somebody as boldly as that! ‘Oh, yeah, yeah! I have no a problem with it. Everything’s cool. Back off, media!'” 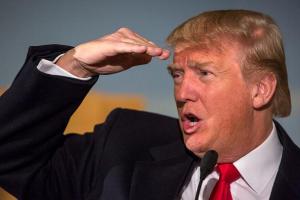 RUSH: What? (interruption) Oh, you think this sound bite is a lesson in how not to answer a question? He answered the question. The question was, the unidentified reporter to Trump, “Both Rush Limbaugh and Senator Cruz warned voters you may not be a real conservative. What do you say to that?” He said, “Well, I am a real conservative. Rush has been great to me.”

You know, this kind of is illustrative of some things, because in some of these sound bites as you will hear, I said, things they quote me as saying, but not when they quote me as having said them. It’s the old-out-of-context trick. But I don’t think they even know. I think they just go to Media Matters and they read a summary of what happened on this program. That’s how these reporters find out what happened here. It’s the most amazing thing. I have my own website with word-for-word transcripts — and this is on the free side.

I have my own website where you can listen to my monologues and my phone calls. It’s all recorded for posterity and history. It’s all there. RushLimbaugh.com has duplicated by 25 or 30 times the Encyclopedia Britannica in terms of the voluminous amount of data and information — and, of course, the informed opinion that is out there. All of the words have been spoken, but they’re transcribed as though they’re written. So we present it as the written word at RushLimbaugh.com, and anybody can go there and find out what I said.

They go to a media “watchdog” site, and they knowingly purloin things taken out of context, maybe things not even said at all. I’ve had quotes made up that I never stated, never did — quotes attributed to me that were never said by anybody! It’s always amazed me. I mean, we go to incredible expense to put this website together and then keep it updated during the course of each busy broadcast day, and the clowns that report on this program don’t go there, or very few of them do. But it’s all there.

And you will hear what I’m talking about when we get to the sound bite roster here. First story: “Trump Ups the Ante: ‘Everybody Hates Ted’ Cruz.” This is the Washington Times, and Trump is behaving here true to form. When he is criticized for something, saying something he shouldn’t have said, saying something that’s incorrect, he doubles down on it. He always has. He never backs off. He never revises his opinion or his remarks. He just doubles down ’em.