A Legal Analysis of the Planned Parenthood Case

RUSH: Now, the grand jury down in Houston over this Planned Parenthood thing. Here you have the Harris County DA convene a grand jury with these two people from the Center for Medical Progress. These two people, guy and a girl from the Center for Medical Progress go in and make secret video tapes of having lunch with or meetings otherwise with members of Planned Parenthood, they get ’em on videotape and audiotape talking about chopping up dead babies and selling them, in some cases, live tissue parts, dead tissue parts, selling them for profit. They pose as potential buyers.

So a grand jury is convened in Harris County, Texas, which is Houston, for the apparent purpose of compiling and creating, presenting evidence against Planned Parenthood for what they’ve done. And in the process, something goes terribly wrong and the two people from the Center for Medical Progress end up being indicted for criminal behavior in the way they secured the videos, and now they are subject to 20-year jail terms. So I reached out to some trusted legal people, and this is a sensible take on what happened. And it does involve a rogue prosecutor who was able to take the circumstances on the ground and do a 180 with them.

And here’s the point. In a regular criminal investigation that is undercover, which is what the two people from the Center for Medical Progress, they essentially went in undercover. They were disguised as potential buyers. That is key here. In a regular criminal investigation that’s undercover, the police undercover operatives, the black bag operatives, the undercover agents and their undercover informants have immunity in the criminal transactions they are negotiating. Like if you go undercover to score big heroin deal you can’t get prosecuted for buying heroin in the process because you’re granted immunity as part of being an undercover agent, right? Makes sense?

So even though journalists, the two people from the Center for Medical Progress, even though they didn’t really want to buy baby parts any more than any undercover cop really wants to buy a bag of crack cocaine, you have pro-abortion activists in the DA’s office, you’ve got a Planned Parenthood board member in the DA’s office who are taking advantage of the fact that the undercover journalists from the Center for Medical Progress do not have immunity protection, the same as an undercover officer or confidential informant would have, and so they can be charged.

So all that has to happen is that your rogue prosecutor, working in concert with your pro-abortion activist in the DA’s office, get in the grand jury room and start explaining all this to the grand jury, which is made up of your average Hillary voter, for all we know. And you start explaining what really went on here. Here we have this great organization, Planned Parenthood, that’s trying to plan families and trying to protect women from the terrible, almost fatal disease of pregnancy, and here come these rogue agents disguised as journalists, but they don’t have immunity, and they’re the ones who’ve engaged in criminal activity.

RUSH: Here is Ellen in Rochester, Washington. Great to have you on the Rush Limbaugh program. Hi.

CALLER: Hi. I was thinking about how politicians say that they’re gonna do something before they’re elected into office, and they never follow through with it.

CALLER: And so Mike Huckabee stuck up to the town clerk who wouldn’t sign the marriage license, rallied behind the woman. I believe her name is Kim Davis. 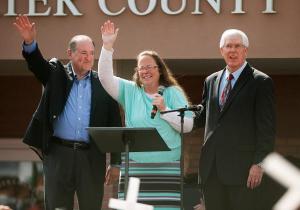 RUSH: Well, see, this is another somewhat glaring example. How many…? Mr. Snerdley, you follow this kind of minutia. How many defund-Planned Parenthood votes have there been? (interruption) One. How many have there been talked about? How many times have we heard, “We’re gonna defund this! We’re gonna take care of it! If you elect me, if we get the Senate, if we get the House” or whatever? It’s talked about it a lot all the time.

It doesn’t happen, and this is just chalked up as another reason why people are worn out on promises and assurances from the establishment. But in this case, this grand jury and what happened here? If you’ve got… If this is right and if this prosecutor decided to go after these the two video makers, ’cause they didn’t have immunity like other undercover cops do, and therefore they committed crimes and we’re gonna go after them instead of Planned Parenthood? This is gonna be fascinating to watch how this shakes out.