Cruz: Only I Can Stop Trump in Iowa

RUSH: Ted Cruz. Grab audio sound bite number 14. Ted Cruz has a brilliant point. This is a really, really crucial — a good point for Cruz that he’s making now as we are into the final week prior to the caucuses taking place in Iowa.

CRUZ: If Donald wins Iowa… He right now has a substantial lead in New Hampshire. If he went on to win New Hampshire as well, there’s a very good chance he could be unstoppable and be our nominee. Even if you’re thinking about another candidate, the simple reality is there is only one campaign that can beat Trump in this state. And if conservatives simply stand up and unite, that’s everything.

RUSH: Now, this is important because Cruz is right. Now, I know that there are many of you out there that are on the Trump bandwagon. I know a bunch of you aren’t. I know a lot of you are angry that people are on the Trump bandwagon, and you don’t understand it, and you’re ticked off about it. But if you are in Iowa and if you are one of those people, I don’t care what you think of Ted Cruz: He’s right about this.

He is the only candidate in Iowa, according to the polling data, who has a chance of winning Iowa other than Donald Trump. And that’s according to the polling data. Strange things happen in this state because caucuses are different than showing up and voting, and polling there is not quite the same as it is in other places. But thematically, philosophically, he’s exactly right here. Theoretically, if Cruz doesn’t stop Trump in Iowa, there may not be any stopping Trump. That kind of momentum has been built up already.

RUSH: So Ted Cruz is making the point that, according to polling data, depending on the poll, he’s either ahead in Iowa — there’s a WHO poll out that shows Cruz ahead in Iowa. And it’s interesting that none of the Drive-By Media outlets are interested in the poll. You can’t find it anywhere except if you know somebody that knows somebody at WHO and they forward it out or text it out to you, or whatever. But you won’t find anybody picking it up. They pick up all the other polls that show it either nip and tuck or Cruz trailing Trump now.

But regardless, there isn’t any chance for anybody other than Cruz to beat Trump in Iowa. And the only reason I mentioned this is I think Cruz had a very good point. I mean, if you are interested in stopping Trump, if Trump’s not your ball of wax, Cruz is your guy, if you’re in Iowa, Cruz is your boy. That’s the only chance. And I don’t know, the political professionals out there, the ones who claim to have all the answers, are indeed saying that it’s hard to see Trump being stopped if he wins Iowa where he wasn’t supposed to two weeks ago. He wins Iowa, goes on to win New Hampshire, goes down to South Carolina, it could be over. And Cruz is making that point, and look, it’s a good campaign move, and it happens to be exactly right.

RUSH: Now, back to the Republican campaign. I want to pick up again with Ted Cruz. Three sound bites here, and then a reminder of the story running in TheHill.com today about Donald Trump and his assurance on MSNBC today that he can work well with Democrats in the Senate, that he knows Harry Reid, he knows Pelosi, he knows Chuck Schumer, it’s not a problem, he can work well with ’em.

Judging by my e-mail, by the way, this is a red flag for a lot of people. But, anyway, here’s Cruz. This is yesterday in Cedar Rapids, and it’s a great campaign pitch, actually, for people on the fence or people who are opposing Trump but may be thinking of voting for Rubio or for Rand Paul or Jeb Busg, whoever, this was Ted Cruz’s message to them. 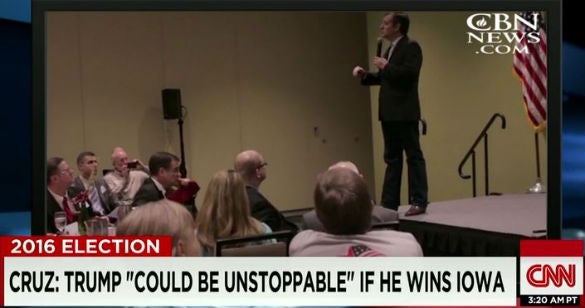 CRUZ: If Donald wins Iowa… He right now has a substantial lead in New Hampshire. If he went on to win New Hampshire as well, there’s a very good chance he could be unstoppable and be our nominee. Even if you’re thinking about another candidate, the simple reality is there is only one campaign that can beat Trump in this state. And if conservatives simply stand up and unite, that’s everything.

RUSH: Now, about that last thing Cruz said, that I happen to know has been his guiding philosophy since he got into this race. I had lunch with Ted Cruz a couple of years ago. It was in November when David Horowitz has his thing here. What’s that called? Restoration Weekend? It’s restoration, not reformation, it’s restoration? Yeah, a bunch of people come down and make speeches, people pay to come down to hear the speeches, spend the weekend at the hotel resort, The Breakers.

I had lunch with Ted Cruz, and he was going on and on and on about if every conservative in this country was unified behind a candidate or an idea, that it would be unstoppable. And he spelled out for me how he thought that could be made to happen. And obviously he wanted to play a role in it. But he has believed that for as long as I’ve — and I don’t speak to him frequently, don’t misunderstand. I’m not trying to say we’re buddy-buddy. That lunch that we had, he made a big deal out of conservative unity. If conservatives simply stand up and unite, that there’s nobody that can stop them. And they don’t. I mean, conservatives are fractured like every other political group.