Caller: When Will People Wake Up?

RUSH: Here is Wendy in Houston. Wendy, you lead off today. Great to have you with us on the program.

CALLER: Oh, my goodness. It is such an honor to talk to you. Thank you so much for everything that you do.

CALLER: Thank you so much, and my children love your books, so thank you, thank you. Start with that.

CALLER: So thank you. Huge honor. I just want to call, because I’m listening to this, and I am a huge anti-establishment, cannot stand all of that, but yet I still don’t get it with the Trump thing because he doesn’t stand for our conservative beliefs and values, whereas there is a candidate who does. Cruz stands up for what we believe in, and he is anti-establishment. So I don’t understand how Trump can continue to say these things, especially have the audacity to support Planned Parenthood and all that he did on Saturday, and still the people won’t leave him who consider themselves to be conservative when there’s a very viable option. So I’m hoping you can help me understand.

RUSH: Look, I’ll say this again, and I need you to hear me this time. The majority of Trump’s support base is not the Republican base.

RUSH: The majority of Trump’s support base is not conservative. There are quite a few, but I don’t think they’re the majority. And if they are the majority of the Trump support base, it’s a very, very tiny majority. His coalition — it’s really ironic — the coalition that Trump has put together is exactly what the Republican Party has been telling us conservatives they need to do to win.

RUSH: While they have been blowing us off, while they have been lying to us, they’ve been saying, “No, no, we can’t win with just you guys. We need to go out and get these –” Well, Trump’s doing it, and they don’t want any part of it. In the second place, remember Jeb Bush said that he was gonna win the nomination without the base. Guess who’s doing it? Trump.

RUSH: My theories are probably just the same as yours. You know, you’ve got any number of alternatives to Trump.

RUSH: And Cruz is the leading alternative right now.

RUSH: He’s tied at 18% in South Carolina. But he’s outperforming. In every election he outperforms what the polling says. I think Cruz is the — ah, what’s the term? He’s the sleeper out there. It’s Cruz that’s sneaking up on everybody. Everybody’s focusing on Trump.

RUSH: To do what?

CALLER: To wake everybody up, to switch over —

RUSH: Wendy, I think everybody’s awake on our side.

RUSH: This is what you gotta come to terms — everybody’s awake. And there are a lot of people — you’re putting me in a very difficult position here. 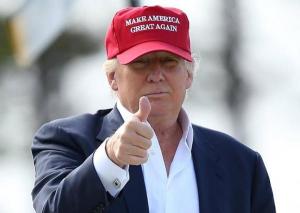 RUSH: No, no, no. I’m not complaining to you. You don’t know, ’cause I don’t wear my blood on my sleeve. You know, I don’t bleed and whine and moan and complain to the audience about things that happen to me because I’m bigger than that. But you would not believe the number of people that are coming at me as though all of this is my fault, that I could have stopped this way back when if I would have just been a leader, if I would have just done this or that.

I’ve got two responsibilities here, folks. I’ve got my responsibility to you, the audience, which I put at number one. My responsibility to this program, my career, my job, not my career, but this is the thing I’ve chosen to do. There are all kinds of people who depend on me doing it and doing it well. That’s my number one focus. I’m not the leader of the conservative movement. I’ve never sought that. I’m not denying any — already right there, “Wait a minute. You mean you’ve been lying to us?” No, I haven’t been lying to you. It’s not my job to get votes for people, damn it! It’s theirs! What more do you want me to do?

RUSH: The best thing I could tell you, folks, I guess, as I assess all this, is this is not an election, with a competition of philosophies. We’re way beyond that. People are not gonna rely on philosophy to accomplish anything. You can have the best philosophy in the world, I don’t care what you call it, and it’s not gonna mean anything if you’re up against somebody who succeeds at making people think he’s gonna break balls, kick butts, take names, put people in prison, fix the country, make the country great again, whatever the hell that means to people. You can philosophize all day long in competition against it, and we’ll see you in the rearview mirror.