The Flaw in the Cruz Campaign

RUSH: Now, I mentioned earlier that I think I detected a flaw in the Cruz strategy last night. And I gotta be very, very careful about this, folks, because none of this is offered in criticism. I’m not offering this from the standpoint of, “You know, these guys don’t know what they’re doing! What they gotta do…” That’s not the attitude that I bring to this. In all of these things, I’m trying to be genuinely helpful. And what I finally saw…

Cruz didn’t do anything different last night than he’s been doing. It’s not that. It’s something clicked for me that hasn’t up until now. Because a lot of conservatives are really puzzled why Ted Cruz isn’t doing better. He is the ideal conservative candidate. He is the modern incarnation of Ronaldus Magnus. And prior to Trump getting in, there were a lot of people who thought this was really going to be the chance to re-stake the Reagan claim in the Republican Party and in the country, for the express purpose of fixing things and improving things for everybody.

He’s not a liar, and he’s not a nasty guy. He’s not. And this thing with Ben Carson? I got so much pique about that (p-i-q-u-e), over the childish way this is being dealt with by everybody. And of course, right in the middle of it you have CNN which did air a tweet from one of their reporters that Carson was leaving the race to go home to Florida and so forth, and Rubio did exactly what Cruz did. But nobody is lumping Rubio in with this supposed attempt to sabotage poor Ben Carson and his voters.

But this “liar” thing has stuck for some reason, and it just flies in the face for me because Ted Cruz is — at least with this current crop of people — the epitome of integrity. And so the idea that he’s your average, ordinary political huckster and liar really does not compute with me. But that’s not the point. That is just another observation. As I was watching Cruz’s acceptance speech last night — as I say, there’s nothing different — something just clicked. I remembered while watching it last night what Cruz’s strategy is and what it was prior to the campaign even beginning, and that means prior to Trump getting in.

RUSH: Now, Ted Cruz’s strategy was very simple. He looked at the 2012 returns and saw four to five million Republicans didn’t vote. The assumption was they were movement conservatives unhappy with Romney.

Perhaps, many of them, evangelicals. 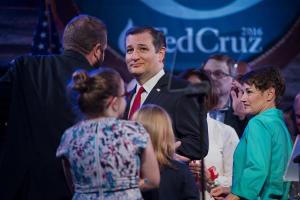 Cruz believes (and his strategy was) that if he could get all four to five million of those with the others that voted for Romney, that he could beat Hillary or anybody else. So I think the Cruz strategy has been to speak in language that appeals to movement conservatives — and really, really committed ideological conservatives — using their terms, using their language, voicing their objectives. Not just saying he’s going to repeal Obamacare but the way he talks about doing it. It’s got a direct appeal.

It’s as though Cruz’s strategy is based and rooted in a belief that if he can attract every conservative Republican, get them to vote, that that will be enough. And I think that that has limited his appeal. He clearly can appeal to a much broader base of voters than just movement conservatives. There’s nothing wrong with trying to get them. But his acceptance last night was pretty… Not word-for-word, but in the key issues that he was mentioning — repealing Obamacare, Supreme Court nominations, all of it — it is language that is a second language to conservatives, but could be a foreign language that’s somewhat scary to people who are not movement conservatives.