RUSH: So here are the three different strategies that are being bandied about on the Republican side, all focused on stopping Trump. Plan A, sit tight, let things go on as they are and don’t try to influence anything. Rubio sinks or swims on his own, Cruz ditto. They hope that Kasich gets out and Carson, nonfactors, get ’em out soon as they can, but other than that, sit on everything and wait for Trump to implode. Wait for Trump to collapse.

Now, before you Trumpists get all mad at me, I’m just telling you what the establishment strategy is. And I can detect it because I listened to ’em talk last night. You know who’s speaking and where they’re coming from you can put two and two together and get four easily. And when you hear these establishment types say, “Well, you know, Trump is underperforming. Well, you know, Trump’s not nearly as far ahead as what he thought it would be. Well, you know, with every one of these victories, Trump is not expanding his momentum.”

Now, very little of that is actually true. But truth is not what any of this is about, just like truth is very rarely about the outcome in court. This is all about perceptions. It’s all about momentum. It’s all about feelings combined with perceptions and so forth. Because there are still a lot of votes to happen. There’s still a lot of states yet to have their primaries. And so creating impressions and mind-sets — and that’s what strategy A is all about. And, believe me, there are a lot of people in the establishment that are still in complete denial.

They still believe that Trump’s not gonna be in Cleveland. They still think that something’s gonna happen, either he is going to cross a threshold that even his supporters will not stick with him on. Or that he’s gonna quit. Something’s gonna happen and he’s gonna realize he’s not gonna win, he’s gonna quit. Or he’s got some other objective that nobody knows and at some point he’s gonna have met that objective and then quit. I mean, it’s silly, but that’s part and parcel of the first part of the three pronged strategy.

Plan B is to clear the field of everybody but Rubio. They do not want to unify behind Cruz. That would be their smartest move, but they will not do that. Plan B is oriented around getting everybody to drop out and then the party unifying behind a guy who has won one state and did not reach the 20% threshold in a couple of states, meaning he didn’t get any delegates in those states last night. That would be Rubio. And Rubio is the desired candidate because that’s where the moneyed people want to go. He’s closer to the establishment, this whole Gang of Eight business.

The third prong of the strategy, keep everybody in so that Trump does not accrue the minimum requirement of 1,237 delegates going into Cleveland. The way that would work is, if that happens, if nobody has 1,237 on the first vote delegates are pledged and pretty much would have to vote the way everybody knows they’re gonna vote because of the primary results. But after that then it’s wide open.

And that point wouldn’t be brokered. Brokered means that powerful people in smoke-filled rooms are denying delegates the right to participate in the process. That wouldn’t be the case. There would be all kinds of horse trading going on and bickering and arguing, Trump included. And if Trump, let’s say he shows up and his 15 or 20 delegates short or 30, he’s gonna say, “I can find those, I can find those, I can get those away from somebody easily.”

But those are the three strategies that the GOP establishment is relying on now. And I don’t know which one they’re gonna decide on. They may decide different factions of all three. And more will become clear as future primaries — there’s another slew of states on Saturday, and then on the 15th of March we have Florida and Ohio. Those are the biggies.

Now, another interesting point about all of this as it relates to delegates, folks, I think after Saturday — I could maybe need to be corrected on this, but at some point very soon all of the remaining primaries are closed, which means Democrats and independents cannot cross over and vote in the Republican primaries. And that is also a factor in the Republican establishment strategy because they are realizing or theorizing that Trump is picking up a lot of votes from leftist, progressive Democrats, liberals, and independents.

They did so in South Carolina, some other states yesterday and last night. But when you get to the closed primaries, one of the examples given of a closed primary is Oklahoma. Oklahoma last night was a closed primary, and Trump lost, so the establishment, “See? See? When it’s just Republicans voting, we can beat Trump.” So they’re realizing on all kinds of hopeful analyses to tell themselves that there are ways to stop Trump here.

RUSH: Now, wait. Before everybody goes and blows a gasket out there, I am gonna be talking about the Cruz victory in Texas and the Cruz victory in Oklahoma. There’s three hours here. So don’t jump to any conclusions. Let me tell you about this closed primary. The next four GOP primaries are closed. There are four of ’em on Saturday, March the 5th. I think it’s 4. Anyway, these four are closed: Kansas, Kentucky, Louisiana, and Maine. And remember the establishment theory. Oklahoma: closed primary. Cruz wins; Trump loses.

The establishment theory is that in closed primaries, Republicans only, Trump will not win. This is what they’re telling themselves. Remember their three-pronged strategy here that they’re scratching their own backs with to try to tell themselves they’re still in this and that they haven’t lost anything and they can still prevent Trump from running away with it.

RUSH: This delegate stuff? I have spent… While doing this program, I’ve spent the last 30 minutes going back and forth with people on the delegate count, and they still can’t make me understand it. And I still don’t know what numbers to give you. The New York Times Nate Silver say one thing, but over here something totally different. Politico’s got another… (interruption) Politico what? (interruption) Same as the New York Times? Well, I hate that the New York Times may have it right. Oh, no. 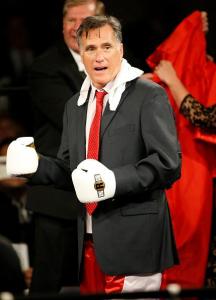 I kid you not. This is an establishment dream. There are some in the Republican Party to whom that is the solution. It boggles the mind. They’re gonna send Romney out there to ring the warning bell? These guys are saying, “We’re all in danger of losing the Republican Party, Rush. Do you realize what’s happening here? The party gonna be blown up if we don’t stop Trump, the party’s over, we gotta stop Trump.”

I watch this, I say, “Well, you guys are the ones that tell your base that they’re not wanted, not needed or whatever. But of all people to send out this warning?” You know, they make this job tough. To describe what they’re doing, you can’t avoid sounding mean, unbelieving, whatever. It’s really hard. Why don’t they send McCain out? Why don’t they send Dole out? Why don’t they send Christine Todd Whitman? Who else have they got? I’m joking. I’m trying to make a point here. It doesn’t matter who they send out. If they send somebody out from the establishment warning we’re about to lose the party everybody’s gonna shout, “No, no, ‘you’ are losing the party, and you may have already lost it. Don’t blame us.”