A Trump Schtick Explainer for “Experts”

RUSH: The Politico today, they can’t believe — could you put yourself in their shoes? Their entire existence they have been besmirching, impugning, and otherwise relegating the Republican Party to insignificant minority status. And yet the most popular, most talked about political figure in the country today is running as a Republican, Donald Trump. And The Politico, another story, this headline: “How Are They Losing to This Guy?”

How are they losing this? “Trump’s opponents are getting beaten by a man who uses election-night press conferences to peddle his brand of steaks and bottled water.”

That’s not what he did last night. That’s what you saw. But that’s not what he did. How do these people continue to miss this? You know, you have to understand, sometimes this stuff gets frustrating. I’ve given these people the answers to every question they’ve had for the last five months. They don’t listen here, and they don’t go to my website and read what I’ve said. They spend their time at Media Matters reading these out-of-context so-called excerpts of what I’ve said or they don’t even do that, they get into their heads that I’m one thing or another and just assume things.

They don’t even know how to watch Trump now. They don’t even know how to see Donald Trump the way people voting for him see him. And not just the people not voting for him, they don’t have the ability to see him the way any American watching that last night on TV sees him. But if your takeaway from Trump’s press conference last night was that it was, A, an attempt to sell Trump steaks or Trump water, you are missing the boat so badly, it’s embarrassing, if that’s what you think that was about last night.

Well, no. Okay, I’ll just tell you. The only reason the Trump steaks and Trump water and the Trump vodka and the Trump wine — by the way, Trump extolled the virtues of his winery. It formerly was owned, 2,600 acres, I think, in Virginia by John Kluge, who was the Metromedia grand pooh-bah. Now, I’ve never had Trump wine, and it may be fine, but he’s saying it’s the finest wine in the world, and I will guarantee you the people at Chateau Obrien, Chateau Latour, Chateau Lafite Rothschild are looking at that and chortling. (laughing)

Who in the world is gonna believe that Trump vinegar is in any way comparable to what they produce in Bordeaux? But he says it and people eat it up. The thing that people don’t get, you have these people like at Politico or anywhere, the Washington establishment party officials, both Democrats and Republicans and they watch this and they wring their hands, and they say, “Oh, my God, oh, this is so embarrassing, oh, this is so bad, oh, oh, this is so offensive.” They do not understand that Trump knows he’s putting everybody on and the trick is that he knows his audience knows. 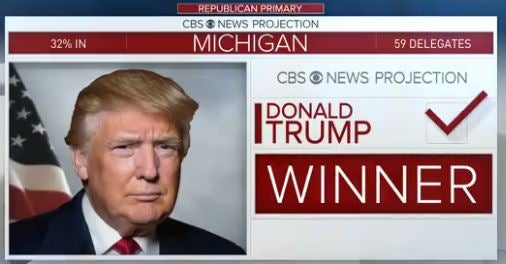 But Trump knows his wine’s not the best in the world, and he knows people know that. He says it anyway, and everybody laughs along with him and they think it’s great and they think it’s marvelous, think it’s cute, whatever they think. But they don’t get offended by it, like Mitt Romney’s getting offended or like somebody else is getting offended. They know that some of the things Trump says, like bringing iPhone production back, they don’t really expect that to happen. Nobody’s electing Trump convinced that iPhones are gonna be made in America and all kinds of new jobs.

The key to that I think is this is the way Trump telegraphs his preferences and his support for people. How many times have I asked people to note — and it happened last night two or three times; it always does. Sometimes they’re fleeting, the moments, sometimes they take 30 seconds. But at least three times in every one of these hour-long either press conferences or speeches, Trump goes all humble. He goes total humility. He thanks everybody, he tells them what an honor it is, and they hear it and they know it.

They recognize the bluster for what it is, and they’re not offended by it. And this is what I think people can’t see. And if they, again, just to illustrate, if they think the point of this thing last night was a cheap sales gimmick to sell Trump steaks, that’s not what he was doing. He wasn’t taking the occasion of this to sell Trump merchandise. If that happens as an ancillary thing, fine. But that was clearly Trump having fun. He’s got Mitt Romney, Mr. Stiff Shirt, Mr. Pointy Shirt, Mr. so-called rock rib whatever out there condemning the way he behaves and condemning his businesses and claiming that they’re losing money, and Trump’s been very open, “Look, you hit me and I’m gonna hit you back and I’m gonna hit you twice as hard as you hit me. And if you accuse me of things that aren’t true I’m gonna come out and show people they’re not true.”

So he’s doubling down on Trump University like he’s doubled down on every criticism there has been. People are saying his steaks suck, that they don’t taste good, that you can’t find ’em, they’re out of business. Well, there they are. They were on stage. I saw ’em last night, and he was giving some samples away, people want ’em. It’s the way he deals with it. And, by the way, he champions the things he believes in, and that draws crowds. 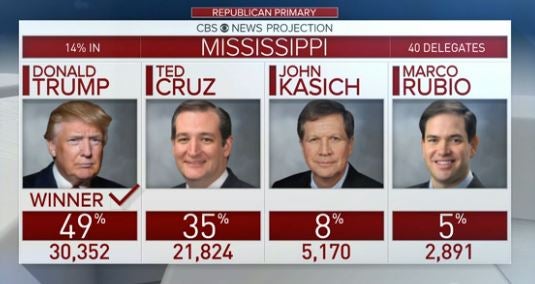 Anyway, moving on to other things. This business about Rubio came up in the last hour. Remember the story, where was this story? Where did it originate? It was a CNN story, was it not? It was a CNN story by Jamie Gangel and one other reporter, I don’t remember the name, and the story was that Marco Rubio supporters, people in his campaign, were suggesting that he get out of the race before the Florida primary next Tuesday to avoid humiliating defeat, to avoid a defeat that could damage his political future. And the story, the report said that Rubio was considering it.

Well, after the story hit, there were denials left and right. The New York Times today headline: “Ted CruzÂ’s Campaign Is Accused of Spreading Rumors of Marco RubioÂ’s Withdrawal.” Oh, really? Are we gonna replay the Ben Carson story here? Isn’t it apparent what we’re doing here now? Ted Cruz had nothing to do with that. Ted Cruz had not a single thing to do with it. (interruption) I don’t care if it doesn’t matter. I’m gonna tell you it does matter, the people out there know it matters and they know this is a BS thing from the New York Times, just like they’ve known all along that what they tried to do with Cruz over this Ben Carson scenario was BS from the get-go.

Here’s how the story starts. It’s by Alan Rappeport. “Senator Ted Cruz is under fire from Senator Marco Rubio’s campaign, which accuses him and his campaign of employing more ‘dirty tricks’ ahead of the Republican caucuses in Hawaii [yesterday] and spreading false rumors that Mr. Rubio is dropping out of the race. Emails that appeared to have come from the Cruz campaign were sent to his supporters in Hawaii promoting a CNN report saying…”

CNN reports that Rubio’s own campaign is advising him to get out and that Rubio’s considering it, so Cruz once again e-mails the CNN report and somehow it’s Ted Cruz spreading rumors! (interruption) Okay, Cruz workers somewhere. But it doesn’t matter. “Cruz workers” equals Cruz. It was like the dirty tricks Cruz campaign. You have a CNN story. You have a full-fledged story, just like we had a CNN tweet over Ben Carson. CNN does a story about Rubio, somebody in his campaign is the single source saying they’re thinking of getting out to avoid humiliation.

So somebody somewhere totem pole Cruz campaign sends the story out to some people in Hawaii, and here we go again. (laughing) “Ted Cruz’s Campaign Is Accused of Spreading Rumors…” This is… (laughing) I don’t know how to describe this! This is so obviously wrong that it is purposeful. It is an attempt… This is the New York Times relying — in their own world, in their own mind — on their irrefutable reputation, their indestructible reputation that whatever they say, “is.” And it’s aimed at low-information people who may not have heard that the CNN report.

But even they include it in here: “Emails that appeared to have come from the Cruz campaign were sent to his supporters in Hawaii promoting a CNN report saying some of Mr. Rubio’s advisers see no path for him to win the Republican presidential nomination, and suggesting that he might leave the race before the March 15 primary in Florida. A spokesman for Mr. Rubio said that report is false. ‘Senator Cruz is up to his dirty tricks again…’ said Joe Pounder, a spokesman for Mr. Rubio.” (laughing)

So the Rubio campaign went running to the New York Times after CNN reports what one of their own staffers said, and the New York Times said, “Hey, we’ll gladly take that story,” and they run it to Ted Cruz is “spreading rumors.” (laughing) I love it. Look, I’m infuriated. Don’t misunderstand. But you just have to laugh at this stuff, it’s so patently ridiculous. And it’s exactly the shape and form the Ben Carson story took as well. Politico: “GOP Establishment Creeps Toward Cruz — ‘Ted is the only possibility to stop Trump,’ says a Bush loyalist,” unnamed. … 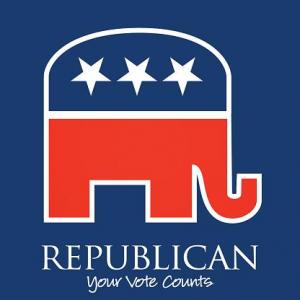 “Panicked at Donald TrumpÂ’s dominance and dismayed by RubioÂ’s continued inability to do anything about it, some top Republican power brokers are turning to Cruz, putting aside their policy and personal misgivings to back the candidate they now openly label as their best hope to stop TrumpÂ’s GOP takeover. ‘He seems to be the only guy who’s got some momentum, and is probably the best situated if there is anybody out there to beat Trump,’ said Austin Barbour, a prominent Mississippi-based GOP operative.”

RUSH: No, no, that’s my point. Trump does not think he’s the second most presidential guy since Lincoln, just like he doesn’t think The Art of the Deal is the second best book to the Bible. He’s putting people on when he says that and his audience knows it and they’re chuckling, but the offended think he’s serious and get outraged over it, and that’s why everybody’s laughing at it.