RUSH: Okay, we’re back with Carolyn in Harrisburg. Carolyn, look, I know you’re for Trump.

RUSH: I’m perfectly fine with the fact you’re for Trump, but you can’t… If you know that Cruz is smart, you have to know he was trying some —

RUSH: Let me explain this to you.

RUSH: You feel free to disagree. Cruz desperately wants to win the nomination. He is close to Trump, but he’s still distant. He’s a hundred delegates behind and it looks dicey. Now, these guys know that it’s impossible to win here by criticizing Trump. That just doesn’t work. It drives supporters to Trump. They’ve learned that. That’s why there was kid gloves last night in the debate. And Cruz is walking back what he said. He knows it didn’t come out the way he intended it.

Because the context in which Trump said it, it was after Nevada, and Trump was reacting to the fact that he won every demographic group. He won from every income. He won every gender. He won every age-group. He won every race, ethnicity. He won different education levels. He won the group of people that do not have even a high school diploma. And he said afterwards, “I love the uneducated.” And Trump was being complimentary. He was expressing gratitude. This is where I think people miss him.

RUSH: He was expressing gratitude for all those who support him. He was not putting them down.

RUSH: I don’t know that Cruz knew that context, and I think all he heard Trump say is, “I love the uneducated,” and he’s might be afraid that Trump is trying to fool those people and pull the wool over their eyes, and he was trying to warn them. That’s the best I can come up with. But I don’t think —

CALLER: No, I don’t think he thinks I’m an idiot, but I think he has no idea of the world that I live in. And, you know, it was not this debate. It was the last debate when Ted Cruz said that he stuck up for the fight against Obamacare. And Donald Trump responded that, yeah, well, you know, you gave a speech. What good did that do? And he’s absolutely right. He needs somebody that is going to do what they need to do. To get conservative laws passed and get rid of the regulations.

RUSH: Well, now, wait a minute. Wait, wait, wait, now. He stood up and made a speech in the Senate. Ted Cruz was trying to alert the American people that it was a backfiring.

RUSH: He was trying to convince other voters to vote again. That’s how you do it when you’re in the minority and you are opposed to something. That’s about what you have to do. But he did more than make speeches; he was fighting them in their votes at the various committee hearings and so forth. There weren’t many on Obamacare, frankly, but —

CALLER: But, again, Rush. In the real world, you have to find a way to work with people, not just to cave in. You win, but by just fighting people and having everybody dislike you, it’s not the way to get what you want. And I feel that Trump has an understanding for that. And I think his understanding of the regulatory jungle we’re all living in and… You know?

RUSH: All right. I’m not gonna try to talk you out of it, and that’s not what I’m doing now. I would only ask you, you said at the beginning of the call that Ted Cruz does not understand your life.

RUSH: Meaning he doesn’t understand what you through daily economically —

RUSH: — the other pressures that you face in small business.

CALLER: My husband is a physician. We have a small, private medical practice, and it’s impossible to survive with the regulatory framework of medicine. It costs more to process the Medicare claims that you get from Medicare. So we dropped Medicare.

RUSH: Carolyn, understand I’m not trying to change your mind, but you’re forcing my hand here. Ted Cruz knows exactly that. This is why he opposes Obamacare. It is why he wants to rip it apart and start over. He knows precisely what’s being done to people like you because of everything Obama and the Democrats are doing. Now, just one more question I want to ask you.

RUSH: Did you watch the debate last night? 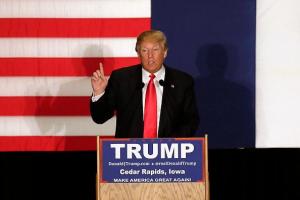 CALLER: I did not.

RUSH: Oh. Well, then I can’t ask you the question.

CALLER: I missed it because I’m really kind of tired of ’em.

RUSH: Yeah. So’s Trump. Trump said, “I thought these things were over with,” and he said, “We do how many of these? Why are we doing more of these? It’s over with, right?”

CALLER: And Rush, let me ask you. Do you think if Ted Cruz were to win, do you think he would be able to fix Obamacare?

RUSH: I think if Ted Cruz were to win, we would get the most focused, organized, smartest effort at unraveling it we could get. I think that there’s no question in my mind that he means what he says. Your question is one of competence. You’re asking, “Does he know how to do it?” You think Trump does, because he’s got so many successes in business, and because of the people he knows, that he’s gonna be able to go in there is and just rip it apart and start over and put it back together. Somehow you don’t think —

CALLER: I think he’s gonna talk to the right people, people who understand health care. And I just think he’s the better… I think he is a proven leader, and what we need is leadership right now.

RUSH: Right. Okay. Well, look, Carolyn, I appreciate the call. Thank you. Thank you much. It doesn’t fit the profile of the average Trump voter that I think many people think of. It’s a medical family. Her husband is a physician out there.