A Cruz Supporter on Trump Excitement

RUSH: You know, I watched all the coverage last night. It was my job. I’m still amazed at the number of people that apparently do not understand the basic Trump supporter. It’s amazing to me how many people trying to figure it out insult those people as a means of trying to explain to themselves how Trump is doing it. It isn’t hard to understand this. To me, anyway. And you have heard me explain it. I’ve spend hours doing it. Maybe just a couple more things to try to convince people, but it may be a lost cause anyway, ’cause I don’t think they want to understand.

But we stick with the phones. Matt in Lincoln, Nebraska. Welcome, sir. It’s great to have you here.

CALLER: Thanks, Rush. Hey, my point I wanted to make is if you look at the excitement factor with Donald Trump — now, I’m a Ted Cruz supporter, all right?

CALLER: But when you look at the excitement factor with Donald Trump it looks like 2007 with Barack Obama. And everybody who’s coming to the polls, I mean, it’s just incredible. And then you look at the Democrats. Their poll numbers are down, way down. There’s no excitement there. And Donald Trump’s got all this excitement. Now, the difference between Obama in ’07 and Donald Trump now is that the media created Obama, where Washington, the dislike for Washington has created Donald Trump. And just as where the media would allow anything to go with Barack Obama —

RUSH: Wait, wait, wait, wait. You’re close. You’re on to something here. One thing. I think Trump made himself. I don’t think Washington dislike — Washington dislike buttresses support, but Trump — see, this is why they can’t touch him. Trump has been all over American media for years. They’ve seen him interact with Omarosa. They know Omarosa loves him. They know women that he works with love him. They don’t believe all this crap that he doesn’t like women. They’ve seen how he reacts with people on these TV shows.

Donald Trump has been all over American media for 30 years, and so all these efforts to portray — it doesn’t work. You’re right, the media made Obama. They did not make Trump. Now, they might be adding to Trump’s allure by trying to destroy him, but I don’t think you can say the media made him by virtue of their sliming him.

CALLER: What they’ve done is they’ve made the people that have followed him, because the people are so upset. And just like they always give Obama a pass, you know —

RUSH: Back here to Matt in Lincoln, Nebraska, who wasn’t quite finished. You were talking about all of the excitement surrounding the — you’re a Cruz guy, you’re a Cruz supporter, but you compared the excitement to the Trump campaign to the Obama campaign. And you were suggesting that part of Trump’s allure is the media constantly harping on him just glues his supporters to him even tighter, right?

CALLER: Right. And, you know, when Obama ran we had all these negative (unintelligible) about Obama but the media would just give him a pass. But people are so upset with how the media’s tried to dictate everything in our lives and tell us what is good news, bad news, that nobody cares, nobody cares what they have to say about Trump. And, you know, the disheartening thing about this with the establishment is that if you remember, as you would remember, Rush, Bill Clinton never got 50% of the vote when he ran for president. He got 42 in the first run, 49 in his second run. And Hillary is not even a fraction as popular as Bill Clinton. She needs a third party. And she needs a contested convention. Otherwise she cannot win. And then we end up with Screech as president, if we have a third party.

RUSH: Good point. I’m gonna get there. Because if things happen the way people promise, then Hillary’s gonna get her third-party candidate. And I’ll get —

RUSH: — to that in a minute. But I want you to tell me, I’m curious, you’re a Cruz guy, but you’ve acknowledged all this excitement around Trump, and I imagine you think this excitement’s infectious. I mean, you think the excitement itself is drawing people to Trump. What is it about Cruz? Why are you a Cruz guy?

CALLER: Well, you know, I had the privilege of meeting Cruz, ironically, a couple years ago at the Mar-a-Lago club with Donald Trump and Ben Carson. And, you know, I had a brief conversation with him, and he was very complimentary of one of our senators from our state, Deb Fischer, and but just, you know, anything I asked him, he just right out, you know, would answer.

CALLER: Yeah, he just was the real deal. Not that Trump wasn’t that way. Trump was very engaging when I met him. He was extremely generous with the people around him. He never pushed anybody away, never refused somebody taking a picture with him, nothing.

RUSH: Well, no, but you’re talking about policy, ideology. I mean, you have no doubt that Cruz is gonna be true to his pledges, true to his commitments, because you know he’s —

CALLER: Absolutely. Ideology, Cruz is where I fall in line with.

RUSH: And you, because of that, Cruz is your guy, and you think Cruz actually could make the changes necessary to reverse the direction the country’s going?

CALLER: I don’t know if anybody, honestly, could, but I think that he’s one person I trust in that office — 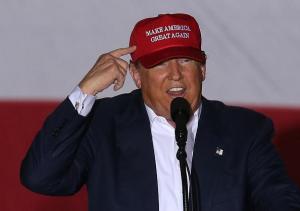 RUSH: He’s not going to get out of it.

CALLER: Right. But it’d be nice if they could just sit there and let these two go at it. Now, unlike a lot of people that I’ve heard from in this state, including a senator, if Trump is the nominee, I’m voting for Trump. Who wants Screech in there? Who wants somebody that’s gonna sit there and change the complete balance of our courts to something that is going to change — they already changed what the Constitution means, and it’s just gonna get continually worse if we sit there and we allow Screech in there.

RUSH: Well, thanks for the call, Matt. I appreciate it.