RUSH: Yeah, yeah. I don’t know what it means, I mean, if it has any lasting impact. You don’t know about early impressions and how long they last, but the contrast in Hillary Clinton’s speech last night, you know where she was? She was over in West Palm Beach somewhere. Yeah, she was. I actually think that she was somewhere down in Lake Worth. They call it West Palm Beach. It might have been. But she was here, and, of course, Trump was out at Mar-a-Lago.

By the way, greetings and welcome back, folks. A delight to have you here. Greatest thing in my day is to have everybody here and doing this. I can’t tell you how much I appreciate that you’re there and having the chance each day to do this. 800-282-2882. And we’re going to the phones soon in this hour. A great roster of people that want to weigh in here. 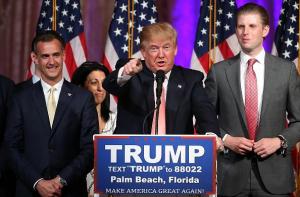 I mean, Trump, obviously we had a different Trump last night. No press conference, no braggadocio — well, not much. There was a lot of bombast. I mean, the biggest thing he did last night was put Lewandowski up there and give him a shout-out which basically said to Trumpbart up — whatever, Breitbart — did I say “Trumpbart”? (laughing) I did not mean to do that. Which basically said to Breitbart — well, there are other critics, though, not just Breitbart. Well, Breitbart actually didn’t criticize. That’s the problem. Anyway, that was a big deal, putting Lewandowski, because the Drive-Bys have been asking for Lewandowski’s scalp. There’s not much of a scalp there; it’s a buzz cut. They’ve been asking for his scalp, and Trump said (imitating Trump), “Yeah, you want me to get rid of my guy? Well, here. My guy is standing right beside me with a shout-out tonight, so screw you.” That was said in pictures. He didn’t say anything to anybody. He did his usual “the press is disgusting,” but you laugh at that. The media doesn’t, but I do.

But his speech was confident, it was joyful. He was happy. He was having a good time. He was at home. He was in his surroundings. Hillary Clinton was miserable. She was mad, she seemed mad. She came close to sounding like that screeching sound bite we have (imitating Hillary), “And they can’t tell us that we can’t say what we want because might not, ar, ar, ar, ar, take out the trash, ar, ar, ar, ar, ar,” whatever it is she’s shouting, that’s what it sounded like last night.

So the face of the Democrat Party now is Hillary Clinton and Debbie “Blabbermouth” Schultz. But Hillary, the contrast in those two speeches last night was profoundly different. Hillary did not look like she was happy. She didn’t look like she’s won anything. She didn’t look like she was celebrating any kind of a victory. And these people, they have been running the show for seven years, and even a victory speech is a litany of complaints about the country, the unfairness, the discrimination, the racism, the bigotry, the inequality. And they’ve been running the show for seven years.

She was at the convention center over — is that where that was? Okay. Well, then they had a deal a Lake Worth earlier ’cause I know they are down at Lake Worth. I saw that. So she was at the convention center. It was striking to me. Now, as I say, I don’t know if impressions made last night last from here to November, you just never know, but that was nothing to make any commercials out of as far as the Democrats are concerned. (interruption) Has Hillary ever looked — well, she smiles now and then, but I get your point; they’re always mad.