RUSH: Well, here’s a shocking headline, folks: “Kasich Rules Out Vice President Role, is Open to Dem Running Mate.” The story’s from the Washington Examiner. “Ohio Gov. John Kasich said he isn’t willing to serve as anyone’s vice president, but he indicated party affiliation would not matter to him when choosing his own running mate. After losing the Arizona primary and trailing a candidate who is no longer running for president, Kasich hit –” Do you realize Kasich came in, Arizona had early voting, if you look, Rubio and Jeb got more votes than Kasich got. Kasich’s still running and they’re not, and that’s what this means.

“After losing the Arizona primary and trailing a candidate who is no longer running for president, Kasich hit the campaign trail in Wisconsin and told voters only he could beat the Democrats in November. He ruled out the possibility of serving with any GOP nominee.” He’s not gonna be Trump’s veep. He wouldn’t be Cruz’s veep, but that doesn’t mean that he would oppose putting a Democrat on the ticket as his vice president.

And then he said that he would be open to putting a Democrat on the ticket as his VP if he gets the nomination. “Just because someone happens to be a Democrat doesn’t mean they’re disqualified.” (ripping up story) Kasich-Sanders, Kasich-Biden, Kasich-Hillary. Yeah, that’s what he’s saying.

RUSH: Jim in Joliet, Illinois. Hi. You’re next. Great to have you here.

RUSH: Thank you. I appreciate it very much.

CALLER: Sorry, I’m a little — very upset right now. What you told me about John Kasich and him willing to take on a Democrat vice president, just shows he’s just a baked potato-headed spoiler. I’ve known it from the beginning, and my family is busting their rear end to try and keep my kids in a great school district.

CALLER: We moved to a rental property to put them in a 10-out-of-10 school district. My children, my eight-year-old and my 11-year-old today, both of them today should be giving PowerPoint presentations. My son’s eight years old, giving a 26-page PowerPoint presentation. My daughter giving a PowerPoint presentation on the Civil War today. And then to have that joy pulled out from under me by hearing you tell me that John Kasich is going that far? It… I’m sorry, I’m so livid. I’m just absolutely livid.

RUSH: I understand! And here’s the thing about Kasich. You know the people that say… Governor Christie was one of these to say that he was the guy. McCain was one of these guys. (impression) “I’m the guy! I can cross the aisle! I’m the guy that can reach out to the other side. I’m the guy! I’m guy can cooperate with Democrats. I’m the guy who can show how Washington works. I’m… I’m… I’m the guy who if they have a good idea or whatever, I’m not gonna reject it just ’cause it’s from them. I’m gonna make Washington work,” and this is the last thing we want.

I mean, those people… You, me, everybody else thinks those people are the architects of the disaster that is happening all across the country. We don’t want to work with those people. We want to defeat them politically, and here comes Kasich! It’s all about him. That whole thing, saying that he would be way open to choosing a Democrat? Kasich is taking the occasion here to try to sell himself as something unique and special. It really has. This has gone to his head. I really believe the whole thing has. When I saw the confetti…

When he shot confetti at himself after winning his own state, the Ohio primary, and then started talking about what a remarkable story his story is and looking at people and saying, “Do you realize what I have done?” This is somebody that’s lost in themselves and is really… He thinks that he is establishing himself as a cut way above any of these other Republicans. He will not dare utter a negative word about Democrats. (impression) “Because they’re people, too! And it’s about loving people. It’s about working with people! You get people! You get the school board people! 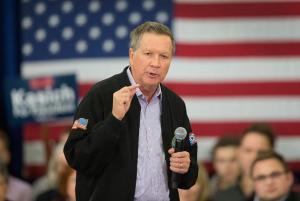 “You get the school board. I’ve done it! I’ve done it in Ohio. We’ve got utopia in Ohio and I’ve done it! You get the school board people together and you say, ‘Get in there and fix it,’ and I go in there with ’em and we get it fixed! And it can be done! I did it; I know how to do it. The Democrats are not bad people. The Republicans are not bad. We’re all in it. Can we give each other a hug?” He’s trying to own that as, you know, the one reasonable guy. I don’t know what it is, but at this point to say, “I’d be more than happy to run with a Democrat.

“But I wouldn’t stoop, I wouldn’t lower myself to be vice president! Are you kidding? John Kasich, from McKees Rocks, the son of a mailman, vice president? After this remarkable story about me? You think I would settle for that? You got another think coming. After what I’ve done in Ohio, vice president? Are you serious? But I’d be happy to run with a Democrat! So I understand how you heard that, Jim. In fact, I’m sorry for piling on her in explaining it to you, but you should feel proud over your kids’ achievements. You’re doing the right thing. Keep it up.