RUSH: I want to take you back, turn back the hands of time, not quite to the Grooveyard of Forgotten Sound Bites because this is not that old. It was just six days ago on this program, in discussing the Republican presidential race and what the establishment might do, who they might turn to, how they might do it, who might the nominee end up being, I warned.

RUSH ARCHIVE: I’ll give you just a list of names as an example. Ryan, Walker, Romney, Jeb. If you start seeing in the media news stories that are essentially puff piece profiles, if you start seeing news stories about what has Jeb been doing since he got out, and how is Jeb reacting to it, and what’s Jeb planning for his future. Or about Scott Walker, or about Ryan, if you see news stories where there is an attempt to build the case for somebody and you wonder, “What’s this about?” They’re floating possibilities.

This is where you read between the lines and you figure out what they’re trying to pull off. And that’s how you can identify if there is somebody that they have singled out that they do want to nominate in a contested convention, just watch and see which Republican establishment types are getting a lot of news coverage, the kind of coverage that would serve the purpose of establishing a reputation, establishing qualifications, establishing a sense of purpose. Yes, they might not have made it throughout the primaries, but has learned a lot and has stayed involved, is closely watching events and wants to do anything possible to help the party.

RUSH: And I was simply asking and advising people to keep a sharp eye, because there’s still a considerable body of thought that — and there’s two schools on this — that the establishment is going to try to come up with the Karl Rove, quote, unquote, fresh face. I don’t think anybody should doubt that. It looks like a long shot.

I mean, the common-sense analysis would be that the Republican nominee is gonna be Cruz or Trump. Let me rephrase that. Trump or Cruz. I’ll go in the order in which they stand now with delegates. Because the only possibility of anybody getting to 1,237 is one of those two. So the conventional wisdom has it’s gotta be one of those two and eventually at some point everybody in the party is going to accept that.

Then you have the establishment, actual establishment official Republicans throughout who I have no doubt will be trying, however dismal the opportunity they will be trying. So I was just warning if you want to spot possibilities, just keep a sharp eye on names that seemingly have been eliminated, that nobody would ever think, in the current context, is a nominee, start seeing their names all over the place, it could be an indication that the PR effort has begun.

So interestingly, yesterday at 3:15, 15 minutes after this program ended, Paul Ryan went out with the fourth or fifth time now that he had said he is not seeking the nomination, and he doesn’t want the nomination. Cynics, of which I am not one, cynics have pointed out this is exactly what Ryan did before he became Speaker. He repeatedly denied that he wanted to be Speaker. He knew that there were many Republicans who wanted him to be, so he made them want him even more by telling everybody he didn’t want it. So people are wondering if the same strategy has been implemented at this time for a possible presidential draft. Here is Ryan yesterday afternoon at the Republican National Committee building.

RYAN: Let me be clear. I do not want nor will I accept the nomination for our party. So let me speak directly to the delegates on this. If no candidate has a majority on the first ballot, I believe that you should only choose from a person who has actually participated in the primary. Count me out. I simply believe that if you want to be the nominee for our party, to be the president, you should actually run for it.

RUSH: All right, now, a cynic could also say that he didn’t address the possibility of a hung convention, so to speak, and a bunch of people begging him to do it. He tried, I think, to imply that that would be the case. But a lot of people think the jury is still out on this. And the reason they do, folks, is because they understand the establishment, who they are and how tightly they have control over the apparatus and how difficult it’s gonna be for them to let go and have either one of these two guys, Trump or Cruz, be the nominee. ‘Cause I pointed out yesterday — you know, so many things are different.

In a normal primary, the nominee is chosen by virtue of primary elections months before the convention. Romney tied it up, wrapped it up in late May in 2012 and the convention in 2012 was late, wasn’t it? It seems like it was August sometime. Might have been July. But in most cases, like in 2008, McCain had the nomination wrapped up in February or March, which is why we did Operation Chaos.

So the point is people don’t see the delegate selection process. They don’t see the transfer of power from party head, chairman of the committee, to the nominee. It just evolves and just happens. In, for example, a normal year — by “normal,” I mean, where your nominee is chosen by virtue of primaries and wraps it up early. The nominee becomes the titular head of the party, and the nominee runs the convention. The nominee selects people to sit on the rules committee, and all of the rules that get changed or made, written at the convention, are written under the guiuse of leadership of the nominee.

The nominee chooses who speaks and on what night do they speak, and on what subject do they speak, and in what order do they speak. And the speeches have to be vetted by the nominee and his circle of advisors, of course. Go back to 1992, Pat Buchanan, as you know, had sought the Republican nomination and I think even might have won the New Hampshire primary in 1992. But George H. W. Bush was the nominee and granted Buchanan a speaking slot in prime time on Tuesday night of the convention. It was in Houston. It was at the Astrodome. And it was in that speech that Buchanan unloaded on his comments about the culture war. And he unloaded on the political aspects of the militant leftist gay community, for example.

There was nothing else like that at that convention. And the Bush people were criticized afterwards for granting Buchanan that time and giving him that slot in prime time and for not vetting the contents of his speech enough. And they figured out that they actually blew it. They allowed Buchanan to have the time. They knew what Buchanan was gonna say, and they thought having him go Tuesday night people would forget it by the time Bush was officially nominated and gave his speech on Thursday.

But nobody forget it because it was the only thing at that convention that was really raucous and had people wired up because we’re coming off the “no new taxes, read my lips” pledge that had been violated. So Buchanan was the only thing that was electric, and it’s what people did remember. So the establishment back then were fit to be tied. But the point is Buchanan only spoke because the nominee, George H. W. Bush, relented and agreed.

In this convention, what’s gonna happen, if we don’t have a nominee before the convention, who runs it? Who schedules the speakers, who gets to speak, who puts them in order, who sits on the rules committee, this is what’s different this year. The sausage making process is happening right out in the open; everybody sees it. In a usual year, a normal year this never is seen because most of it’s not even necessary.

The nominee becomes the head of the party. And in some cases, even if the nominee goes on to lose the race for the White House, the nominee is still the power broker of the party until there is, in some cases, another nominee. The guy may slink away and not do much, but his people have still been installed at leadership positions in the party; and, you know, whoever runs the Republican National Committee is gonna be somebody that’s close to the nominee.

None of that is really going to be a factor here. So in lieu of the nominee essentially running the convention, the party is going to this year, i.e., the establishment. And that’s why I don’t think anybody should think for a moment that these people are just gonna sit idly by and not give it the old college try to get somebody from their club as the nominee. It could be dramatic. And I could be wrong. It could be that the party will see that, “Hey, look, it’s gotta be Cruz or Trump. We can’t just disenfranchise either one of these guys and their voters. That’s just instant death.” 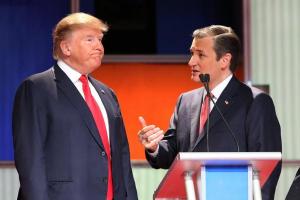 But there’s some people in the party, remember, who would be perfectly fine with that. And they have publicly said they’d be perfectly fine with Hillary winning if it meant the party remaining in control of people who run it at present. There’s a little story here that ran in CNN. “Republican Leadership Advising Members to Skip Cleveland — A number of high-profile Republicans, fearful of a potential melee in Cleveland this summer, are considering skipping the Republican National Convention and campaigning back home instead.”

Have you ever heard of this? I’ll give you some names. “With the presidential campaign hitting a fever pitch and Donald Trump warning about riots if he’s denied the nomination, some House and Senate Republicans tell CNN that it makes more sense to spend time with voters back home rather than be associated with the drama engulfing their party.”

You talk about a mistake. This may be the first party convention in years that people actually tune into and want to watch it gavel to gavel. And to not be there in the mix, to be back home with the voters? CNN says, “But even some leading party stalwarts are planning to skip the convention. Asked Tuesday if he’d attend the convention, former Florida Gov. Jeb Bush told CNN: ‘No.’ ‘Unlikely,’ GOP Sen. Kelly Ayotte said when asked if she’d be in Cleveland in the midst of her tough bid for a second term. ‘I’ve got a lot of work to do in New Hampshire, I have my own re-election and I’m going to be focusing on my voters in New Hampshire.'” I don’t think I’m gonna go to Cleveland.

“The decision underscores the dilemma confronting Republicans in being tied too closely to the top of the ticket — particularly incumbents from swing states worried that Trump’s divisive candidacy and Ted Cruz’s rigid brand of conservatism will doom their chances at keeping power in both chambers of Congress.”