Trump’s Back to Being Trump Again

RUSH: Trump was just rocking it, by the way, in Rhode Island. He’s back on his roll. Trump, I think, was off on a tangent, is the best way to put it, for a month or so, maybe three weeks, but now Trump’s got the old energy, the old firebrand, the old raconteur personality back. Amidst all this talk that they’re gonna make him presidential, he’s going back to the way he was. He’s fighting that so-called image makeover, and he’s the Trump that everybody was falling in love with at the outset of this. I mean, he was just on fire in Rhode Island a moment ago.

RUSH: Folks, I’m sorry. I can’t let that go by! Am I just supposed to sit here and ignore that? I am, aren’t I? I’m not supposed to… (laughing) I’m not supposed to react to that. There is no criminal enterprise here! (laughing) Gee! Ah, but then, you know, the Trump acolytes are gonna be out there full speed ahead on this meme now. “Oh, yeah! Do you see Kasich and Cruz? They’re cheating! They’re colluding. It’s like Wall Street. If you collude in the stock market; they put you in jail, but not in politics!” (laughing) Colluding! (laughing) I guess you can never cosponsor legislation ever again because you’re colluding. That means…

RUSH: And it wasn’t finished. Once you step into it with Trump, you had better be prepared to be swallowed, ’cause that’s what’s gonna happen to you. Here we go again…

TRUMP: Now you look at Kasich. I don’t think he knows what… You know, did you see him? He has a news conference all the time when he’s eating. I have never seen —

TRUMP: — a human being eat in such disgusting fashion. I’m always telling my young son, Barron.

TRUMP: I’m saying — and I always with my kids… All of them, I’d say, “Children, small, little bites. Small.” This guy takes a pancake and he’s shoving it in his mouth.

TRUMP: He’s like… It’s disgusting. Do you want that for your president?

AUDIENCE: (shouting in the negative)

TRUMP: I don’t think so!

RUSH: “No!” (laughing) Did I not tell you, though? Did not even your humble servant, El Rushbo, notice the way Kasich was eating? You just don’t do that. Trump’s right. I didn’t know if it was half of an omelet or half of a pancake, but he was shoveling it in there — all the while berating a reporter. And little bits of food were spittling out of his mouth when he was talking to them. I said, “I can’t believe this,” but I actually saw it. And, as you know, Cruz has been running around saying that Donald Trump is scared. So you know that Trump, at some point, is gonna react to that. 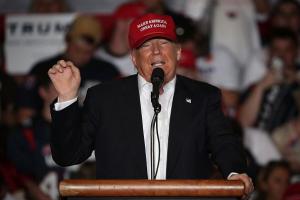 TRUMP: He’s now in third place. But I heard Cruz say this. (impression) “I want to debate Donald Trump. Donald Trump is afraid to debate me! He is afraid.” You know, with the hands. Ay-yi-yi.

TRUMP: So dramatic. So dramatic. You know the truth? I heard he was a good debater in college, and you know what? He might be. But in college, they don’t interrupt you every 15 words like I do with him.

Folks, there’s other stuff in the news out there besides all of this. I try not to get too far behind.

Yeah, yeah, yeah, that’s right, the knife and fork eating the pizza slice, Kasich, knife and fork, pizza slice, and then shoveling this — really. It was… you just don’t do it. I mean, you don’t do it any time, but you don’t do it in politics. You never, ever see a serious politician eating. Even at a banquet, you don’t see ’em eat. They eat before or after, but never at the event. You don’t have time anyway. You’re posing for pictures, you’re giving a speech, you’re signing autographs, whatever you do, don’t have time to eat. But, you know what, let me take a break here.

We got some great people lined up on the phones, they’ve been waiting for quite a while, and this Stack of Stuff is gonna remain the Stack the Stack, but there’s a couple things. Let me give you the headline: “The Green War Against the Working Class.” This is from the Heritage Foundation. It’s a great, great Stephen Moore piece. It’s about green energy and the havoc it’s causing just throughout the mainstream of our culture.