RUSH: We’ve got a guy from Coronado, California, who was actually at the Trump rally in Costa Mesa, which is where all the rioters were. This is Bob. Bob, it’s great to have you call. I’m glad you got through today. How are you?

CALLER: Oh, good, thank you. I was just gonna give you my observations for both inside the rally and outside the rally. You know, inside it was electrifying. I’ve been to many NFL playoff games and so forth. This was beyond anything I’ve —

CALLER: I’m telling you, this guy… You know, what you said before is, “It doesn’t matter what somebody says to you when you hear ’em. It’s how they make you feel.”

CALLER: I mean, he has that mastered — and, you know, I’ll admit it: I’m a Trumpster. But, you know, he does an amazing job of saying some kind of off-the-wall stuff. But, you know, we kind of look at each other and smile, you know, like, “Wow. He said that.”

RUSH: Don’t misunderstand. I know they’re electric. I know they’re huge. I know they’re exciting. People are lined up for — in some cases — miles to get into these things, and it’s been the case throughout the camp. I’m not denying that. By the way, the phrase is an old actor’s instruction, and it is that nobody will remember what you say but everybody will remember how you make them feel. And that is, I think, very close to what’s happening here with Trump. What it means is, they’ll love what you say when they hear it but it’s not that memorable unless it’s profound, and you can’t be profound for an hour and a half. Nobody can. But the way you feel about it… I guess you’re being honest. It’s as big a deal as an NFL playoff game to you.

CALLER: Yes. Just wanted to mention this: Outside the rally, I was there pretty early, so I saw some of the bad guys lining up, you know, and I kind of wanted to observe some of that. But, you know, this isn’t like a college, you know, an eco-rally or something where you see some ponytail professors and, you know, people that are peaceful but kind of crazy. These are some… These appeared to me — and of course I’m profiling, but they look like bad guys. I’m telling you, it looked more like a prison yard than it did like a college campus.

RUSH: Now, that might be profiling. But to call ’em bad guys is not profiling. So they’re kind of running around carrying the Mexican flag. I think they’re bought and paid for by people like George Soros and other donors to the Democrat Party. It’s the same thing up in San Francisco. You know, Trump had to walk into the back of the hotel where the convention was being held to make a speech. You know, and the protestors were out front, and they thought they had succeeded in intimidating Trump keeping him away.

Because his caravan turned around and left and went some other direction, Trump got out and just walked in back. He had his phalanx of Secret Service, he just walked in, and the same thing at the airport. He had to do that to get into his airplane. He just walked in fearlessly, unafraid. But the protesters were livid. They thought they’d succeeded in keeping him out. This is who they are. Now, that is genuine and real. This is what the Tea Party was accused of being back in 2010, 2011, 2012, and that’s who these people really are. 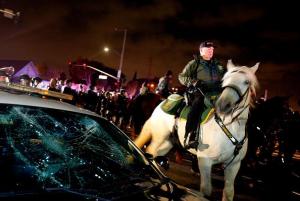 In fact, the LA Times had a story. They’re worried about the “unintended consequences” of all the Mexican flags at the anti-Trump protest. “Hundreds of demonstrators filled the street outside the Orange County amphitheater where Donald Trump held a rally Thursday night, stomping on cars, hurling rocks at motorists and forcefully declaring their opposition to the Republican presidential candidate. Traffic came to a halt as a boisterous crowd walked in the roadway, some waving American and Mexican flags.”

And the LA Times goes on to wring their hands over that. Ooh, that could backfire, and that means the Times likes Trump being protest. Hey, wait a minute, all those Mexican flags and the prison yard look to this? It’s gonna that’s gonna probably end up helping Trump. They’re all worried about it. And we had our eyewitness, Bob in Coronado.