The Silent Majority Isn’t So Silent

CALLER: Mr. Limbaugh, what an honor it is to speak to the leader of the conservative movement, sir, and my professor in the political system for the last 15 years. I’m very well educated.

CALLER: Thank you very much for taking my call.

RUSH: That’s very nice of you to say. I appreciate that.

CALLER: I got one statement and then I got one quick question.

CALLER: My statement is, since Obama has been such a destructive force to our American culture and pride, I think he’s done one great thing, and he has awoken the silent majority. Just as it was awoke when Carter lost in a landslide defeat to Reagan, I feel that in this next election Hillary will go down in a landslide defeat to either Cruz or Trump, and I have no doubt about it, sir. Now, my question to you is, if you don’t mind?

CALLER: Professor, my question is to you: Do you think Ted Cruz would be greater for this country if he were our president or our next Supreme Court justice?

RUSH: You’re asking a valuable question. Would Cruz be of greater value as a Supreme Court justice or president of the United States?

RUSH: Well, gee, that’s a good question, actually. I think either one, and the country would benefit tremendously. On the court, Cruz would be there for the rest of his life, and there wouldn’t be anything wrong with that. Presidents serve four years, eight years, whatever it turns out to be. Either one of those options, you know, in this… I wouldn’t rule anyone out. I wouldn’t — and I know it’s a trick question. As host for 26 years, as you pointed out, I recognized all the tricks that callers try to get me to pinpoint what I don’t want say otherwise.

“Hey, hey, you see what Rush actually said there?”

But I’m just gonna answer that either one of those options would be fabulous. I really do. About the silent majority thing that you brought up, Mark, it’s not so silent right now. I mean, it is raucous. It is loud, and it is obviously large. You said you think that Obama’s responsible for awakening it. Look, folks, I think that’s totally true. If I may briefly go back to the thing I opened the program with today, which was the White House Correspondents Dinner. If you look at why Obama was voted for by a lot of white people, it had nothing to do with policy and had nothing to do with hope and change or any of that. 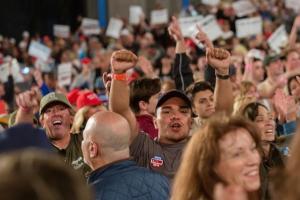 It was all race. It was people so hoping that the election of an African-American would put a dent in the racial strife and start to heal because of what it would demonstrate. I mean, how could anybody think this is a racist country after a black man’s elected. And in association with — in addition to — that, there was hope that Obama would actually improve life for American minorities. I’m sure a lot of white people that voted for him were desperately hoping that would happen.

And I don’t mean by expanding the welfare state. I don’t mean by expanding government services. But literally, genuinely improving life circumstances for minorities. Because the fact is that most Americans desperately want that to happen. And they were hoping that Obama would provide the leadership, the inspiration — and it’s been just the exact opposite. It has gotten worse. We have become more divided. And that’s another reason why this silent majority is awakening. It’s an abject failure and rejection of so many people’s hopes when they voted for the guy.