Crazy Bernie Never Had a Chance

RUSH: Michael in Roxbury, Maine. Great to have you. You’re first today. Hi.

CALLER: How are you today, sir?

RUSH: I’m actually fit to be tied. I’m trying not to tell anybody about it. Since you asked, I have to be honest.

RUSH: But never mind that. What’s up with you?

CALLER: My question is, everybody seems to be talking about Trump and Hillary, Trump and Hillary, like it’s already sewn up, and nobody’s really speaking about Bernie Sanders anymore, and I’m just wondering why that is ’cause it seems to me like he’s got an awful lot more support than he’s getting credit for, I guess. And I just want to know what you have to say about that.

RUSH: What I have to say about that is that the deck is stacked against Bernie. It has been from day one. He was never going to win the nomination. He was in this to provide a foil for Mrs. Clinton, to make it look like she had some opposition and to present the illusion that she’s a tough fighter, that she can overcome opposition, that she’s not being coronated. The whole thing’s an illusion, and the proof of it is that Bernie is winning state after state after state and accruing hardly any delegates.

If this were happening on the Republican side — I mean, Trump’s winning and he’s getting a vast majority of delegates and they still think the game is rigged on the Trump side — can you imagine if Trump had decided is to run as a Democrat, and was doing the same thing to Hillary that Crazy Bernie is, and she was getting the delegates? Whoa. That’d be worth the price of admission. Are you…? Michael, are you a Bernie Sanders fan or are you just interested in politics and trying to figure out what’s happening on the Democrat side?

CALLER: Well, kind of both. I like what he has to say. He comes across to me as very honest, cares about the people. He wants to see some changes made, and I agree with the changes — 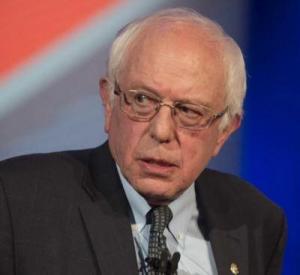 RUSH: What does he see…? Give me a couple of examples of things that he says that you like or agree with.

CALLER: People paying their fair share in taxes. You know, not bailing out the big banks, holding people accountable for the mistakes they know they made. Even before they made their mistakes, you know, they knew it was bad.

CALLER: I absolutely agree with you. I don’t disagree with you on that at all. But I just… Yeah, I’m just a little, you know, bummed out with how the situation is going, and change needs to be made.

RUSH: Why do you think…? Why are you animated or why are you inspired by hearing Bernie say he wants to raise taxes on the rich? Why…? How would that change your life for the better?

CALLER: I don’t think it would change my life for the better. I’m hoping it improves life for the people who really need it.

RUSH: What do you think the “fair share” is for the rich?

CALLER: Well, I know my father was a machinist, and he worked his whole life in the machine shop turning handles, and for every $1000 he made he had to pay $300 out in taxes. You know, that’s 30%. And you got big corporations, I guess, you know, from what I’m hearing, who are paying less than 5%.

RUSH: Well, but corporations don’t end up paying taxes. That’s been true since the beginning of corporations. They’re able to pass tax bills, for the most part, along to consumers at the wholesale and retail level. Corporations don’t pay taxes. But I don’t want to get into that with you because you’ll disagree with me on it. 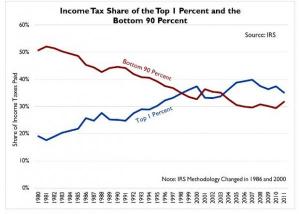 CALLER: Well, no. I won’t. I’m not very politically savvy. I just… Like you hear people say, I don’t know why, but I know what I like.

RUSH: Would you believe me…? I’m gonna give you some statistics — a statistic — here from something called the Tax Foundation, which is an independent group that studies who pays taxes. The top 1% of wage earners — and that’s over $1 million a year. The top 1% pay 44% of all income taxes.

CALLER: I did not know that.

RUSH: That sounds like they’re paying more than their fair share to me, if the top 1% is paying almost half of all income taxes collected. There’s a great… I have a very fascinating story today that I may get to. It’s about people that get ticked off on airplanes after having to go through TSA. They have to troop through and load up and sit down on the plane, and they pass through first class on their way to coach, and it just ticks ’em off. They get mad at the rich, the people up in first class. They see those big seats, lots of leg room, and they get mad at the rich. They don’t understand who they really ought to be mad at in that circumstance.