Memories of the Sacramento Days

RUSH: Patrick in Sonora, California, I’m glad you waited, sir. You’re next on EIB Network.CALLER:  Mega dittos from my safe space in the Mother Lode.

CALLER:  Gotta take you in the flashback machine real quick.  Two things. One, you were a celebrity judge in 1987 in Chico, California, when Chico State got named party school.

CALLER:  I was the deejay who played the music for the girls.

RUSH:  (laughing) Is that right? Way back!

RUSH:  It was a missed opportunity for you. Yes.

CALLER: A friend of mine was a huge fan. You went over to JB’s and he was the bartender there.

RUSH:  That’s right. That’s right. You remember when…? What was it? Chico was named the party school, but what was the absolute worst place in the world to live? Redding?

CALLER: Well, you were —

RUSH:  No, no.  Yuba City.  Yuba City was the worst the place in the world to live shortly after Chico was named the party school, and I went and did my program live from Yuba City and we started a refugee movement back down to Sacramento.

CALLER: (chuckling) The other memory is from your Grooveyard of Forgotten Favorites. I remember it had been a Monday because I was driving back to re —

RUSH:  Wait, wait, wait.  Hang on. I hate to… I misread the clock.  You had one less minute than I thought here.  Don’t go away out there.

RUSH: I want to go back to Patrick in Sonora, California. You had talked about how… You’re remembering various things that happened in the late eighties in Northern California involving me.  But what was the second point you were gonna make?

CALLER:  It’s your Grooveyard of Forgotten Favorites, something you taught us about out here on the media, and after I stopped laughing I realized how right you were.  And you said, “Here’s why the media does what they do, the same reason a dog licks himself: Because it can.”

RUSH: (interruption) Boy, you got a memory.

CALLER:  After I stopped laughing I realized how succinct and brilliant that was, ’cause the media is not covering this transgender thing the way normal people or sane people like myself do. I don’t have any daughters, but I have nieces; I have teenaged nieces; I have older nieces; I have a wife.  This is a safety issue.  This is about predator like the one in the story you just read, going into these bathrooms and taking advantage of it.  And it’s happening, but they’re not covering it, and it’s really interesting how they took, you know, gun control and turned it into “gun safety,” but they’re not treating this as a safety issue.

RUSH:  No.  That’s actually a good point.  “Civil rights.” You could you could legalize rape if you called it Civil Rights Act of 2016.

RUSH:  Well, you don’t hear about it that way.  That happens after the operation —

RUSH: — or after the “reassignment.”  I mean, after all, if a guy who “becomes a woman” still has the male genitalia, what are we talking about?

CALLER:  Well, you know, that’s gonna become known once they get in there.

RUSH:  Well, and then that new woman wants to use the women’s room?

CALLER:  Those are all private stalls.  They look like a woman. I mean, they did the Caitlyn Jenner look and he’s still got his plumbing, male plumbing. But he’s gonna go into a separate stall. 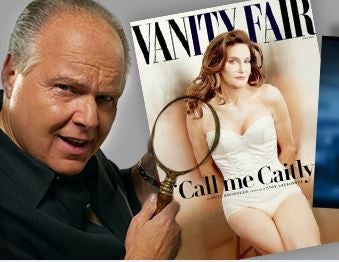 RUSH:  Well, I mean, that’s the thing.  By the way, speaking of Jenner, wasn’t there a story that he was having guilt or whatever? Not guilty.  It turned out not to be true.  He was denying it, but apparently he had regrets — that’s what it was — over going through the gender reassignment. He wanted to go back to being Bruce.  I think they went into… He denied that or some such thing.  Anyway, Patrick, that’s right. Here’s the thing about it — and, folks, don’t have an overreaction here.  My point is, the civil rights is another way the left gets its way.

Calling this a civil rights issue and Title VII and Title IX?  People don’t even know what those are.  I mean, some people might know what Title IX is if they’ve been impacted by it with girls and sports and college.  Other than that, nobody knows what Title IX is and they now don’t know what Title VII is.  Here comes the Regime saying, “Well, Title VII, Title IX of the Civil Rights Act 1994 updated as of 1985 specifying transgender…”  It doesn’t.  Transgender is not even mentioned as a word in Title VII or Title IX.

So then they go back and they say, “Well, the founders even tried to permit for this in…” The founders weren’t thinking transgender transshmender when they wrote the Constitution! But if you call it a civil right, then you automatically make it impossible for people to oppose it. Because if you oppose civil rights, you must be a racist.  That’s how it’s manifested itself in our society.  Civil rights issues are always race issues.  Most of them are.  For example, after the Rodney King riots in LA or any other, what have you, the civil rights division of the Justice Department goes in to investigate.

Anyway, Patrick, I appreciate the call.  I I do.