TSA Disaster Is Liberalism on Display

RUSH: How about these absolutely unacceptable conditions at airports, the lines to pass through security?  In Chicago they’re now advising people to show up three hours early for a domestic flight.  Now, I can tell you that back in the mid-nineties and even toward 2000, people like me, I’ll just use me, I relied on something.  I believed that demonstrable, unequivocally demonstrable government failures would, if properly explained, help to put a dent in the love and appreciation and support of Big Government and liberalism and the Democrat Party.

In this administration we have had disaster after disaster after failure after failure.  We’ve got Obamacare, which is a disaster, and the people in charge of it are laughing about how they lied to us.  They’re laughing on media in our face, how they laughed at us, how contemptible they hold us, how stupid they think we are.  Obama’s speechwriters with Charlie Rose laughing about creating a line, “If you like your doctor you can keep your doctor.”  And then we got Jonathan Gruber, the author of Obamacare, running around laughing and telling how they were able to lie and fool everybody.  Obamacare is something that nobody likes, nobody wants any part of.

You look at this transportation and safety, whatever it is, administration, I mean, it’s an absolute…  And you know, it may be on purpose.  They may be doing this to secure even more funding for the division. They may purposely be creating massive public anger, wanting millions and millions of travelers to shout to Washington, “Fix it!  We don’t care what you do, just fix it.  Here’s a blank check.”  And, yet, none of it seems, as best I can tell, none of it seems to cause people to question the government’s ability to do anything.  I’m talking about liberals and leftists.  I know we don’t need any conversion on our side.

But if this kind of example after example, failure after failure, boondoggle after boondoggle, if this doesn’t do it, why doesn’t it?  And there are answers, of course.  But this is unacceptable, what’s happening in these airports.

RUSH:  Let me grab a quick call here on TSA, because we’ve talked about that today.  This is Todd in Asheville, North Carolina.  Todd, great to have you on the program.  Hello, sir.

CALLER:  Hey, mega dittos, Rush.  Been an honor listening to you since Gulf War I.

RUSH:  Well, thank you very much.  I appreciate that.

CALLER:  And so, as the passenger census grows, so should the revenue to the TSA.

RUSH:  Oh, so you’re reacting to the point that some of this might be staged in order to get even more money come budget time?

CALLER:  Yes, because they’re collecting money based on passenger census, and it’s a lot of money.

RUSH:  Of course it is.  Look, let me go back to my original comment on this.  This is… Folks, this is outrageous what is happening at various airports.  Three hours now you have to show up early at Chicago O’Hare on a domestic flight, and three hours is not the half of it.  What you have to go through in that line!  I mean, if there’s ever a classic illustration of government inefficiency, inability, ineptness, incompetence, have-no-business-doing-this, this is it!  Healthcare is another.  The age-old question: Why does this not demonstrate to people that there are better ways?  Why?

And the answers to that, folks, are multiple.  Well, look at how capitalism has been destroyed — I mean, in terms of its image.  Look at how capitalism — in terms of education, school, college, high school, whatever — has been constantly attacked.  Government is never attacked that way.  Government is always, “At least they’re trying! Their intentions are good. They’re trying to help people.” The fact that it never works, that it’s horrible, that it doesn’t seem to help? 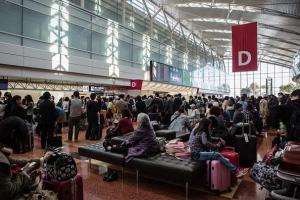 You can sit there and warn people about how inefficient, how horrible, how rotten things are gonna be.  When it actually happens, it doesn’t change people’s minds about government involvement in their lives.  It’s the most amazing thing.  He’s reacting to statement I made earlier that there are some theories that all this worsening circumstances at TSA counters at airports is on purpose, that the Regime is doing this on purpose to anger people to demand that this get fixed and the government do it.

It doesn’t get any better, doesn’t get any more efficient.  The very people who break something are then looked to to fix it.  It’s one of the amazing contradictions of my life.