RUSH: There’s a new poll out, and it’s in the Washington Post of all places.  This is going to devastate the hand-wringers on the left.  “Nine in 10 Native Americans –” that will be Indians, for those of you in Rio Linda. “Nine in 10 Native Americans say they are not offended by the Washington Redskins name, according to a new Washington Post poll that shows how few ordinary Indians have been persuaded by a national movement to change the football team’s moniker.” 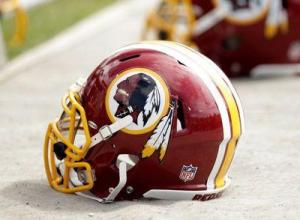 “The survey of 504 people across every state and the District reveals that the minds of Native Americans have remained unchanged since a 2004 poll,” which is 12 years ago, “by the Annenberg Public Policy Center found the exact same result.”

A 14-year-old poll identical to this poll.  Ninety percent of Native Americans are not offended by the Redskins name.

I saw something the other day, if you want to change the name and get rid of what’s really offensive about it, just call ’em the Redskins and boot “Washington.”  Did you see that? (laughing) Somebody sent me that as an email thing.

Trump Is Up Five!

RUSH: Rasmussen poll, Trump is up five over Hillary now.  By the way, speaking of that, the left, the Drive-By left, much of the elected political left, they are really turning on Crazy Bernie, yesterday and today.  They are getting fed up with Bernie, and they’re about ready to toss him overboard.  It’s gone on too long.  It’s gone on too far.

You would never know that if you routinely read social media.  If you spend time on Fakebook, if you read what people write about themselves on Fakebook and Twitter, and if you go to the movies and if you watch prime time TV or cable TV, if you watch any episodic television, you would think everybody’s having sex all the time, doing nothing else, and that you’re missing out, which may be true.  Average person, 0.45, I thought of that and I said, “Well, hmm.  I’m apparently getting an unfair share of somebody else’s time.”

RUSH:  The noted CBS correspondent Morley Safer has passed away at age 84.  When these things happen, people routinely ask, “Did you know Morley Safer?”  Well, I didn’t know Morley Safer, but I had two encounters with him.  One was on the phone where he called me back in my TV show days, not to request my appearance on the show, but to quote me about something in somebody else’s appearance he was putting together.  He ended up arguing with me about what I thought.  I thought, “Well, this is strange.

“You’re calling me to ask me for my input on something you’re doing, and you’re arguing with me, which was fine.”  The other time is more noteworthy.  I’ve told the story before.  I was profiled once on 60 Minutes when something got past somebody there and they ended up profiling me. And then they had an anniversary celebration dinner, CBS 30 years or 60 Minutes 20 years, or 50 years in 60 Minutes, whatever it was.  And it was at the Temple of Dendur exhibit at the museum on Fifth Avenue in New York.

I happily accepted and I went to this dinner, and I happened to note that I was seated at the same table as noted professor Camille Paglia, who, unbeknownst to the people at CBS, was an acquaintance of mine.  We were email correspondents.  We had some things in common. We’d very much enjoyed each other’s company in that way, even though she’s an ardent feminist and leftist. But she’s not… She has very little in common with the everyday, modern, weirdo, wacko leftist that you see either on campus or in the news — and she admires creativity and art.

She’s a professor of the arts, and I’d spoken to her about her reviews of the works of Madonna and so forth asking, basically, how she does her job. You know, how she approaches her job.  Anyway, they seated me at her table expecting fireworks.  The people at 60 Minutes had no idea we knew each other and they just expected that here I am, Mr. Conservative Firebrand who hates liberals. I’m gonna punch ’em out, walk out, do whatever. Make a scene.  And all night long… I didn’t know this at first.

All night long, various 60 Minutes people are the strolling by our table.  Morley Safer came by once and Steve Kroft came by once and Ed Bradley walked by a couple times and Don Hewitt walked by, and I thought, “What is this?”  And then they’d stop and chat with each other, and when they walked by the table, they had these snarky grins on their faces like, “Hey, Limbaugh, do you know you’ve been set up yet?”  But it wasn’t like that. They were expecting fireworks that never, ever happened. And I’m sure when the evening was over, they were dumbfounded.

I don’t know what, specifically, they expected to happen, but you can bet that seating me at Camille Paglia’s table, they thought there was gonna be some fireworks, a scene or something, and they wanted to be around to see it, which is probably why I was invited in the first place to the thing.  And those are my two experiences.  And they didn’t say anything. None of these guys said anything as they walked by.  It became obvious, they walked on by so much. That’s how I noticed it. Every five minutes one or two of them is walking by, looking at the table.

The Establishment Left Is Really Turning on Crazy Bernie Sanders

EgyptAir Flight Blown Out of the Sky

RUSH:  Well, they found some wreckage already of the Airbus A320 EgyptAir flight, blown out of the sky today, an urgent investigation is underway.

RUSH: The Politico.  “Poll:  Voters Want an Independent to Run Against Clinton and Trump.”  Did you know that?  Yeah, let me tell you about it.  “Either Hillary Clinton or Donald Trump is likely to be elected president in November, but voters are yearning for another option.” You know why?  ‘Cause there’s a poll.  The results of a Data Targeting, that’s capital D, capital T, Data Targeting poll released yesterday.  Well, who is Data Targeting?  Well, I looked ’em up.  They are an outfit run by a Republican strategist named Joel Searby, and it turns out that Joel Searby is working with Bill Kristol and others to recruit a third-party candidate.

So they went out and they did a poll.  And, lo and behold, they got results that said a significant number of Americans want a third-party candidate, ’cause they know that so many Republicans are susceptible to poll results.  I mean, you gotta give ’em credit.  They’re still flailing away out there at this.  Yeah.  Yeah, Romney cashed in his chips on that.  He’s out of that.

Assange Is Behind the Times: iTunes Vulnerability Fixed Five Years Ago

RUSH: By the way, you may have come across a story today that Julian Assange, WikiLeaks, has informed Apple that iTunes is wide open on the back end for hackers.  That goes back to 2011.  It’s been fixed.  Don’t panic.  Julian Assange is a little bit behind the times in this.  That’s, what, five years ago?  Apple’s constantly updating their security.  That was dealt with a long time ago.