How About Voting for Gary Johnson, Rush?

CALLER:  Thank you for taking my call, Rush.

CALLER:  Hey, so, I’ve been a registered Republican for 30 years, and like a lot of folks, I’m not real happy with where we sit right now with election choices.  And I know conventional wisdom states that third-party candidates just don’t have a chance in our system, but this has been a year that’s stood conventional wisdom on its ear, and I went to this nonpartisan website, and it turns out I side with Libertarian Gary Johnson.  And it occurs to me that probably most of Bernie’s followers would go to him and most of the disaffected Republicans might be interested.  And then you look at the in-betweens with the independents, and maybe there’s a chance to have a sane choice between Trump and Hillary.  And I’d like your thoughts.

RUSH:  Well, Gary Johnson’s name comes up regularly — by that I mean once or twice a week — here on the program, and every four years, every presidential year we entertain calls from people who want to go the Libertarian route because either they’re Libertarians or they’re just turned off by the Republicans or Democrats.  And every four years, they think that’s the year that the third-party candidate can win.  And the third-party candidate never does.  It just not… It’s not arithmetically possible.

There aren’t enough disaffected Republicans and Democrats to go third-party. The only way it could happen, Keith, is if the third-party candidate could get enough votes to prevent either candidate from getting 270 electoral votes, in which case the election would then be decided by the House of Representatives.  The House of Representatives would elect the president, by vote, among the top three vote getters in the general, which in this case would be Trump, Hillary, and Gary Johnson.  And since the Republicans control the House, Donald Trump would be elected president.

The Republicans in the House would pick him — and, if the Democrats ran it, it would be Hillary.  Neither of them are gonna vote for Gary Johnson.  I also think — and I mentioned this yesterday.  I wouldn’t be so… A lot of people say, “It’s gone too far Rush! It can’t happen; it’s not possible. There’s no way they could mend enough fences; it’s gotten too brutal.  I mean, Barbara Boxer is out there saying she feared for her life at the Nevada convention!” 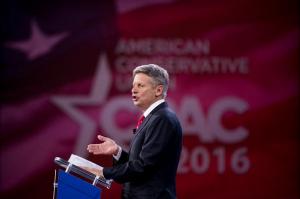 If Hillary were to put Bernie on the ticket as the veep, that would eliminate all Democrat disaffecteds going to Gary Johnson.  If you put Bernie on the ticket, then his voters stay Democrat, and Hillary may be forced to seriously consider something like this.  She’s… Her momentum is plummeting.  And it may be — I don’t know — that if Bernie’s her vice presidential nominee, then some of his voters (eight, 10% of them) are saying they’re interested in voting for Trump. That may hold up; it may not. If he’s on the Democrat ticket…?

Bernie would do it in a heartbeat, I think.  It’s Hillary that would be the stumbling block.  Although it may be the other way around.  But either way, I think the scenarios add up to, once again, it being a really, really tall hill to climb for a third party.  It’s just… There’s too much pro-Trump momentum out there. Even though you cite that a lot of people on the Republican side are fed up with him, don’t like him, not happy, and so forth, there still isn’t… I don’t know if there are… The numbers are not there for a meaningful third-party candidate victory.  A third party usually takes away from Republicans and would elect Hillary Clinton.  And I think that probably holds up theoretically this year, too.